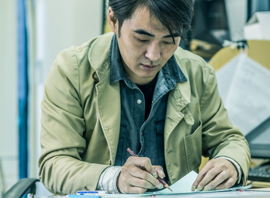 , Komino was an animator previously affiliated with Studio Satelight

before leaving due to distrust with the production staff.[1] After working years of freelance, he is currently the founder and president of Studio Lunch BOX as of March 2017.

and participating in the Gibiate Project, but has attracted much attention in recent years for his work on Stardust Crusaders and the JoJo's Bizarre Adventure franchise in general.

Joseph vs Straizo by Komino

Jotaro vs Avdol by Komino