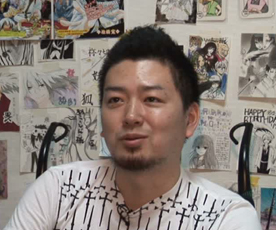 Nura: Rise of the Yokai Clan

Hiroshi Shiibashi (椎橋 寛, Shībashi Hiroshi) is a Japanese manga artist. He was one of Hirohiko Araki's assistants during the serialization of Steel Ball Run along with Yasuki Tanaka.[2]

Hiroshi Shiibashi was born in Suita

, on June 6, 1980. He graduated from the Osaka University's Faculty of Arts in the Department of Imaging. He begins his career in manga as an assistant for Hirohiko Araki. During this period, he becomes friend with Yasuki Tanaka. Shiibashi and Tanaka make regular shout-out to each other's work, for instance the character of the "Snow Lady" from Nura: Rise of the Yokai Clan

In 2002, Shiibashi publishes his first one-shot "Aramata" in Business Jump

. He publishes several other one-shots from 2002 to 2008 for Shueisha, but also the Osaka University of Arts. His first serialized work is Nura: Rise of the Yokai Clan

is published in "Weekly Shonen Jump".