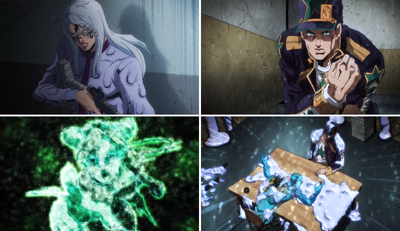 The Visitor, Part 2 (面会人 その②, Menkainin Sono 2)[2] is the fourth episode of Stone Ocean and the one-hundred-fifty-sixth episode of the JoJo's Bizarre Adventure anime. The episode covers the last page of chapter 13 up to chapter 17 of the original manga.

DIO's follower Johngalli A. aims for revenge. The boy risks his safety to help Jotaro and Jolyne, but she refuses to leave the kid behind.

Jolyne and Jotaro are stuck in the meeting room against Manhattan Transfer, a small satellite Stand floating around. Jotaro tells Jolyne to be silent as to not reveal her location, having guessed that it can read the air currents. Since Johngalli A.'s position is unknown, Jotaro recommends to focus on attacking the Stand so that the damage will be transferred to Johngalli. Suddenly, Jolyne deploys a thread against Jotaro's advice.

Meanwhile in the men's ward, a patrolling guard passes by Johngalli A. who is peacefully sitting by a window. As soon as the guard disappears, Johngalli reassembles his rifle made from his cane and various parts hidden on him. While he takes aim, Johngalli tells himself some principles of sniping, notably the need for a sniper rifle to be unified with the shooter's bone structure, which offers stability. He continues his rant and says that while meteorologists are right in stating that the wind is unpredictable, it can still be read. By comparison, he likens the seemingly random movements of a flying fly to the wind and manages to predict its movements, crushing it by letting a bullet fall at the right moment. Johngalli then analyzes the situation in the meeting room and perfectly sees Jolyne and Jotaro's positions. Enraged, Johngalli A. prepares to end the Joestar bloodline to avenge DIO.

Back at the meeting room, Jolyne has activated the fire alarm by exposing the sprinklers to a lighter's flame. Manhattan Transfer's flight path has become erratic and thus Jolyne thinks that its ability to read the air has been impaired by the many water drops. She prepares to attack the Stand but Jotaro interrupts her, telling her to watch more closely. Jolyne thus realizes that Manhattan Transfer is actually avoiding every single drop of water, which means it can still read the air. Again, Jotaro tells Jolyne to stick to the wall. Suddenly, the young boy calls out to Jolyne, telling her to kick a block at the base of one of the pillars near her. Jolyne kicks the block, uncovering a secret passage. Jotaro wants to quickly use the passage to hide from the enemy, but Jolyne objects. She's noticed that Manhattan Transfer has slipped away, meaning that Johngalli A. is pursuing the boy in order to kill him. Determined to protect him, Jolyne breaks the door lock instead and steps into the hallway. Jotaro sighs, though he still follows her.

Manhattan Transfer disappears into an air duct as Jolyne carefully enters the hallway. While the staff scrambles in the background to investigate the cause of the alarm, Jolyne examines the hallway carefully and discovers another secret passage behind the fire hose. She enters the passage, a tunnel dug through the wall. Meanwhile, Johngalli A. has read the air and determined the boy's height, and has decided to kill him first because of his troublesome knowledge of the prison's layout. Jotaro enters the prison's hallway. When a guard spots him and tells him to go back, Jotaro uses Star Platinum to elude him. Jolyne reaches the end of the tunnel, which ends into a vertical service shaft covered in pipes. Hanging from the pipes, Jolyne peers down into a machine room and sees Emporio entering a sewage pipe and hiding in the water. She is reassured, thinking that Johngalli A. will be unable to detect him, but suddenly the nuts linking two parts of the sewage pipe burst out. It is Manhattan Transfer which is redirecting bullets shot through the hole of an extractor fan. Johngalli A. managed to track the boy and uncover him. Now, the sniper has a clear shot into the boy's heart. Jolyne immediately weaves a large net and deploys it to catch Manhattan Transfer, but it only serves to indicate Jolyne's exact position to Johngalli A. who switches his target and shoots. Manhattan Transfer redirects the bullet right at Jolyne's head, but the bullet misses. Jolyne reveals that she's preemptively burst a gas pipe, creating a separate layer of gas that made Johngalli A. misread the air. Manhattan Transfer is caught in Stone Free's net and Stone Free is able to crush the enemy Stand before Johngalli A. can reload his rifle.

Having defeated Manhattan Transfer, Jolyne decides to ask Emporio who he is and how he's in prison. As she slides down a pipe, the bone that the boy had given to her catches onto a piece of machinery and slightly hurts Jolyne. She takes it out and asks the boy what it is and why he has a human bone in his possession. Nervous, the boy can only mutter that she must hold on to it. Jotaro then reappears, having slid down the shaft too. When Jolyne informs him of the situation, she suddenly sees Johngalli A. creeping near thanks to the reflection on the puddle. She catches a glimpse of Johngalli hiding between the pipes and alerts her father. Jotaro is skeptical, saying that he's probably been out of reach and too far to close up to them so fast, but Jolyne spots him hidden in the vertical shaft from which she's come. Jotaro decides to believe her and crashes another pipe with Star Platinum, creating a spark that lights up the gas. The fire goes up the shaft and burns Johngalli, who falls down and crashes on the ground. With the enemy definitively beaten, Jolyne turns to ask the boy if he's alright but he has disappeared. Jolyne frantically searches for him, confusing Jotaro as he never was aware of anyone besides the two of them nor did he spot any secret passage. Jolyne gets angry, thinking that Jotaro is messing with her since the only way he could have gone down here is through the boy's secret tunnel. Jolyne then realizes that something is wrong. Finally, she notices that Jotaro's wounds have disappeared and that the wound Johngalli A. inflicted on her has also disappeared. Furthermore, Johngalli A. has disappeared and in his stead lays the corpse of the meeting room's guard. Confused, Jolyne grabs the guard's corpse to examine it and make sure it's real but then a strange liquid oozes from her hand. Reminiscing the boy's warning about a fate worse than death awaiting her, Jolyne sees the world, the people besides her as well as herself covered in a strange goo. Finally, Jolyne realizes that she's having hallucinations, finding herself in the meeting room covered in goo, with Jotaro asleep in front of her. The real attack was a hallucination that trapped Jolyne and Jolyne in a dream and covered them in acid that is slowly melting them.

Immobilized, she examines the room to see what was real and what was an illusion. From the unconscious guard to the photo of Johngalli A. on the table, Jolyne concludes that everything was normal up to the moment she and Jotaro noticed the strange cigarette on the ash tray. Everything afterward was a hallucination meant to trap her and Jotaro as they were being digested by the acid. She realized that the bone the young boy gave her has saved her as she was woken up when she squeezed it unconsciously. Jolyne tries to deploy a thread to reach her father, but it dissolves instantly. Jolyne thus is in a helpless situation as the acid slowly dissolves everyone in the room. In a burst of rage, she summons Stone Free.