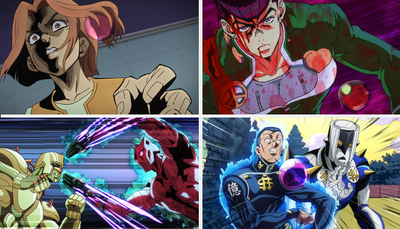 Crazy Diamond Is Unbreakable, Part 2 (クレイジー・は砕けない その2, Kureijī Daiyamondo wa Kudakenai Sono 2) is the thirty-eighth episode of Diamond is Unbreakable and the one hundred twelfth episode of the JoJo's Bizarre Adventure anime. It covers Chapter 431 through Chapter 435.

The final fight against Kira continues. Josuke and Hayato Kawajiri must retreat inside of a house to hide. Unfortunately, Kira somehow manages to pilot his air bomb towards Josuke without having to approach the house.

Kira apologizes to his boss as Kosaku Kawajiri

The skies clear up on Morioh as the battle between Yoshikage Kira and Josuke Higashikata continues. Beforehand, Kira must call his boss and deeply apologizes for his anticipated delay. Eyeing the house where Josuke and Hayato have hidden inside, Kira is surprised by a suspicious neighbor and promptly kills him.

Josuke is caught in the bombs' explosions

Meanwhile, Hayato tries to call the outside but the phone is broken. Josuke finally acknowledges that Okuyasu Nijimura is dead and vows to avenge his friend. The two expect Kira to come and wait in ambush, but Hayato suddenly feels a gust of wind and realizes that one of Killer Queen's air bombs has slipped into the house and is heading toward Josuke. Indeed, Kira knows where Josuke is through undisclosed means. Josuke scatters some ashes to go out of the bubble's path, but the bubbles also somehow follow him. Unable to guess Kira's methods while Kira is standing just outside the property, Josuke willingly takes the explosion head-on, guarding himself with Crazy Diamond. His left leg and stomach are impaled by wooden debris for the trouble.

Josuke uses Crazy Diamond on a shard to Kira, who takes damage as a result

At the same time, Josuke breaks a vase and throws a glass shard at Kira, who was on guard and deflects it with Killer Queen. This resourcefulness is exactly why Kira is keeping his distance but Josuke outsmarts Kira as he creates his own automatic homing attack by making the dried blood on the shard be attracted to the dried blood on Kira's jacket. Kira takes the shard on the back as a result.

As Kira takes cover, Josuke sees through the window that Kira is still holding his mobile phone. Killer Queen then sends another bubble hiding inside the house while Crazy Diamond shoots a shard again. However, Josuke then asks Hayato to give him his lighter. Burning Hayato's jacket, Josuke forces Yoshihiro Kira out of his hiding spot. Indeed, Josuke has guessed that Kira would be calling his father for help and that Yoshihiro would be hiding and leaking Josuke's location. As revenge, Josuke whispers on the phone and tricks Kira into killing his own father. Josuke reveals himself to Kira and at the same moment, the second shard hits Kira again. 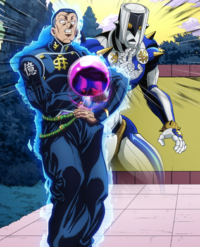 Josuke then comes out of the house; despite their injuries, both Stand Users are determined to win the fight. Another close-quarters fight ensues, but Stray Cat uses his bubbles to protect Killer Queen and himself from Crazy Diamond's attacks. Just as Josuke is about to be hit by another air bomb, he is saved by a very much alive Okuyasu who teleports the bomb and erases it.

Kira is cornered by the Joestar group

The student then explains that at the antechamber of the afterlife, he was visited by the spirit of his brother Keicho Nijimura who, despite Okuyasu's wish to join his brother, tells him to think for himself what he wants the most. For the first time, Okuyasu manages to take a decision and comes back to life. Okuyasu then effortlessly steals Stray Cat from Killer Queen, driving Kira further into a corner as Jotaro and the others arrive on the scene. Injured, surrounded on all sides, Kira is under tremendous pressure.

“
Josuke and Kira are giving it their all in this final battle. The fight initially happens at a distance, but the two eventually duke it out head-to-head, a struggle that the whole production team worked on. Mr. Kato himself checked and corrected the 100 last cuts of the episode, most notably the beautiful scene where Okuyasu dreams of meeting with his brother (was it really a dream though?). We also get explosions, blood spraying everywhere and even an exploding house. Rio, its proprietor, should have a rather big surprise when she comes home. (laughs) Speaking of Rio, the scene with the panty thief made quite an impression. Although it's useless to the plot, without it the ensuing fight would have been duller. The fact that we added this small comedic moment, which is insignificant at first glance, increases the dramatic side of the battle. In fact, allowing some time for this moment was planned from the start. (laughs) I don’t know if I got lucky, but I worked on and corrected the first 100 cuts of the episode, including this scene. I cannot say why I wanted to draw this panty thief, but characters like him are the ones that give JoJo’s universe its uniqueness.
”
—Naokatsu Tsuda, Blu-Ray limited edition commentaries