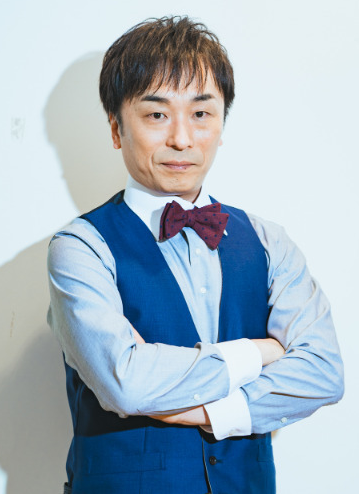 Tomokazu Seki (関 智一, Seki Tomokazu) is a Japanese voice actor, actor and singer. He is credited for his role as Enrico Pucci in the upcoming JoJo's Bizarre Adventure: Stone Ocean anime. He is honorary president of and affiliated with the agency Atomic Monkey.

Seki is well known for a wide variety of roles in other works, including Rob Lucci from One Piece, Domon Kasshu from Mobile Fighter G Gundam, Gilgamesh from Fate/stay night, Kanji Tatsumi from Persona 4, Hashida Itaru (Daru) from Steins;Gate, Panda from Jujutsu Kaisen, Sanemi Shinazugawa from Demon Slayer: Kimetsu no Yaiba, and Hadlar from Dragon Quest: The Adventure of Dai (2020).

When Seki was a child, he frequently watched stage performances and movies and wanted to be an actor. However, he was not comfortable with publicly showing his face as a celebrity (although he stated that this is not the case now) and decided to become a voice actor instead. Originally, he had been enrolled in a regular high school, but decided that wasn't enough, so he attended training schools such as Katsuta Voice Actor Academy and Haikyo Voice Actors Studio. This later became one of his reasons to drop out of university and continue to pursue a career in voice acting.[2][3]

His debut as a voice actor was dubbing the role of a farmer in the foreign anime Reporter Blues in 1991. In 1993, he received his first regular role as Tomáš Masaryk in Mobile Suit Victory Gundam. After getting casted as Keisuke Takahashi in the first season of Initial D in 1998, one of his breakthrough roles, he decided to get a driver's license to perform better for the role.[4]

Aside from voice acting, Seki is also an avid collector of manga and figurines. In his YouTube channel, he showcases merchandise from which he had played a part in, such as Kamen Rider, the Fate series, Persona 4, Doraemon, and many more. He is a big fan of Getter Robo and owns an almost life-size statue of the robot along with his other collections.

Before shooting for his voice cast reveal as Pucci in the pre-distribution event, Seki arrived an hour early just to shoot an extra dramatic scene for his entrance as a joke. According to him, being a voice actor for JoJo is a challenge and required him to do extensive research for his role as Enrico Pucci.[6]