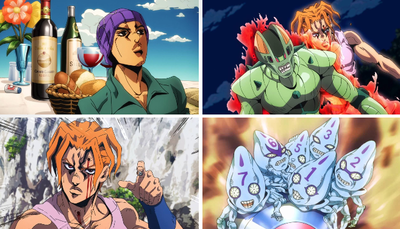 Sex Pistols Appears, Part 2 (セックス・ピストルズ登場 その②, Sekkusu Pisutoruzu Tōjō Sono 2)[1] is the eighth episode of Golden Wind and the one hundred twenty-first episode of the JoJo's Bizarre Adventure anime. The episode covers from Chapter 464 to Chapter 467 of the original manga with parts taken from Chapter 508.

A flashback is shown revealing Mista's carefree lifestyle and skill in a gunfight. Back in the present, Mista engages Sale on his own but his mission is complicated when it is revealed that Sale's Kraft Work can fix objects in place, preventing Sex Pistols from hurting him.

An episode recap summarizes how Guido Mista ends up on Capri pursuing alone the unknown enemy up to a starting truck.

Mista's past is revealed: he was once an ordinary teenager, who lived a simple life centered around enjoying the simple pleasures like food or pretty girls and never having to worry about money. However, one evening, Mista witnessed a man beating down a woman. Without thinking, Mista rescued her and beat the thug, causing the latter and his accomplices to shoot at him. Miraculously, or perhaps because the shooters were drunk and couldn't keep calm enough to aim, they all missed. Standing in the middle of a hail of bullets, Mista wrestled a gun out of his assailant, calmly reloaded it, and shot four times, hitting them all in the head.

Now on Capri, Mista aims at the truck driver but sees at the last moment that the driver's leg is uninjured and shoots toward the real enemy hidden on the roof of the cargo box. Sale, finally revealed, takes a bullet in the forehead. Surprisingly, Sale stands back up, cursing Mista.

Sale surprisingly survives a bullet to the head

Mista is shocked to see someone who can survive a bullet in the head while Sale deducts that he must kill Mista to regain his anonymity. Mista shoots again three times, but Sale reveals his Kraft Work, a short-range power type Stand that easily deflects each bullet. With his gun empty, Mista tries to get away from the truck but realizes that he's stuck to the handle. The driver too is stuck in a driving position, and bullets are seen floating alongside Sale. Thus, Mista understands that his foe's ability is to lock object in position in regard to a given reference, be it the truck or over Sale's own skin, explaining how the bullet couldn't really hurt him. With Mista having both hands full, Sale gloats about the treasure and throws a Stand punch, but the gunslinger reveals that he's hidden bullets inside his hat. He shakes his head, the bullets falling down and redirected inside the chambers by Sex Pistols, and shoots again at point-blank range. While Kraft Work deflects the first bullet, it is too slow to block the second one hidden behind. Sale is hit in the throat and falls off the truck, freeing Mista from his ability. However, the fight isn't over yet.

At the marina, Giorno understands that Mista has gone up the island. On the truck, Mista realizes with horror that he's only got four bullets left, a sign of bad luck. Forcing the driver to stay behind the wheel, the gunman rethinks his strategy and theorizes that Sale could be vulnerable inside his body. He suddenly sees Sale in front of the truck, having managed to catch on the truck because of the winding road and by throwing locked pebbles in the air to scale them. Mista prepares to shoot, but Sale reveals that Kraft Work has been tapping a bullet for some time. Releasing the bullet, the enemy Stand User manages to shoot Mista with his own bullet by stocking kinetic energy up. Hit in the gut, Mista misses three shots while Sale jumps back onto the truck.

A shard of Mista's bullet hits Sale, defeating him

Sale then resumes tapping another bullet to finish off Mista, but the gunslinger, encouraged by the fact that he hasn't four bullets anymore, proudly announces that his last shot will be the decisive one. Mista shoots, but Sale opens his mouth, showing that even if he was hit inside his body, Kraft Work would still block the bullet. Announcing his victory, Sale releases his own bullet, but Sex Pistols has hijacked it, exploiting Sale's overconfidence and kicking it back into him. Summoning in Kraft Work, Sale sees too late that Sex Pistols has kicked the bullet to crack it in two and one of the shards hits right into the bullet Mista put in Sale's head earlier. Having a bullet pushed into his brain, Sale falls to the ground, defeated.

Ordering the truck driver to go back to the marina, Mista drags Sale back into the radio room. Immediately after, Giorno barges in and intimidates the truck driver into going back up the island. 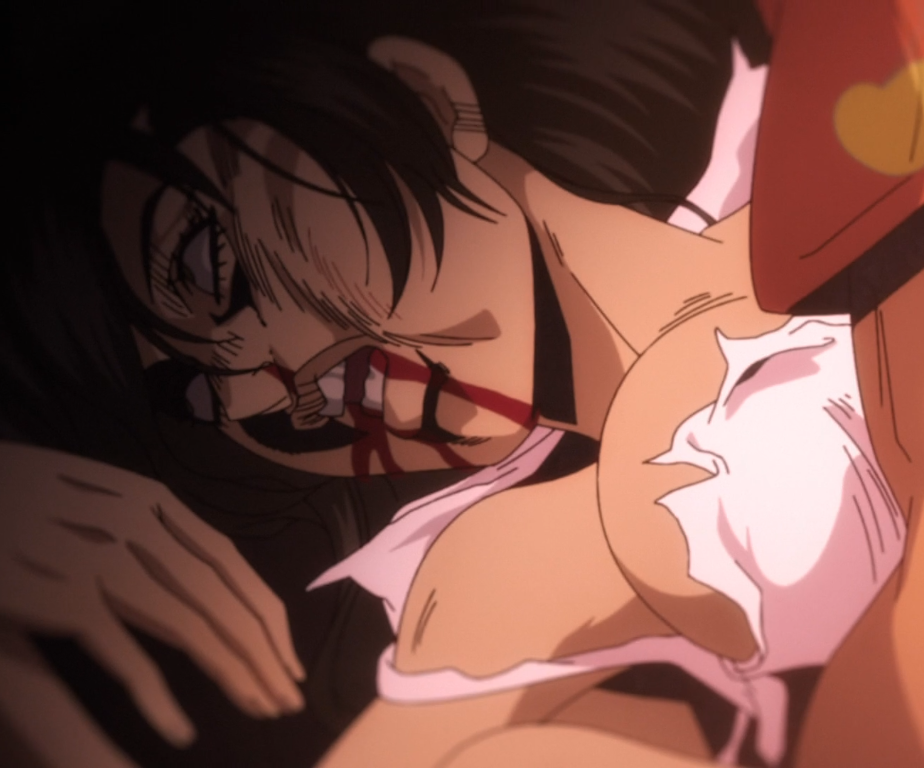