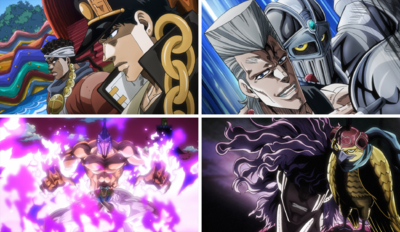 Silver Chariot (, Shirubā Chariottsu)[1] is the fifth episode of Stardust Crusaders and the thirty-first episode of the JoJo's Bizarre Adventure anime. It covers Chapter 125 through half of Chapter 127 of the manga.

The Joestar Group are challenged by Jean Pierre Polnareff, a French Stand User sent to kill them. Avdol steps in to fight Polnareff and his knight Stand Silver Chariot.

The Stand-wielding Frenchman introduces himself as Jean Pierre Polnareff, another assassin sent by DIO with the ability of swordsmanship great enough to cut through fire itself. After a brief demonstration of his Stand, he leads the group to the nearby Tiger Balm Garden to courteously allow Avdol to use his flame abilities without restraint. The fight begins almost immediately, though not before Polnareff makes a prediction of Avdol's defeat at the hands of his own Stand.

The duel between Avdol's Magician's Red and Polnareff's Silver Chariot

Silver Chariot starts the fight off with a flurry of sword strikes, most of which Magician's Red quickly dodges and counters with several fire blasts. Polnareff further demonstrates Chariot's power by deflecting the shots towards a nearby statue and carving it to resemble Magician's Red. Avdol retaliates with his special technique, Crossfire Hurricane, and launches an Ankh-shaped flame at Polnareff, who is able to once again deflect the blast at Avdol himself. Seemingly burnt by his own Stand, as predicted by Polnareff, Avdol launches Magician's Red at Chariot. Polnareff strikes back, but upon contact realizes the figure he had lit on fire earlier was not Magician's Red, but the statue he had carved himself. Avdol follows through with yet another Crossfire Hurricane with Polnareff taking the full force of the attack and is severely burnt.

Before the group is able to leave, Polnareff introduces his Stand's special ability, which is achieved by shedding its armor. In this form, Chariot's speed greatly increases up to a point where it is able to produce several afterimages. Though overwhelmed at first by the Stand's onslaught of attacks, Avdol reveals a variation to his previous technique, Crossfire Hurricane Special, which is able to strike Polnareff by shooting several ankhs, one of which comes straight out of the ground. Defeated, Polnareff accepts his fate to die but is spared when Avdol recognizes his act of chivalry. The group discovers another flesh bud on Polnareff's forehead, which Jotaro is easily able to remove.

At the docks, Polnareff introduces himself once more and shares a story of how his sister was murdered years ago by a man with two right hands. He reveals that he had met DIO in Cairo days before and had been promised help finding the man who killed his sister. Polnareff realizes that the culprit is likely working for DIO and decides to join the group on their journey to Egypt.

“
I will talk about the animation for this episode in detail. First, it was directed and storyboarded by Mr. Suzuki, the series director.

But we have to also talk about the young Shunichi Ishimoto, who was an animation director for the first time. He was assisted by Masahiko Komino, the chief animation director and character designer, whose advice and influence have resulted in these dense drawings.

We initially wanted to create a 3D model of the Tiger Balm park in Hong Kong; it soon proved to be too complicated, with an unacceptable value for money. Thus, we've backtracked toward the standard 2D backgrounds.

Avdol and Polnareff enthusiastically battle by launching their best attacks, not without showing off in the process. After several back-and-forths, Polnareff is finally defeated. Personally, I like the characteristic color tones applied in this scene.

Since the first episode, the omnipresence of fights tends to wildy increase the number of animation frames. This episode holds the record of around 15,000 drawings. Just like in the first one, this is because of Magician's Red's flames. It reminded us that fire also burns through animation frames (laughs).

Finally, it's not specific to this episode, but the actions scene are this cool because of the animation team of course. I want to thank them for that.