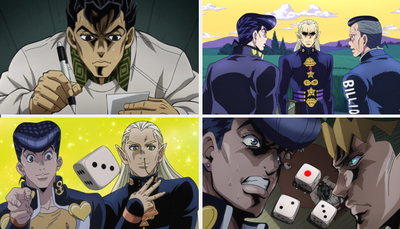 I'm an Alien (ぼくは宇宙人, Boku wa Uchūjin)[1] is the twenty-seventh episode of Diamond is Unbreakable and the one hundred first episode of the JoJo's Bizarre Adventure anime. It covers Chapter 377 through Chapter 381 of the manga.

Josuke and Okuyasu meet Mikitaka Hazekura, a self-proclaimed alien. Although Josuke doesn't know if he can believe Mikitaka, he senses an opportunity to use Mikataka's shapeshifting powers and get money quickly.

In search for other Stand users, Yoshihiro is guided toward a strange-looking teenager and decides to fire the Arrow at him. When it touches the man, it bounces back down the high herb, leaving only a scratch, to Yoshihiro's surprise.

Summer has arrived, and many tourists are coming to town as Jotaro and the Speedwagon Foundation's investigations are fruitless. One night, Kira practices Kosaku Kawajiri's writing while struggling against his murderous impulses, with his nails growing at an unnatural pace. When Shinobu enters to give him some tea, Kira almost strangles Shinobu, but she recoils in surprise at his touch. Shinobu mistakes it as a gesture for sexual advances. Unbeknownst to the two, a camera is hidden at a top corner of the room's ceiling.

The next day, Josuke and Okuyasu spot a series of crop circles in the middle of which is laying the strange man from earlier. The man wakes up and presents himself as a being coming to Earth. Josuke and Okuyasu first take his claim as a joke, but cannot understand his odd behavior, first demonstrated when he treats tissues from a box offered by Josuke to be food. As the man follows them, eventually proposing chilled ice-cream cones from his bag, the duo begins to think of him as delusional and try to debunk his claim. When the word "alien" is brought up, the man instantly identifies as it. When some firetrucks pass near them, the siren causes the man, Nu Mikitakazo Nshi, to panic, making Okuyasu leave the scene to get away from him. When Josuke tries to comfort him, he transforms into sneakers and propels Josuke away from the sirens. Now on the roof of his high school, Josuke tries to fake-out a punch with Crazy Diamond, but the alien doesn't react to or seem to see the Stand, convincing Josuke that Nu is an alien and not a Stand user. Nu is grateful, and wants to reward Josuke for "saving" him from the siren. Josuke, who laments that his mother froze his bank account after finding out about his lottery winnings, asks Nu to transform into a die, managing with difficulty to explain to him its looks and its use.

Josuke tries to keep his laughter

Later, Josuke heads to Rohan's house, begging the manga artist to play a game of dice in order to make money. Rohan accepts because he wants to take all of Josuke's money, but insists on using his own dice. Unbeknownst to Rohan, Josuke planted Nu in Rohan's house already. Setting the rules of a game of Cee-lo, Josuke rolls first and obtains a triple six, winning the triple of his wager and thus six thousand yen. Rohan plays and obtains a 1-2-3, and loses the double of his ten thousand yen wager. As Nu has no sense of subtlety, Rohan is now suspicious that Josuke is somehow cheating.

“
This episode is the start of new cour, so it was up to me again to not only handle the storyboard, but also set the overall tone for what's to come. Though I also did it because it's a comedy episode. (laughs) Beginning from here, the show will feature several episodes where certain elements are heavily altered from the manga.

A new character enters the scene, Mikitaka Hazekura, voiced by Mr. Yasuyuki Kase. I find his deep voice perfectly fitting for the character. Since it takes quite a bit of time to draw all of his transformation sequences, I also helped supervise the painful process of length adjusting each scene to fit the episode.

Rohan’s facial expressions also required a lot of work. And once again, we had to resort to CGI for the dice during his and Josuke’s duel. Other than Harvest, we rarely work in CGI, although it would have made our work a lot easier in several cases. (bitter laugh).

Here’s some trivia: Mikitaka only has his nose ring in this episode because one of the ladies from the animation team told me he was cooler without it.
”
—Naokatsu Tsuda, Blu-Ray limited edition commentaries