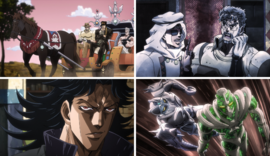 Lovers, Part 1 ( その1, Rabāzu Sono Ichi)[1] is the sixteenth episode of Stardust Crusaders and the forty-second episode of the JoJo's Bizarre Adventure anime. It covers the second half of Chapter 160 through the first few pages of Chapter 163 of the manga.

The Joestar Group have defeated Enya the Hag and brought her with them to Karachi. However, the assassin Steely Dan shows himself and kill Enya. Worse, Steely Dan's microscopic Stand Lovers has entered Joseph's brain and is using the old man as a hostage.

As the group stop by a kebab shop in Karachi, the store owner turns out to be Steely Dan, wielder of the Lovers Stand, who gloats as Enya is killed by some of DIO's flesh buds that Steely Dan had implanted in her body to keep her from revealing the truth. She dies, still believing in DIO rather than telling Joseph the truth about DIO's Stand. Jotaro has Star Platinum attack Steely Dan, only for Joseph to be simultaneously thrown back. Steely Dan reveals he has used his microscopic Stand the Lovers to enter Joseph's ear, where it causes any pain inflicted on himself to be amplified and sent to Joseph, even paying a child to hit him with a stick to prove he is not lying. He also reveals the Lovers will begin implanting a flesh bud which will kill Joseph in 10 minutes.

Jotaro, though angry, restrains himself as he caters to Steely Dan's whims to prevent him from hurting his grandfather. Meanwhile, Joseph, Kakyoin, and Polnareff seek out a television so Joseph can use Hermit Purple to make an image of the inside of his brain, allowing Kakyoin and Polnareff to shrink down their Stands to enter his body and locate the Lovers in order to save his life.

“
Thanks to Daisuke Kishio's astounding performance, Steely Dan becomes an exemplary hate sink. He's subtly introduced with the kebab haggling scene with Joseph, which constitutes a first battle, so to speak.

The action is taking place in Karachi, Pakistan. We put a pink sky, but this time this was the base color for every scene. The strength of this episode is to allow itself this pink sky without giving any impression of disharmony.

By the way, when Komino was praised for the Episode 9 sky, this episode was already done, so it's him trying to repeat this particular success (laughs).

Regarding the plot, Dan manages to split the group only with his words, with him and Jotaro on one side, Kakyoin, Polnareff and Joseph on the other side. Until then, the group had acted separately, but never with a direction alternating between the two parties so well.
”
—Naokatsu Tsuda, Blu-Ray limited edition commentaries