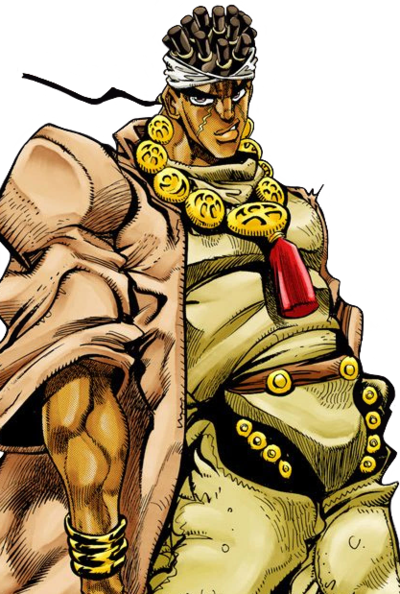 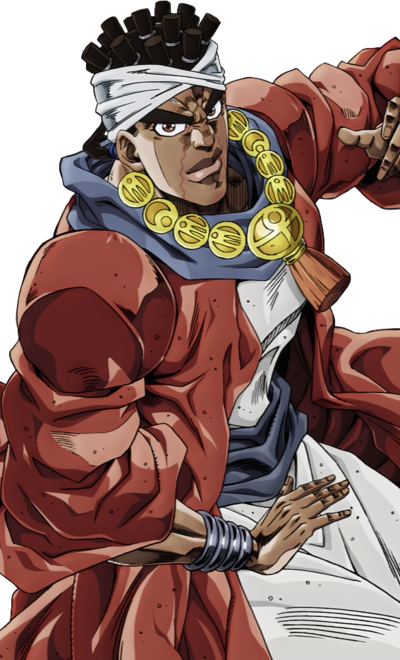 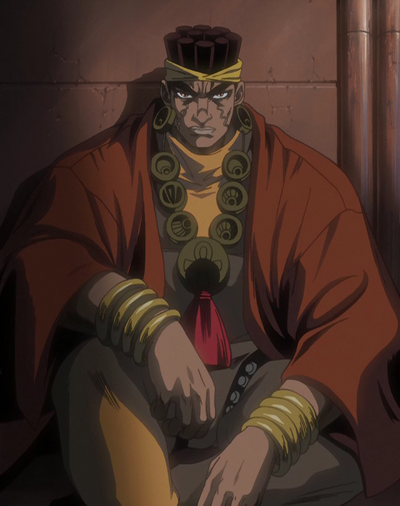 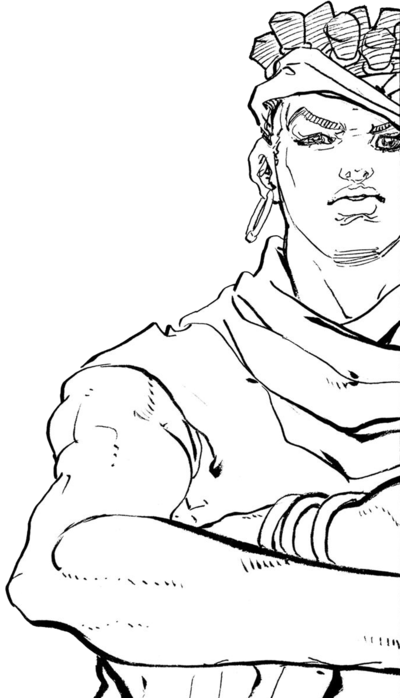 Famicom Jump II:
Saikyō no Shichinin
JoJo's Bizarre Adventure (SFC) (Playable)
The character featured in this article is commonly referred to as "Mohammed Avdol," or sometimes "Mohammed Abdul."
For a similar character, see Urmd Avdul
“
I hope you don't think the flames of Magician's Red only burn upward or with the wind. I am not bound by the laws of nature. I can control fire as I wish.
”
—Avdol to Polnareff, Chapter 125: Silver Chariot, Part 2

Introduced as an Egyptian friend of Joseph Joestar, he joins the group on their journey to defeat DIO, providing knowledge and guidance about enemy Stand Users and local cultures along the way. Avdol is a Stand User and wields the fire manipulating Stand, Magician's Red.

Avdol is also the main protagonist and narrator of the spin-off light novel Iggy the Stray Dog. 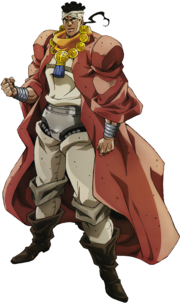 Avdol is an Egyptian man of above-average height and medium to heavy build, with thick eyebrows and a wide chin.

His main attire consists of a long overcoat or robe with wrist-length sleeves (he later switches to a robe with elbow-length sleeves) and a scarf around his neck. He has two identical scars that run down his cheeks. He wears a headband or headscarf wrapped around his forehead and keeps his hair in a style resembling Bantu knots, as well as wearing a long ponytail. He wears earrings comprised of a single, long chain of medallions, resembling a necklace. The largest of these medallions is engraved with the Egyptian ankh symbol; a large tassel hangs from this medallion, resting atop his chest. The smaller medallions are engraved with various other symbols. He wears a varying number of thick metallic bracelets on both of his wrists.

Prior to the fight with Cameo, he wears a traditional Egyptian garment known as a jellabiya under his outer robe, but from the Cameo fight onward, he wears a shirt and pants. In addition, Avdol's appearance from this point forward includes a scar in the middle of his forehead (covered by his headband) as well as a scar on his upper back (covered by his clothing).

“
You'd challenge a fortune-teller to a battle of prediction? Who do you think you are?
”
—Muhammad Avdol, Chapter 125: Silver Chariot, Part 2

Avdol generally presents himself as a serious, responsible, and overall righteous individual. Accordingly, he is very concerned with maintaining his "image" (as he repeatedly states in the fight against Mariah) as a mature and responsible person.

Avdol possesses a "strong sense of duty and loyalty".[2] He is highly dedicated to stopping DIO as one of the first two members of the party; remarkably so since he is the only one not to fight him for personal reasons. When Tower of Gray gratuitously killed unrelated bystanders, Avdol was furious.[9] Besides, Avdol is willing to die for his comrades. On two occasions he placed himself in mortal danger to save Jean Pierre Polnareff and Iggy.[10][11] During their duel, Avdol commended Polnareff's chivalry and returned the Frenchman's gestures of honor, such as explaining his Stand's power to him.[12] His loyalty is such that when Polnareff accused him to have fled DIO like a coward,[13] Avdol almost lost his cool and hit Polnareff. 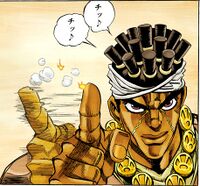 A strategic thinker and experienced Stand user, Avdol often tries to act as the voice of reason to the rest of the team, although, his self-described "emotional" temperament does not always make him suitable for this role (such as during the D'Arby the Gambler arc, when Avdol states that his strong emotions make him unsuited for playing poker). Avdol is regularly seen reflecting on the group's next move. Acting as Joseph's second in command, and being the second oldest man of the Joestar Group, Avdol is aware of the danger they are facing, and he frequently advocates caution during their journey.

In contrast to his usual highly-controlled persona, Avdol can be prone to panicking in unexpected situations, such as nearly using his flames in an airplane against Tower of Gray before Noriaki Kakyoin stops him, and exclaiming that the group needs to quickly learn SCUBA diving in the High Priestess arc, prompting Joseph to ask him to stop panicking.

However, besides his desire to present himself as a serious person, Avdol can be a jovial individual. He appreciates the tumultuous atmosphere of India for instance,[14] and when in a particularly good mood will laugh boisterously and engage in childish antics (when he behaves in this manner upon reappearing before Polnareff,[15] the latter notes that it looks like Avdol's personality made a U-turn).

Avdol knows his strengths and displays great confidence in them. The fortune-teller isn't above boasting about Magician's Red's power,[12] retorting to the enemy's own boasts, and shows a self-satisfied smile whenever he performs a successful move plus his trademark gesture mimicking a fire starter, which is done with a rotating thumbs-up while saying "Yes, I am! Tch! Tch! Tch!".

Different from the fire in nature that only goes up or follows where the wind blows, its flames obey Avdol's own will.

Avdol's Stand represents the first Tarot Card "The Magician," symbolizing the beginning of something. Polnareff notes that this is suitable, as when the world began it was surrounded by flames, implying Avdol's Stand represented the beginning of the world. Keeping up with the idea of beginnings, Avdol is shown to be the first character to act on many things: He's the first character to properly use a Stand and get into a fight, the first to encounter DIO, and the first to throw himself into danger to save someone.

Since Avdol was born with Magician's Red, he has had ample time to master its fire ability. Avdol demonstrates the versatility of his pyromancy by controlling Magician's Red's flame extremely well, being able to give them exact shapes, such as creating number-shaped flames and controlling the intensity of the fire. He also divined other unexpected properties and used his flames as a way to bind people and even created a radar from the fire.

As a professional fortune-teller, Avdol is knowledgeable about the symbolism of the tarot cards which he uses.

Moreover, he seems to know a great deal about Stands, acting as the expert during his journey, and knows about a noticeable number of the Stand users (namely Gray Fly, Devo the Cursed, and Midler) sent after him and his companions. However, his knowledge is limited, as he erroneously thought that the number of Stand users was limited by the Tarot, and didn't know about the Egypt 9 Glory Gods.

Araki designed Avdol as the "subleader" of the Joestar Party, a member who everyone could rely on. Avdol's ethnicity was chosen because Araki wanted Avdol to be a navigator of sorts with a connection to Egypt. He was put out of commission during the Emperor and Hanged Man story arc as a means of injecting "reality" into the story and keeping the readers from getting bored. However, Araki had planned for Avdol to return from the get-go, but didn't want to do it immediately and without good reason.

In hindsight, Araki feels as if he could have given Avdol more of a primary role in the story, but doubts that Avdol would have been too popular with Weekly Shonen Jump's readership at that time. He also found it difficult to draw battles involving Magician's Red. If he were to write a story based on Avdol, Araki wants it to be an origin story focused on his family, particularly his relationship with his father.[2]