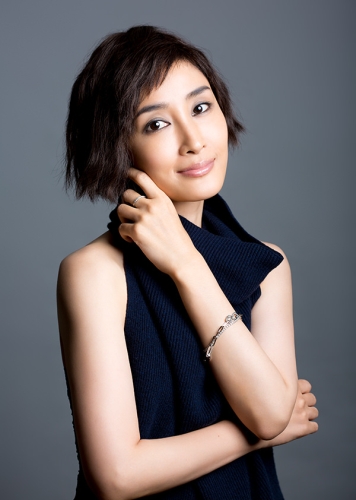 Official Website
Twitter
Karen Aoki (青木 カレン) is a Japanese jazz vocalist and singer-songwriter. As part of a duet with Daisuke Hasegawa she sings "Great Days", the third opening theme song for Diamond is Unbreakable and the seventh opening overall for JoJo's Bizarre Adventure: The Animation.

She has also written the lyrics for several English language tracks on the Diamond is Unbreakable original soundtracks (one of which she also sings) and the English language lyrics to theme songs for "FINDING THE TRUTH", "Uragirimono no Requiem", and "Heaven's falling down".

Karen Aoki spent her early childhood growing up in Hong Kong and in Detroit. In her high school and college years, Karen traveled back and forth between Thailand, London, and Japan, all the while participating in various club events. A demo tape of a band that she had formed at the time was discovered by J-WAVE radio station, and was used as an opening song to one of their programs.

Later, while working as a photographic assistant, Karen was singing a cappella to one of her own creations and a media producer who had heard it then chose to use her voice in numerous commercials. After that, as she continued her musical creations, she released two mini indie albums, finally making her major debut in 2000 with three maxi singles and a full album.

In 2003, her heart was captivated by the cool sound of jazz. She immediately looked up all the jazz clubs in Tokyo and participated in their vocalist sessions that same day. Karen gradually found herself singing in clubs all around the city, all while writing her own original jazz songs.

In 2006, her first jazz album Tokyo Jz Trippin' was released to high acclaim. The album reached #1 on many jazz charts in Japan.

In April 2007, she began hosting the TV program "Groovin' Jazz Night" by BS Asahi TV, and in August 2007, became a presenter of her own radio show "Smooth Night" (every Thursday 1-2am, Cross FM) while touring Japan and recording her next album, which was scheduled for release in June 2008.[1]

In July 2016, she created the lyrics for "You Are My Woman/Alex Reed" in the Diamond is Unbreakable ~Good Morning Morioh Cho~ Original Soundtrack while Daisuke Hasegawa performed the vocals for the song. She and Hasegawa would later duet together on "Great Days", the third and final opening theme song for JoJo's Bizarre Adventure: Diamond is Unbreakable. Aoki also wrote the lyrics and performed the vocals for "FAITH" on the Diamond is Unbreakable ~Good Night Morioh Cho~ Original Soundtrack. She also wrote the English language version lyrics for "Great Days" and would later write lyrics for "FINDING THE TRUTH" per for the Thus Spoke Kishibe Rohan OVAs and the English version of "Uragirimono no Requiem" for JoJo's Bizarre Adventure: Golden Wind.