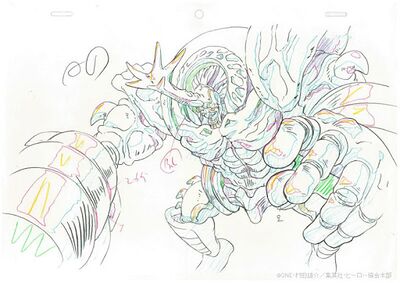 Toshiyuki Sato (佐藤 利幸, Sato Toshiyuki) is a Japanese illustrator and freelance animator credited for his work on the TV adaptation of JoJo's Bizarre Adventure by David Production. He was a key animator for various episodes throughout Stardust Crusaders, Diamond is Unbreakable, and Golden Wind.

Sato is a renown illustrator and animator, born in 1977 in the Saitama prefecture of Japan. While attending Osaka University of Arts, he became a member of the manga animation study group CAS and soon after joined Studio Dove under the name Masahiro Takayama.[1]

Sato is widely known for his illustrations for the light novel series Mamoru-kun ni Megami no Shukufuku o!. As an industry veteran animator, he is very popular among animation fans for his intense action scenes and rough linework. Series he has worked on include Fate, Space Dandy, Kill la Kill, One-Punch Man, Mob Psycho 100, and The God of High School. Sato is also notable among fans for his self-produced animation, "Super Invincible Mecha-Pipo-kun".[1][2]