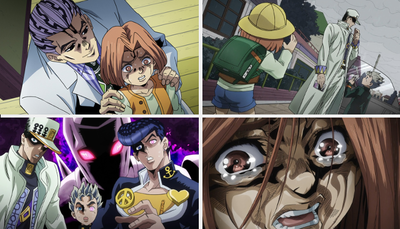 Another One Bites the Dust, Part 2 (アナザーワン バイツァ・ダスト その2, Anazāwan Baitsa Dasuto Sono 2)[1] is the thirty-sixth episode of Diamond is Unbreakable and the one hundred tenth episode of the JoJo's Bizarre Adventure anime. It covers the last half of Chapter 421 through Chapter 425.

Hayato Kawajiri has become the host of Kira's new power, Bites the Dust. As soon as anyone interrogates him about Kira, Killer Queen assassinates them and Hayato must find a way to cancel the power before all the heroes die.

Time has rewinded back to the breakfast at the Kawajiri's. While Shinobu answers the phone, Kira enjoys the realization that one of his enemies, most likely Rohan Kishibe, has died. When Kira tries to kiss Shinobu on the cheek, Hayato ruins the moment by making his teapot fall on the ground. Nonetheless, Kira is unfazed by the incident.

Hayato is determined to stop Kira and decides to go out by the window to avoid meeting Kira and directly go downtown. Aware of other citizens of Morioh having powers like that of Rohan, he tries to think of something and to avoid meeting Rohan, only to see his page peeling off like a book.

Despite being a new morning, Rohan's death is inevitable due to Bites the Dust

Kira surprises Hayato from behind and explains him that the events that occurred last time will still happen even without him being there, making any effort to avert the death moot. Rohan thus is killed by Bites the Dust's explosion and Reimi witnesses his ghost ascending to the heavens. Even though he could make Rohan's death permanent by deactivating Bites the Dust right now, Kira decides to keep it inside of Hayato in case Rohan's companions find him.

Kira takes his leave again. Disheartened, Hayato meets with Josuke group shortly afterwards; he then realizes that they are also trying to look for Kira and know he's linked to him. When Josuke presents himself and asks about Kira, Hayato attempts to kill himself to avoid being found out. However, he is stopped by Killer Queen. Before the group can react, it sets off Bites the Dust in Josuke and the others and once again returns Hayato to the start of the morning. 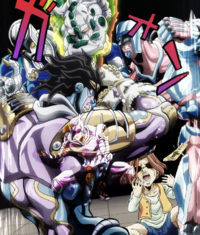 Bites the Dust in Action

Having witnessed five people being killed under his eyes, Hayato realizes how much of a monster Kira is. The boy guesses that he can only stop Kira by either killing him or forcing him to undo Bites the Dust and thus hides Stray Cat in his backpack to assassinate Kira. Going down the stairs, Hayato remembers that Kira has been smugly putting his hat on him every time and chooses this instant as his window of opportunity. Just as fate predicts, a teacup breaks but only while Kira has holding it. Moreover, Hayato kisses his mother's cheek in Kira's place. Waiting at a corner of the street, Hayato nervously waits for Kira to come to him.

Kira eventually appears but he has grown suspicious about Hayato's knowing looks and stubbornly keeps his distance as the moment of Rohan's death approaches. For his part, Kira's instincts tell him to observe Hayato further. However, the boy's desperate looks as he knows that Rohan is seconds away from dying trick Kira into thinking all is well and the man finally approaches Hayato. Hayato unveils Stray Cat who shoots straight at Kira's chest. However, he then gets back up to Hayato's horror and proceeds to explain how the events of the morning have led him to put his wristwatch at the right place for the right time. Kira is at his peak just as the clock hits 8:30AM, the time of Rohan's death.

“
This is the first time in the JoJo series that Toshiyuki Kato and I worked on the storyboard together, splitting the episode into two halves.

Mr. Kato was absolutely determined to draw Hayato under pressure, particularly when the latter was planning to kill Kosaku Kawajiri, so I took the first half of the episode and left him the second. That said, it was still difficult. I'm hoping Hayato's emotions translated well enough on-screen; I would have liked more time in the episode to show his state of mind more.

Bites the Dust is a terrifying power, and at the same time a power that’s hard to understand. (bitter laughs) Truth be told, I don’t even know how many times time was looped for Hayato. So, we avoided the subject in the anime.
”
—Naokatsu Tsuda, Blu-Ray limited edition commentaries