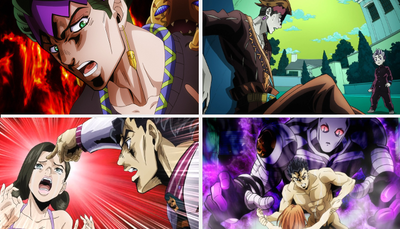 July 15th (Thursday), Part 4 (7月15日(木) その4, Shigatsu Jū-go-nichi (Moku) Sono 4)[1] is the thirty-fourth episode of Diamond is Unbreakable and the one hundred eighth episode of the JoJo's Bizarre Adventure anime. It covers Chapter 410 through Chapter 411 and Chapter 415 through the beginning of Chapter 418.

Cheap Trick has latched on to Rohan Kishibe's back. The seemingly inoffensive Stand proves to be impossible to get rid of and Rohan soon learn to hide his back as he crosses Morioh to join with his allies.

Rohan attempts to hide Cheap Trick while it insults passersby

Having become the unwilling user of Cheap Trick, Rohan is trapped in a situation where he can only get rid of the pestering Stand by showing his back to someone else, at the cost of his own life. With no other options (and knowing that Josuke and Okuyasu would never help him), Rohan is forced to contact Koichi for aid. However, he is unable to convince Koichi that Cheap Trick exists, as the fact that the Stand is only visible to its user, combined with Rohan's inability to show his back outright and the fact that Masazo's corpse shriveled into a doll in the time that passed, leaves him without any evidence. Koichi leaves, thinking that Rohan is just playing a trick on him, forcing Rohan to find Jotaro at the Morioh Grand Hotel for help, all the while having to endure his unwelcome new Stand's constant pestering to burn the photographs of Morioh's residents.

Cheap Trick turns around in Reimi's alley, causing the Ghost Hands to take it

Throughout his trip to the hotel, Rohan is continuously forced to use absurd means to hide his back, such as sticking his back to a random pedestrian's while crossing an intersection, using Heaven's Door to keep the man from turning around in response to Cheap Trick's insults, as the latter is capable of speaking to Stand users and non-Stand users alike. Eventually, Rohan comes across a cat and a dog staring at him, followed by large hordes of both. Cheap Trick reveals that he is able to talk to animals as well, and sends the dogs and cats to attack them, placing Rohan in checkmate. However, the animals are suddenly frozen and driven off by Echoes Act 3; Koichi states that he saw Rohan continuing to hide his back even after the two's earlier meeting, indicating that Rohan's claims of an enemy Stand on his back were true. Koichi tries to use Act 3 Freeze to pry off Cheap Trick, but is forced to abort this when he learns the hard way that Cheap Trick will kill his host if removed, regardless of the circumstances. A hysterical Rohan then surrenders, turning his back to Koichi and letting Cheap Trick take his next victim. However, Rohan reveals that everything has gone according to plan: he took Cheap Trick into Reimi's alley and forced him to turn around by showing him to Koichi. Because Cheap Trick turned around, he is taken away into the afterlife, with Rohan sealing the deal by using Heaven's Door to ensure that Cheap Trick is sent to Hell. Afterwards, Reimi is shown the pictures Rohan took, pointing out that the two pictures with an aloof salaryman seem suspicious.

Meanwhile, Kira continues to struggle to maintain his disguise as Kosaku Kawajiri, with his murderous urges growing more and more. While on the train back home, he is pestered by a couple after he accidentally irritates them, and gets mocked by them for his bowling pin nail clipper. In retaliation, Kira gives in to his urges and follows the couple home, calmly destroying the man with Killer Queen and forcing the woman to clip his nails, which had gone untreated since he first forced Aya to give him Kosaku's face. Kira torments the woman, pinning her boyfriend's earrings, his ears still attached, to her before using Killer Queen to completely obliterate her, save for her hand. However, Kira's moment of calm joy is interrupted when he realizes that he was being covertly filmed by Hayato. Not wanting to be exposed, Kira destroys the woman's hand before following his "son" back home. Hayato realizes that the man pretending to be his dad is no ordinary man, and that the footage he took probably won't be taken as credible by anyone. Hayato decides to recuperate in the bath, only to be joined by Kira. After a very tense time together, Kira and Hayato turn on each other when Kira confirms that Hayato was taping him. Kira attempts to kill Hayato and make it look like an accident, only for Hayato to point out that all of this is being filmed as well. Trapped between a rock and a hard place, both Kira and Hayato's tensions come to a boiling point.

“
We originally thought about switching the voice actors for Masazo Kinoto, voiced by Makoto Ishii, and Toyohiro Kanedaichi, voiced by Koichi Tochika. There was alot of discussion about it and we even took the directing into account, but in the end, we made the right choice. Kanedaichi sounds rather classy and Kinoto is very bright, but also a little screwed in the head. Their respective voice actors perfectly nailed their characters.

Speaking of Kinoto, we briefly see him in episode 14 in front of the bookstore and before he’s developed his phobia about showing his back. Some of you may have noticed him.

In regards to the scene where Rohan is surrounded by the cats and dogs, the post-production team did a great job creating an oppressive atmosphere. It'll depend from episode to episode, but they say that, compared to other anime, JoJo is among those that require the most post-production. I sincerely apologize about it and I want to thank the team for their magnificent work on how Satoru and Minako explode, thanks to Kosaku Kawajiri.

Starting with this episode, Hayato becomes a "main character" and is already showing some level of courage. That said, the "father and son" bathroom scene was a little bizarre. (laughs)
”
—Naokatsu Tsuda, Blu-Ray limited edition commentaries