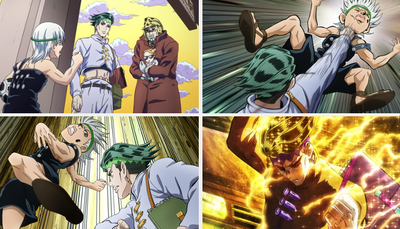 Rock-Paper-Scissors Kid Is Coming! (ジャンケン小僧がやって来る！, Janken Kozō ga Yatte Kuru!)[1] is the twenty-sixth episode of Diamond is Unbreakable and the one hundredth episode of the JoJo's Bizarre Adventure anime. It covers Chapter 371 through Chapter 376 of the manga.

Yoshihiro Kira decides to create as many Stand Users as possible and the first of them is Ken Oyanagi, a boy who decides to challenge Rohan to a game of rock-paper-scissors.

Yoshihiro flies around Morioh in his photograph, searching for people to turn into Stand Users with his arrow to kill the Joestar Group. Along the way, the arrow chooses a young boy, who Yoshihiro then fires at.

At the train station, Rohan is watching over the commuters to seek out Kira. He is confronted by the boy from earlier, now with a hole in his cheek, who asks Rohan to play rock-paper-scissors with him. Rohan uses Heaven's Door to read the boy's memories, learning that his name is Ken Oyanagi and that he tends to play "scissors" first. From this, Rohan cheats his way to victory, playing "rock" before leaving victorious. Ken then stalks Rohan, forcing him to play until Rohan loses by using rock to punch Ken against his paper. Just then, the hole in Ken's cheek sucks in part of Heaven's Door. Boy II Man, having absorbed part of Rohan's power, renders Ken immune to Heaven's Door. Rohan is now forced to continue playing rock-paper-scissors with Ken in order to make Heaven's Door whole once more.

The stakes are high for Rohan Kishibe

Rohan loses his fourth match and loses the lower body of Heaven's Door, having been psyched by Ken. Ecstatic, Ken gloats about surpassing Rohan and proves his own good luck by predicting correctly that Josuke and Joseph, who are passing by, will ignore Rohan and then avoids a shower of broken glass without moving. However, Rohan's spirit doesn't break and he psyches Ken out by announcing his next hand. Numerous draws raise the tension; eventually, Ken plays "scissors" against Rohan's "paper", only for his hand to suddenly curl up into the fist that indicates "rock". After Ken gives back Heaven's Door, Rohan explains that he used Shizuka Joestar to stealthily close his hand. Frustrated that Rohan cheated, Ken tries to best Rohan in a rematch by holding Shizuka hostage, only to lose three times in a row. In a fit of despair, Ken attempts suicide by jumping in front of a moving truck, only for Rohan to move in the way, surviving through sheer luck when Yoshihiro, who had been watching the match, is blown by the wind onto the truck's windshield, obscuring the driver's view; the truck then swerves out of Ken and Rohan's way, saving them both.

Seeing that Rohan really does have luck on his side, Ken admits defeat and is in turn praised by Rohan for his decisiveness. Joseph and Josuke meet up with Rohan again, looking for Shizuka. Not knowing where she was left, Rohan and Ken then start searching for her with them, a hectic end to a hectic day.

“
The colors we chose for the duel between Rohan and Rock-Paper-Scissors Kid were inspired by another series. I’ll let you take a closer look, mainly at the auras around them. (laughs).

The boy here, Ken Oyanagi, was brilliantly portrayed by Chika Sakamoto. I particularly like his insolent tone, as well as Rohan, who can be merciless even against a child. This already happened a few times before, but this episode allowed the voice actors to surpass themselves. During the recording, Ms. Sakamoto and Mr. Takahiro Sakurai, Rohan’s voice actor, both gave off a lot of energy, I remember it very distinctly.

According to Mr. Araki himself, Ken’s Stand design is inspired by Tetsujin 28. However, I hesitated to faithfully recreate the colors, so instead of Tetsujin’s blue, I opted for a more metallic coloring.

Just like in the manga, the Janken duel happens in five rounds, but during a meeting, we thought about shortening it to three. In the end, we managed to keep all five rounds in the allotted screen time.
”
—Naokatsu Tsuda, Blu-Ray limited edition commentaries