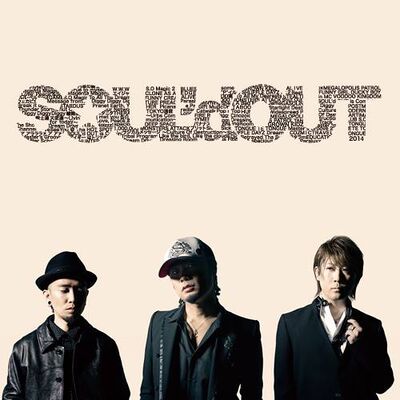 SOUL'd OUT was a Japanese hip-hop and R&B group who were active from 1999 to 2014. The trio consisted of three members, the Main MC Diggy-MO', the Human Beatbox and MC Bro.Hi, and the Trackmaster Shinnosuke. The group recorded "VOODOO KINGDOM", the theme song to the JoJo's Bizarre Adventure: Phantom Blood animated movie. Additionally, two of the group's songs are used as the namesakes for characters featured in Steel Ball Run: Magent Magent and Wekapipo.

In 2014, the group announced on Facebook that they would be parting ways, with Shinnosuke's desire to leave the group for personal reasons as one of the main reasons behind their breakup.[1]

Diggy-MO', the lead MC for SOUL'd OUT, acquired a foundation of music through several years of classic piano training. In middle school he formed a band which was heavily influenced by the hip-hop group The Roots. Diggy-MO' attended a university of fine arts to major in graphics, but he continued to dabble in music. In SOUL'd OUT, he, along with Bro.Hi, writes the lyrics for the music, and he composes and arranges a good number of works for the band. He is classified as a rapper, but he often sings in his songs, especially his solo works, which are not as heavily hip-hop and urban based as SOUL'd OUT's works are.

Bro.Hi is the beat box/MC for SOUL'd OUT. During middle school, he formed a band and manned the drums. While seeing The Roots, Bro.Hi experienced his first exposure to the method of the human beat boxing. Afterwards, he began to polish the skills in human beat boxing. With Soul'd Out, Bro.Hi helps to write the lyrics and performs backup MC. Artists who influenced Bro.Hi are The Roots, RZA, Busta Rhymes, Snoop Dogg, Nas, Naughty By Nature, Lauryn Hill, TLC, Aaliyah, Zhane, The Who, The Doors, Janis Joplin, The Jam, Inoue positive water, DJ Krush and Utada Hikaru.

Bro.Hi also formed his own rock group with a fellow DJ and rapper by the name of Kay named EdgePlayer. Their debut mini-album IN HUMANITY was released on July 22, 2009, followed by the single "Nagarete" (流れて) on September 2, 2009, and 2nd album TWISTED on July 28, 2010. As of 2014, Bro.Hi is the only remaining member of the band, now renamed to E.P.O.

Shinnosuke is the DJ for Soul'd Out. He studied oil painting and design in high school. While in elementary school, Shinnosuke began playing the trombone, forming a brass band, and also played the keyboard. After graduating high school, he started making his own original music which came from observing Jam & Lewis. Later, he looked towards DJing music. Along with Diggy-Mo, Shinnosuke composes Soul'd Out's music and helps in the arrangement process as record producer. Shinnosuke cites P-Diddy, the TrackMasters, Timbaland, The Neptunes, Jimmy Jam & Terry Lewis, Teddy Riley, Bernard Edwards, & Nile Rodgers, Babyface, TJ.Kura, Rodney Jerkins, Tim & Bob, and Prince, as his influences.

SOUL'd OUT and Hirohiko Araki in MTV interview. (2007)

The band's members were big fans of JoJo's Bizarre Adventure,[2] with Shinnosuke in particular citing Hirohiko Araki as an artistic influence. Their love of the series shows up in their music videos and lyrics, with the song "Magenta Magenta" even referencing Aja. For the band's 12th single "Catwalk", Araki drew the cover artwork, portraying the three band members as women with heads resembling Killer Queen's. 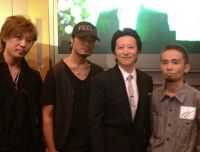 Araki and SOUL'd OUT at the Hirohiko Araki JoJo Exhibition (2012)

The following year, the song "VOODOO KINGDOM" off of SOUL'd OUT's 14th single was chosen to be the theme song for the JoJo's Bizarre Adventure: Phantom Blood film.

Two of SOUL'd OUT's song titles were referenced for characters in Steel Ball Run: "Magenta Magenta" was used as inspiration for the name of Magent Magent and "Wekapipo" (ウェカピポ) inspired the name of Wekapipo.[3] 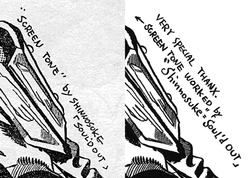