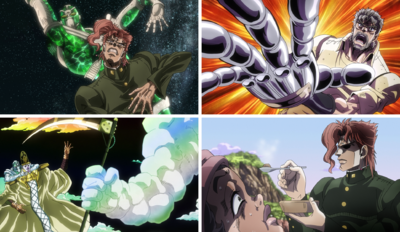 Death Thirteen, Part 2 ( その2, Desu Sātīn Sono 2)[1] is the twentieth episode of Stardust Crusaders and the forty-sixth episode of the JoJo's Bizarre Adventure anime. It covers Chapter 171 through a few pages of Chapter 174 of the manga.

The Joestar Group have crashed in the desert because of Kakyoin. Kakyoin suspects the baby Mannish Boy to be the enemy and master of Death Thirteen, but his companions believe he's going mad. Thus, he must find a way to defeat Mannish Boy on his own.

The baby Stand user, Mannish Boy, grins as the group is unsuspecting

Death Thirteen's ambush continues. The group has crashed into the desert and must camp for the night. Kakyoin has become suspicious of the baby that's accompanying them but his erratic actions make the others suspect that he hasn't had all his head. While Joseph prepares a dinner for the baby, Kakyoin sees the baby kill a scorpion that had crept into his basket and begins to openly accuse him of being the enemy. However, the baby manages to hide the evidence so that the others do not believe him. After failing to convince everyone with the message on his arm, Kakyoin attempts to attack Mannish Boy, but he is knocked out by Polnareff, who believes he has gone insane. Everyone is now asleep and ready to be killed in their sleep. 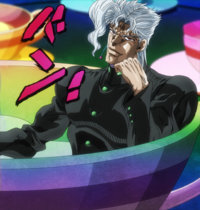 Jotaro, Joseph, and Polnareff end up in the dream amusement park, which Polnareff remembers, and where they are all subjected to the whims of Death Thirteen. Even Jotaro cannot call for Star Platinum and Death Thirteen takes pleasure in having a fake pummel Jotaro.

Fortunately for them, Kakyoin, who had summoned Hierophant Green before he was knocked out, is able to bring him into the dream world to fight against Death Thirteen. Mannish Boy attempts to use the dream world to his advantage and slice Hierophant Green in half, but Kakyoin manages to instead send his Stand into Death Thirteen's ear, forcing Mannish Boy to heal his wounds and accept defeat. The next morning, as everyone else forgets what happened in the dream, Kakyoin decides to spare Mannish Boy and leave him in a nearby town, making sure that he does not dare try anything again by mixing the child's feces into his food that Joseph later feeds him. As the group crosses the Red Sea, Joseph makes a detour towards an island to meet someone important.

“
Here is the next part of the fight against Death 13. In the dream world, Polnareff's haircut is abused again, it seems it will be customary (laughs). At the same time, Joseph's artificial hand and Jotaro's chain get the same treatment. To each their iconic items!

Death 13 is still terrifying with its nightmarish grim reaper looks.

For the fight resolution scene, we decided to make the sky black. And even then the theme park is bathed in a particular light with no real sunlight. That is why we chose this green sky, with a lot of hesitation.

This episode also features a white-haired Kakyoin, you couldn't have missed that. Yuko Sato, the color coordinator, really wanted to include this effect. And I must say that this color schemes makes a good contrast with the black sky of the theme park.

Then comes the scene where Kaykoin finally punishes Mannish Boy. I am deeply sorry for those who were eating at this moment...
”
—Naokatsu Tsuda, Blu-Ray limited edition commentaries