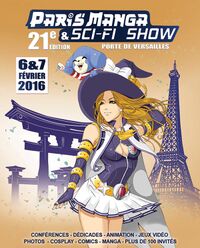 In February, Paris Manga had the honor of hosting Masahiko Komino, a veteran of the industry who's highly acclaimed for his various roles on the animated adaptations of JoJo's Bizarre Adventure, including lead Character Designer of Stardust Crusaders. We took advantage of his visit to Paris to meet with him for a fully dedicated JoJo interview!

Mashiko Komino, thank you very much for accepting this meeting! Can you tell us what brought you to work in animation?

Masahiko Komino: I've been interested in animation since I was very young, but it was only after a brief period abroad that I decided to join a school that specialized in animation.

Are there any artists or works that have influenced your choice of career?

In terms of manga, Ushio & Tora was a series that impacted me deeply, but anime-wise, Sailor Moon was the true turning point in my attraction to this medium. Particularly the first season and its animation, I think the staff managed to find a good balance between the different aspects of the work. It's thanks to Sailor Moon that I discovered that we could convey a lot of emotion through an anime.

Stardust Crusaders is the first anime where you hold the position of Character Designer. How did you go about approaching this first time endeavor?

To be honest, it really wasn't my first time. In fact, I was already given a shot at character design in the past without ever being credited, though Stardust Crusaders is the first series where my name is properly listed in the credits. My past experiences have given me a certain bias of the medium as I've been a long time fan of 80's-90's Shonen such as Dragon Ball, Hokuto no Ken and, of course, Jojo. The problem was that they had previously offered me the character designer role for other series, but I ended up declining them out of lack of interest. However, when I was asked to design the Stardust Crusaders characters, you can imagine how thrilled I was since it brought me back to the type of shonen I love.

Although you were already on the staff of Jojo's first animated series, you were not the character designer. Why this change of position between the first anime and Stardust Crusaders?

In the original manga, Hirohiko Araki has a trait of constantly evolving with the times. Out of respect to his series, we felt that it was also necessary to signify these changes in the anime. That's why with each new animated season of Jojo, the character designer is switched out. (Spoiler for Battle Tendency) Regarding the reason that I was chosen for Stardust Crusader's design, the team had admitted to being fairly impressed with how I adapted Part 2, particularly the episode where Caesar died. From there, they wanted to see me push that experience forward.

Hirohiko Araki is one of those authors whose art is very personal and immediately identifiable. How did you handle recapturing it? What was most difficult?

Yes, its true that he has a very special design; Araki is one of those designers who really have their own style. But you know, I've read the manga since I was a kid, so I've constantly absorbed it throughout the years to a point where I find no real difficulty recapturing it. What has actually been difficult is the process. When you draw a manga, you are only responsible for yourself, whereas when you're character designer, you are responsible for a team of a dozen or even hundreds of people who are all waiting to see what they'll work on. The issue is finding a good balance between ease of animation (where the rest of the staff can work without difficulty) and keeping true to the characters. That is what is most difficult.

Which characters were harder to work with? Who was easiest? And who are your favorite characters?

The person I had the most problems with is Daniel J. D'Arby (D'Arby the Gambler). This is a man who is not really old or young, and finding the right balance to emphasize that age and animate it without distorting Araki's original design was very complicated. The easiest character was Jean-Pierre Polnareff because he was very simple to work with, even for action scenes. As for my favorite characters, the one who I prefer to draw is Jotaro, while my favorite short character was Anne as she was the one I related to most.

How was working with Hirohiko Araki?

I have never actually met Mr. Araki. Generally, I would send him my work every Thursday and then he'd make suggestions on modifications, though everything was usually accepted very quickly. I felt alot of confidence from him.

What would you say to a person who would be reluctant to watch Jojo?

JoJo's Bizarre Adventure: Diamond is Unbreakable is arriving this spring. Will you be a part of the staff?

For now, I still have things to wrap up with Stardust Crusaders. I have contacts for participating in Diamond is Unbreakable and I'd love to participate, but before that I'd like to finish what I have to do.

Character Designer, is it an experience that you'd like to repeat?

It's actually not one of the positions I prefer, because I like above all to live the characters, animate them and make them speak. The character design is obviously important, but I prefer positions where I can work on the animation.

Thanks to Mr. Masahiko Komino, his interpreter and manager Emmanuel Bochew, and Paris Manga for the reception.[1]