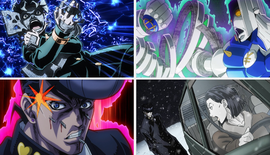 Let's Go to the Manga Artist's House, Part 2 (漫画家のうちへ遊びに行こう その2, Mangaka no Uchi e Asobi ni Ikō Sono 2) is the fifteenth episode of Diamond is Unbreakable and the eighty-ninth episode of the JoJo's Bizarre Adventure anime. It covers part of Chapter 321 through Chapter 324 of the manga.