Meet the Gangster Behind the Wall 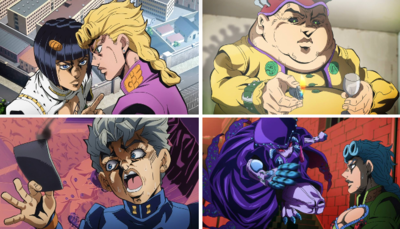 "Meet the Mafioso Behind the Wall"

Meet the Gangster Behind the Wall (塀の中のギャングに会え, Hei no Naka no Gyangu ni Ae)[1] is the third episode of Golden Wind and the one hundred sixteenth episode overall of the JoJo's Bizarre Adventure anime. It covers from Chapter 448 to the majority of Chapter 451 (excluding the last three pages) of the manga.

Giorno and Bucciarati become allies thanks to their mutual disdain for the drug trade. Bucciarati thus accepts to support Giorno's effort to infiltrate his gang Passione. However, he must has to meet the capo Polpo and pass his test.

Bruno Bucciarati is stunned by Giorno Giovanna's bold declaration to join the gang, and get rid of the drugs plaguing Naples. Demonstrating his good heart when nearby children hit him with a football and giving it back to them, Bucciarati decides to wager on Giorno's golden dream and resolve, giving him a chance at changing things. Bucciarati will tell his gang that he hasn't found the culprit and will enable Giorno's infiltration. However, he warns that in the event that Giorno is found out as a traitor, he will be unable to help him at all.

Walking through the busy streets and dark alleyways of Neapolis, Bucciarati describes to his new ally how his gang, Passione, works. Passione oversees everything in the city, and their Boss is very secretive, as no one knows his real name or even his face, orders coming through lieutenants. Bucciarati tells Giorno that one of such lieutenants, Polpo, awaits him inside a prison to interview him. After going through a body check surrounded by heavily armed guards and being told that no traffic is allowed between them, Giorno finds himself inside in a dark corridor. When the lights flip on, Giorno sees a small empty cell; however, the "bed" stands up, revealing itself as Polpo, a humongous obese man. Polpo chitchats a bit with Giorno, revealing the many luxuries hidden inside the walls of the cell, and proposes him some wine, which Giorno refuses as the rules of the prison dictate. Polpo uses his mysteriously obtained belongings as proof to a claim that what people say and what they do are different things, then carries on to the interview.

Polpo hands over the test

When Polpo asks Giorno what he is capable of, Giorno chooses to hide his Stand and expose his pickpocketing abilities and his ear trick. Nonetheless Polpo replies that in their line of work, being trustworthy is more important than any talent. As a result, Polpo gives Giorno a lit lighter and tasks him to keep it alight for 24 hours, to test whether he can be trusted even when no one's looking. Warily taking the lighter, Giorno must now pass another body check and hides the lighter in his fist. This catches him by surprise, as he had thought that the guards were actually bribed by Polpo to allow him to pass. When the guard asks to see whatever Giorno is carrying, he turns the lighter into a flower, keeping a flame hidden inside the petals, and manage to go through the prison security checks.

Giorno heads to his current home, a small student dorm in a middle-high school. Setting up his lighter to keep it stable and protect it from the wind, Giorno suddenly hears his door opening. Spotting Koichi Hirose who's managed to find him, Giorno must hide outside of the window, unable to intervene as Koichi searches the room for his passport and risks putting out the flame should he find it. Cornered, Giorno attempts to transform a lamp into a snake biting into the bread holding the lighter, but the snake accidentally burns itself. Koichi spots the lighter but is fortunately distracted by his found passport, allowing Giorno to snatch the lighter unnoticed.

Now walking away with his lighter in hand, Giorno again orates about his dream, but in his distraction, doesn't notice a splash of water a janitor was throwing around to clean up the school courtyard. The lighter is extinguished, suddenly rendering Giorno's efforts moot. In his despair, Giorno lets the friendly janitor attempt to relight the lighter, which he does effortlessly, and gives back to the young man. Stunned, Giorno doesn't understand why the lighter could be so easily switched back on, and begins to ponder the point of the test. He suddenly sees a Stand walking by and disappear behind a column. It suddenly reappears from the shadows and announces to the janitor that he's relit the lighter and is given a "chance" to prove himself. Before Giorno can intervene, it grabs the soul of the janitor, pulls an Arrow out of his mouth, and impales him, killing the old man instantly as he lacks the potential to be a Stand User. The janitor falls dead from the staircase into Giorno's arms, and the enemy Stand spots Giorno. Announcing to Giorno that he witnessed to lighter's relighting, the Stand lunges at him in an attack.