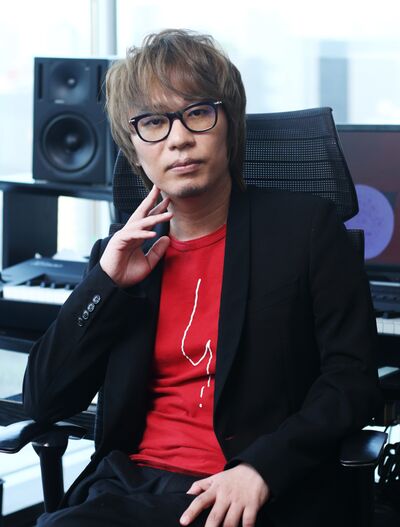 Yugo Kanno (菅野 祐悟, Kan'no Yūgo) is a Japanese composer and musician known for his work on various anime, TV series, and movies. He has composed the soundtracks for JoJo's Bizarre Adventure: The Animation, from Stardust Crusaders to Stone Ocean.

Kanno was offered the position of JoJo's composer by the series sound director, Yoshikazu Iwanami, during their time working together on Psycho-Pass.[1] Other animated series he has composed for include Birdy the Mighty, Gundam Reconguista in G, and Ajin: Demi-Human.

Kanno was born in Saitama, Japan in 1977. Due to his father being a music enthusiast, he grew up listening to jazz and classical music from his childhood. He began to learn piano at the age of four and became passionate about soccer and piano at elementary school. He attended middle school in Kawagoe and spent a memorable childhood period such as taking charge of percussion instruments in a brass band. After entering high school, he started to teach composing lessons before later moving to Takanezawa for university.[2]

In 1997, he entered the Tokyo Department of Music Composition. After graduating from the Tokyo College of Music, department of composition, film scoring course, he started offering music to artists.[3]

In 2004, he made his debut at the age of 27 in a Fuji TV drama called Last Christmas. After that, he became active in a wide range of music production including movies, TV dramas, animation, and documentaries.[2]

On December 14, 2007 he held his first orchestral concert which has since become an annual event.[4] In 2012, he began work as a painter after casually painting a portrait of a friend who came by while he was in the studio.