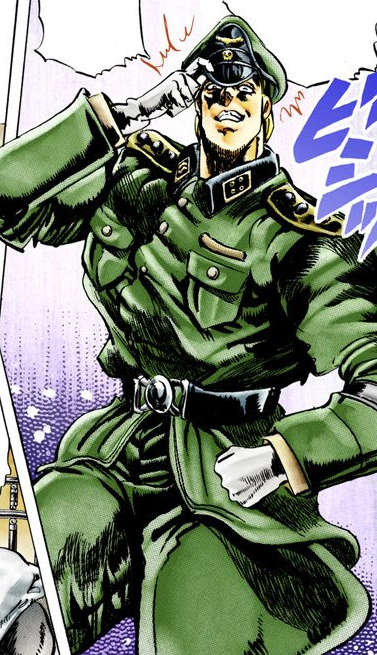 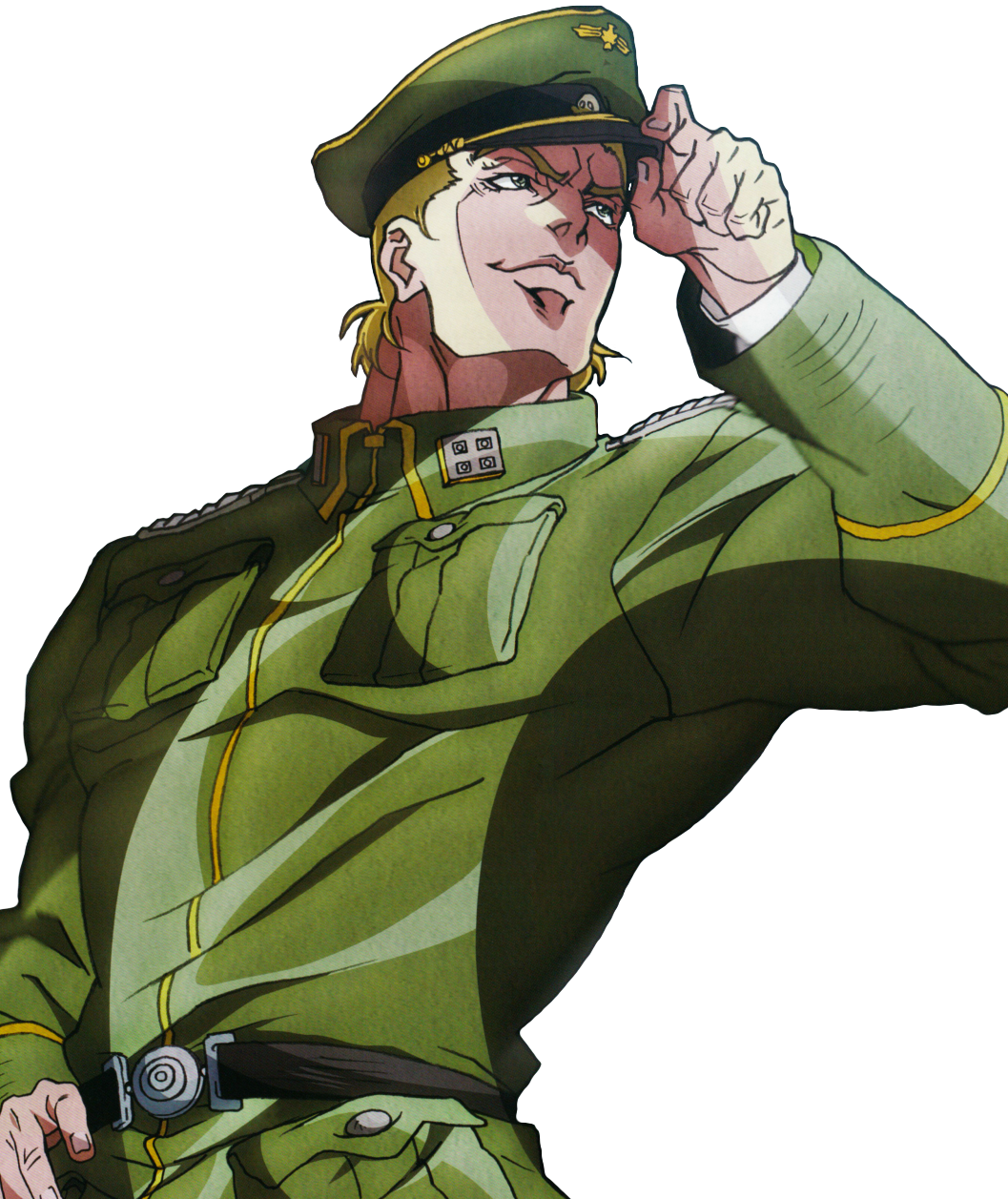 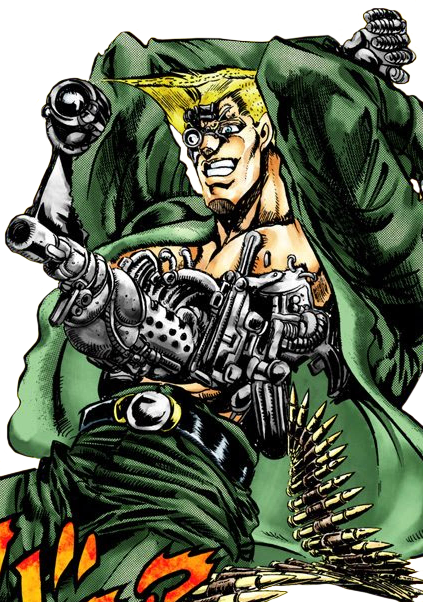 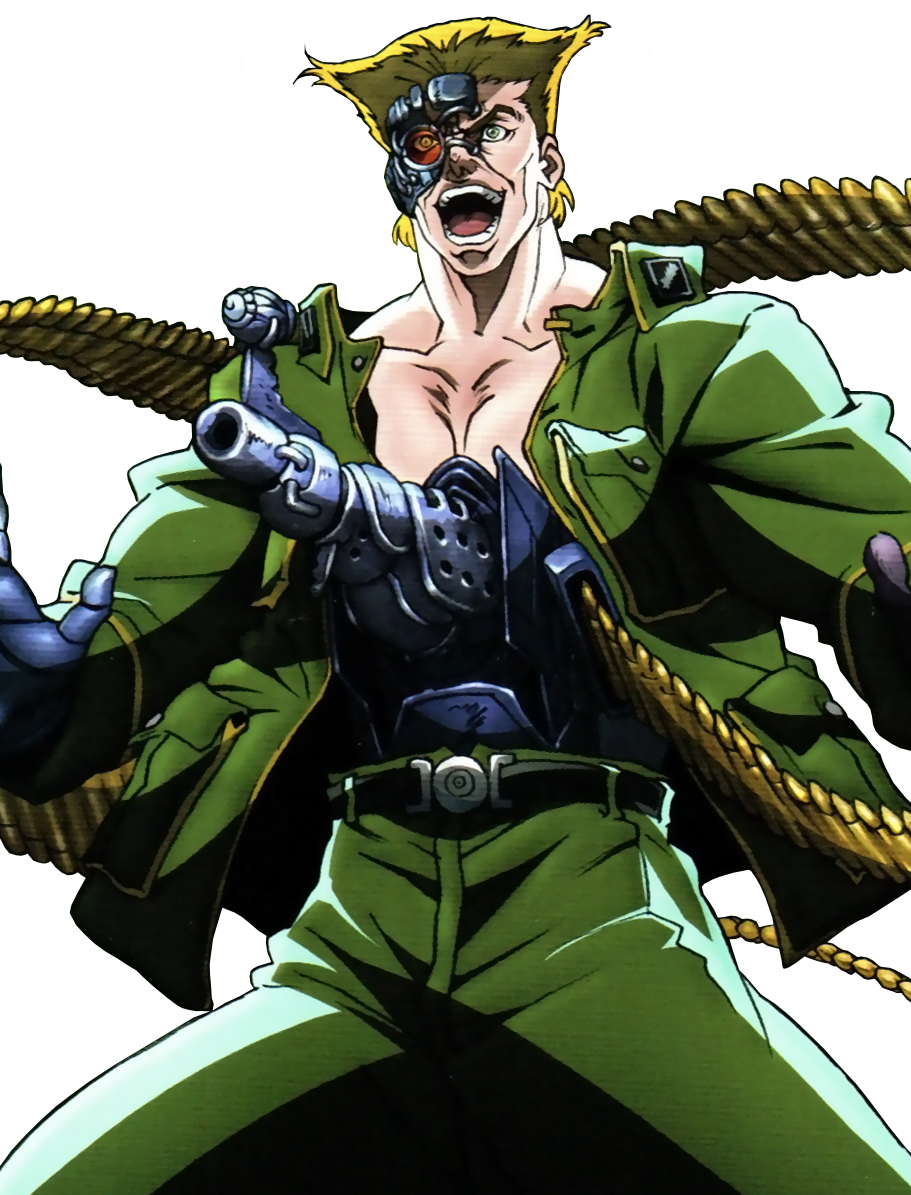 Gunned down by Soviet

For a similar character, see Fritz von Stroheim
“
German science is the greatest in the world!!!
”
—Stroheim about his cyborg body, Chapter 86: Light Mode Kars, Part 1

Stroheim is introduced as a Nazi officer researching and experimenting on the Pillar Man Santana. Eventually, he and his unit cooperate with the Ripple users to stop the threat of the Pillar Men.

Stroheim is a tall, well-built man of masculine facial features (comparable to those of the contemporary Dolph Lundgren

Blue-eyed; at his introduction his blonde hair involves a short flat-top and a length at his neck; soon developing into tall, splaying cut. Later, he acquires complex metallic cybernetic prosthetics, including the section of his face surrounding his right eye; which is additionally covered by a sort of monocle

He wears a range of official Nazi military attire

. His cyborg prosthetics include his entire abdomen, which houses a powerful machine gun.

“
I may not seem it but I'm a proud German soldier. I was already prepared for this when I accepted this mission! I'm different from you cowardly British wimps. I'd easily give up 2 or 3 limbs for my country!
”
—Rudol von Stroheim, Chapter 60: The Pillar Man, Santana, Part 7

When Stroheim is first introduced, he is a callous and cruel Nazi

. During his mission in Mexico, Stroheim commits several heinous misdeeds such as capturing locals and forcibly turn them into guinea pigs for his vampire experiments (including women and children),[3] or threatening to cut a maid's tongue for slightly cutting him during a shave.[4]

However, upon being threatened with Santana's rampage, he also demonstrates bravery and does not hesitate when trapped in asking Joseph to cut off his leg; or blow himself up with a grenade to kill the invading Santana.[5] This is seen once again when Stroheim gives him a helping hand in defeating Kars and helping Joseph drive him into the volcano with an airplane. Stroheim maintained his bravery up until the Battle of Stalingrad, 1943, where he is said to have fought bravely and died.[6]

Likewise, Stroheim respects courage from others, no matter what ethnicity the individual may belong to. His appreciation for valor is seen when he spares one Mexican boy for being willing to sacrifice himself for his cellmates; on the other hand he executed the rest of the prisoners for not having the same spirit, making the boy's sacrifice moot.[7]

Stroheim is an enthusiastic nationalist. He is particularly proud of his cyborg body; praising "German science" and generally loudly boasting the Germans given the occasion.[8] His pride occasionally grows into overconfidence and arrogance. Because of it, Stroheim tends to both overestimate himself or his technology and underestimate how formidable the Pillar Men are. Thus, three times during the story, a Pillar Man gets the better of him; first Santana easily escapes his cell and attacks him,[9] then his cyborg body is also defeated by Kars[10] and finally Stroheim rushing to finish Kars in the battle of the Piz Bernina Ruins allows the Pillar Man to return the UV light against the humans and turn into the Ultimate Lifeform.[11] On a regular basis, Stroheim also loudly laughs at his foes and point his finger at them when they are in a position of weakness.

in the Nazi Party, Stroheim is capable of leading his own battalion, as well as any members of the party of lower rank. To this end, Stroheim enforces his rank with a strong sense of pride and most of time, his word is law. As a capable leader, Stroheim often initiates attacks upon command, though the logic behind them usually varies depending on the level of abnormality of the enemy. When cornered, Stroheim's eminent pride in his country will cause him to unquestionably sacrifice himself to take out his target. In terms of combat expertise, it is presumed he is capable of performing the most basic of military skills with ease, including assembling and disassembling military weapons, and making efficient use of said weapons. Stroheim also flaunts a very able-bodied physique and has demonstrated a very high jumping ability.

As a cyborg, Stroheim can casually crush a golf ball

After being resurrected as a Cyborg, Stroheim's physical capabilities increased and with it his rank to Colonel

status. As a Cyborg, his strength increases significantly, having been designed with the ability to crush an object with his hand at a pressure of 1,950 kg/cm2 (roughly double Santana's.) In this form, Stroheim had also gained partial immortality, being able to survive most attacks, as his mechanical limbs being damaged lessens the effect on his lifeforce. With these limbs, he is capable of bending his body unnaturally, and deflect enemy attacks due to being made of metal. Situated on one side of Stroheim's face is a magnifying device that allows Stroheim to zoom in on objects up to a point where he can study their internal structure.

Stroheim takes an injured Robert E. O. Speedwagon to the Nazi base in Mexico and interrogates him for information regarding the Pillar Men. He reveals that the Nazis had acquired one of them, which he named "Santana" after the warm winds of Mexico.

Stroheim eventually sacrifices himself in an attempt to stop Santana's rampage and is assumed to have died until he reappears at the border of Switzerland to retrieve the Red Stone of Aja.

Stroheim as a Cyborg

Thanks to Nazi science, Colonel

Stroheim was revived with cybernetic parts (including a machine gun on his chest and a monocle that presumably serves as a Terminator/Robocop-esque radar system). He challenges Kars to a duel and is quickly cut in half, but is ultimately able to separate Kars from the stone by firing a ultraviolet beam from his eye.

saves Joseph from Kars' impending vampire army just in the nick of time. Kars is defeated by Joseph soon after and is sent falling onto a spikes below, where Stroheim and his division blast him with ultraviolet light. They fail to realize, however, that Kars had donned a Stone Mask with the Aja and are dumbstruck when he achieves his ultimate form and begins killing them off with a squirrel formed from his right hand.

After Joseph hijacks a Nazi aircraft to lure Kars away, Stroheim reveals himself in the side wing of the plane just before it goes plummeting into an active volcano. After pinning Kars to the front end of the aircraft, he pulls Joseph out of the plane and cushions their fall by sacrificing his cybernetic legs. The volcano eventually erupts when Kars' Ripple collides with the Red Stone of Aja, launching both Joseph and him into the air. Stroheim eventually returns to the rest of the group and reports Joseph's supposed death.

After the battle with Kars, Stroheim had Joseph Joestar's severed left hand replaced with an mechanical one as a gift but never meets Joseph again. He died honourably offscreen at the battle of Stalingrad

Stroheim makes his first video game appearance in the PS3 title. Appearing as one of the Campaign Surprise Support Characters, where he shoots the opponent's profile with his machine gun (in the same way he attacked Kars during the events of Part 2), decreasing their health bar by 40% before the fight.

Stroheim appears as one of the several Part 2 characters who possess a Metal Striker. His FINISH move makes him shooting several bullets of his Torso-Machine Gun at the defeated opponent and his Level 3 special ability allows him to destroy himself after defeat, damaging any Metal Striker near him (enemy or ally).

Stroheim was one of the first characters confirmed to be playable in the game (alongside Jotaro Kujo, Joseph Joestar, Noriaki Kakyoin, Josuke Higashikata, and Diego Brando).

Stroheim has the exclusive Style fully named My body! It's the pride of the German people, and the prime example of our superior German Science! (ゲルマン民族の最高知能の結晶, Geruman Minzoku no Saikō Chinō no Keshō, German's Highest Intelligence Crystallize), shortened to The Prime Example of Superior German Science.

While in Heavy Machine Gun Mode:

While in UV Radiation Mode:

As in the anime, he's voiced by Atsuhi Imaruoka. Eyes of Heaven also marks the first time Stroheim appears in a video game as a playable character.

In the Western release of the game, Stroheim's default outfit (with his military uniform) was removed, most likely due to sensitivity regarding the display of Nazi symbols.

He is paired with Okuyasu Nijimura in the Eyes of Heaven Tournament, but was eliminated in the preliminaries by Mariah and Esidisi.

Stroheim appears in Diamond Records as a playable character. Interestingly enough, it is his original, non-cyborg form that appears in the game. He utilizes a knife and a Stielhandgranate in his special attacks, otherwise unleashing normal punches and kicks.

Skill: Resolution to Blow Himself Up

Replaces random Panels with Stroheim panels and erases all of them.

Stroheim panels won't appear anymore. (Can only be used once per battle)

Replaces random panels with any single cheer panel, then erases all of them and that character's panels will no longer appear. The appearance rate of partner panels is doubled, except in Rush Time (Can only be used once per battle)