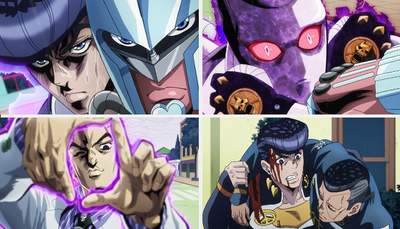 As Hayato Kawajiri's plan to stop Kira has seemingly failed, the serial-killer accidentally says his name in public. Thankfully, the boy has made it so Josuke is there to hear Kira confess that he is the killer. 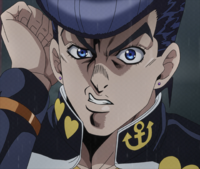 Josuke hears Kira slip out his own name

It is 8:29:09AM, just before Rohan Kishibe dies. Kira is still impressed by his own luck and almost hits Hayato for daring to use Stray Cat to kill him. Recognizing the move as useless, Kira then realizes that Hayato could only act with this much planning ahead by having rewinded time thrice and killed at least as many enemies. Sure of his win, Kira openly brags about his victory and how "luck is on the side of him, Yoshikage Kage". However, Hayato lets Kira know that he slipped out his name and explains that he's had a backup plan. Indeed, he's made a phone call just to wake someone up early. Kira then realizes the magnitude of his mistake when he sees Josuke looking at him with an angry look.

Bites the Dust is cancelled, stopping the Joestar group's deaths

Having heard everything, Josuke and the freshly arrived Okuyasu attack Kira. The murderer is thus forced to cancel Bites the Dust and recall Killer Queen at his side, confirming Josuke's suspicions. Moreover, Rohan has escaped death, meaning Hayato has finally broken Bite the Dust's curse.

Forced to engage in a battle against Josuke and Okuyasu who are still looking to avenge Shigechi, Kira reaffirms his commitment to a peaceful life but also boasts that he won't lose when backed into a corner and knows all about the group's ability. Crazy Diamond and Killer Queen engage each other but Crazy Diamond takes the advantage. As Killer Queen tries to touch Josuke, Okuyasu intervenes and makes Kira turn toward himself with The Hand, only for his side to be blasted apart. Kira has just stored Stray Cat in Killer Queen's belly and now has an infinite supply of invisible remote bombs.

Meanwhile, Jotaro, Koichi and Rohan fail to notice Josuke's cries. Meanwhile, Josuke realizes how deviously powerful Kira's air bomb and gets hit. However, Josuke also guesses that they have a minimal range in order for Kira to not get caught in the blast. Rushing to Okuyasu's side in order to heal him, Josuke is saved by Hayato who guesses that Okuyasu's body might have been turned into a bomb, leaving Josuke with the tough decision of whether to sacrifice himself to save Okuyasu. However, Hayato, also deducing that Kira can only set off one bomb at a time, sets off the bomb on himself, allowing Josuke to heal both him and Okuyasu. As Kira launches another air bomb, Josuke, refusing to believe Okuyasu might already be dead, manages to use Crazy Diamond on debris in his wounds to dodge the explosion.

Josuke and Hayato soon retreat into an empty house, carrying Okuyasu's body with him as the rain stops. Kira, meanwhile now no longer believes that Jotaro isn't the greatest threat to his peaceful life, but Josuke is.

“
This is where the ultimate fight begins. Between Bites the Dust’s cancellation, Okuyasu being wounded, and Josuke and Kira's face-to-face, the episode is just full of twists. I remember feeling very motivated when looking over the storyboard.

In regards to the breaking heart visualization that shows when Bites the Dust is deactivated, I took a bit of inspiration from the second opening, specifically when the hand squeezes the heart until it explodes. I loved this scene and wanted to use it again in the series. Mission accomplished, the circle is now complete.

When we discover Stray Cat in the belly of Killer Queen, the colors veer into mostly red tones to symbolize anger. Regarding Stray Cat, his attack where it launches an air bubble was achieved by displacing the layer and inflating it to show how it approached its target. Had it been required to draw this by hand, it would have taken significantly more drawings. This is especially bad since the drawings were getting more and more detailed now. This is proof that our animators are 100% invested in the series. I should perhaps use them as an example for the character profile art. (laughs)
”
—Naokatsu Tsuda, Blu-Ray limited edition commentaries