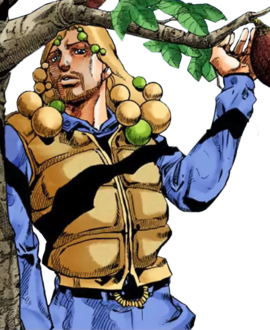 Eyes of Heaven
“
Everything here has a natural "flow". Now "flow" is a metaphor, but if you don't fight it, you'll definitely reach your goal.
”
—Norisuke Higashikata IV, JJL Chapter 33: Josuke! Go to the Higashikata Fruit Parlor

Norisuke is a Stand User and can track specific smells through his King Nothing.

Norisuke is a post-middle-aged man of average to above-average height and average build. He has light, shoulder-length hair with spheres along its length in increasing size, and stubble or a light beard.

He wears a tan puffer vest, with a light turtleneck jumper, light pants, and a belt with a buckle in the shape of a heart.

Norisuke first gives the impression of being a laid-back and happy old man. He greets Josuke with a smile and then en route to his house, describes himself as a "yanki", a subculture of delinquency that was popular in the 80's and 90's in Japan,[4] before laughing openly in the presence of Josuke and Yasuho. He maintains an ability to joke. During quiet moments, Norisuke consistently demonstrates a genial and enthusiastic side to him, for instance proudly showing his fruit shop to Josuke or happily performing morning exercices.

Later, Norisuke ominously warns Josuke that "[his] word is the law" in the Higashikata family home, in a rather traditional demonstration of paternal authority. However Norisuke proves that he isn't evil by helping Josuke in his quest for identity, although he confesses that he only helps him out of interest.

Norisuke has a deep love for his family and can be quite insular. He looks over all of them and loves them, working with Josuke in order to retrieve the cure he thinks Kira had for the Rock Disease and being sorry for Holy's state as she is a relative. Norisuke is particularly close to his eldest son Jobin and his daughter Daiya, while considering Joshu a problem child without scolding him too severely. Norisuke sees his children as still being innocent; he warns Yasuho not to tempt his son Joshu. He also becomes angry, swearing to kill Josuke, after witnessing what appears to be a romantic affair between Josuke and Daiya, though he calms, happy to "keep Josuke a slave and prevent him from retrieving his memories". When he is introduced to Tamaki Damo, Norisuke is revealed that he cannot bear the thought of his daughter having sex with someone. Also, when Damo questions him on Kira's wherabouts and threatens to kill Hato his daughter he agrees to talk in exchange that Damo return his children to normal and not kill his children. On the other hand, Norisuke is hostile toward Kaato, his ex-wife, presumably because her crime was a stain on the Higashikata Family's honor. He notably cut all contacts with her and refuses to give her a cent for her so-called sacrifice.

While he does love his family more than anything, he seems to have grown fond of Josuke as he helps protect him and search for information about him. When Damo tortures him to find information on Josefumi's whereabouts, Norisuke knows Josuke is his target but refuses to tell even at the possibility that he will be killed. In addition, when forced by Damo to rat out on Josuke or have his family killed, he is forced to choose his family but sincerely apologizes to Josuke for not being able to protect him, showing he still cares for him as an ally.

Kaato notes that Norisuke has a subconscious tic of touching his chin whenever he has something to hide.

King Nothing is Norisuke's long-range Stand, able to track targets by memorization of smell; copying their movements, in sequence. 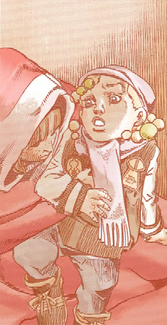 Tsurugi divulges details of a superstition practiced by the Higashikata clan of dressing all firstborn sons as girls until 12 years of age, in order to ward away specific "demons of sickness", referring to a mysterious, medically unresponsive bodily affliction suggested as having origin in some Stand effect.[5]

Flashbacks reveal that Norisuke was also affected by the Rock Disease at the age of ten, but his mother had saved him by taking his place throughout equivalent exchange.[6]

During his life, Norisuke has married himself to Kaato and had four children with them, in order of birth Jobin, Hato, Joshu and Daiya. When Kaato was put in prison for murder, Norisuke filed for divorce to preserve his family's reputation and made every effort to hide Kaato's existence from his children. He also inherited the Higashikata Fruit Company and becomes its head. In 1998, Norisuke met Rai Mamezuku, who was 17 at the time, and bought some of his strawberries grown on a mountain slope. Impressed by their quality, Norisuke hired him as a plant appraiser but kept his existence a secret. During his life, Norisuke refused to expand his business beyond selling luxurious high-class fruits, to Jobin's frustration.

At one point before the beginning of JoJolion, Norisuke heard of Yoshikage Kira's effort to find a cure for the Rock Disease. Although he was interested, Norisuke didn't contact Yoshikage to know more about it.

After Josuke's initial efforts to discover his identity end in failure, Norisuke comes to the forefront and adopts Josuke within his family, in the hopes Josuke regains his memories and reveals the secret of the cure. Acting nice but also secretive, Norisuke initially instructs his new ward him to take care of Daiya. However, when he walks in on Josuke and his Daiya in an intimate situation, he is enraged and promises to kill Josuke later. He proves to know of Daiya's Stand, California King Bed, as he thought that Josuke would be under Daiya's control.

He later quells a confrontation between Josuke and Joshu, asking Joshu to get along, before bribing him.

When Josuke confronts Norisuke about his relationship with him, Norisuke denies being involved in any way in Josuke's state and reveals that his family is afflicted with the same Rock Disease as Holy Joestar-Kira. Norisuke also tells Josuke that he hopes to find the cure Kira had for the disease, but because of his death, he has to rely on Josuke.

Norisuke then witness Josuke being attacked by Yotsuyu Yagiyama and his Stand I Am a Rock. He chooses to help Josuke, and with his Stand King Nothing, contributes to the architect's defeat.

After Yotsuyu is killed, he examines the remains of the Rock Human, asking himself where his comrades are. Norisuke later manages to find the dog Tsurugi saw, and also finds the mysterious fruit Tsurugi was talking about. Refusing that Tsurugi eats it, he has King Nothing memorize its scent and goes to the Higashikata Fruit Parlor in order to identify the fruit. In the meantime he also takes time to present his business to Josuke.

His search is interrupted when he meets his eldest son Jobin Higashikata, who has returned from a business trip overseas. Overjoyed to see him, Norisuke returns home immediately with Jobin, unaware that King Nothing has smelled the scent of the fruit on Jobin. Josuke goes on to continue his own investigations with Yasuho Hirose.

Damo soon reveals himself as the head of the Locacaca Smuggling Organization Josuke has been dismantling. The Rock Human incapacitates the whole family, but keeps Norisuke around to interrogate him and torture him. At wit's end, Norisuke reveals Josuke's significance to Damo. Ensues a short fight between Damo against Hato and Josuke, during which Norisuke is liquefied and serves as bait. However, Damo is fortunately defeated.

One day, Norisuke's former wife Kaato returns home, and she confronts the whole family, asking compensation for her time in prison. Kaato deliberately sticks around but Norisuke refuses to give her anything.

Meanwhile, Josuke has learned about his identity and has switched his goals to saving Holy Joestar-Kira his mother. Josuke asks Norisuke for help to find the fruit, and also reveals his suspicions about Jobin being an accomplice of the Rock Humans. Although Norisuke refuses to believe Jobin is involved, he reveals Rai Mamezuku's whereabouts, and points Josuke to him for help.

Norisuke takes a backseat to the action, but learns of the consequences of the struggle for the new Locacaca through the news, seeing that Josuke and Rai are chased by the police and that Ojiro Sasame and Maako Kitani have died. When Tsurugi's Rock Disease truly triggers and his body is threatened by the illness, Norisuke expects to sacrifice himself in the Wall Eyes. On the day of the harvest, a string of events result in the Higashikata Family catching Jobin and Mitsuba trying to drown Paisley Park. Norisuke immediately saves Paisley Park, and hears Yasuho pleading to let her Stand go into a power outlet to escape. Norisuke demands to know what is going on, leading to Jobin explaining himself. Jobin reveals how he's obtained the new Locacaca, and claims that his plan is the right path for the sake of the family. While Norisuke wants to follow his son, he wants to confirm if Jobin's plan is the right thing for his family. He summons King Nothing and investigates a feint smell on the fruits, and his Stand materializes Ojiro Sasame trying to steal the pot. A clear connection between Jobin, the fruit and Ojiro's death is made. Shocked, Norisuke also sees Yasuho agonizing outside. When he turns his head to clear his suspicions, Norisuke sees Speed King. Jobin induces a heat stroke in Norisuke, asking for forgiveness. Norisuke collapses, cradled by his son.

Countdown to the Harvest

Norisuke is only seen in this chapter in a body bag hidden by Tsurugi. His exact fate is unknown, but he appears either gravely injured or possibly dead.

Josuke Higashikata: Mutually suspicious; Josuke's natural curiosity as to his origins and Norisuke's intentions carries him beyond the boundaries set for him by the Higashikata patriarch as condition to his residence at the family home, which Norisuke appears to have offered under ulterior motives. He reveals that he knows Josuke has some link to Yoshikage Kira who had information on how to cure the family and for that reason adopted Josuke in hopes of acquiring that information. Norisuke later reveals himself as an ally, and the two hold a mutual trust for one another. Norisuke still places his family above all else, but seems to have grown to care for Josuke as family and even a possible surrogate son (one main example being when Damo tortures Norisuke to get information about Josefumi and Kira from him. While he knows Josuke is somehow involved, he does not rat on him until Damo threatens to kill his family. Even during this, Norisuke breaks down crying and sincerely apologizes to Josuke for not being able to protect him, showing the depth of his care).

Norisuke appears as the shopkeeper in JoJo's Bizarre Adventure: Eyes of Heaven, where you can buy additional costumes, colors, dual combo poses, victory poses, and extra dialogue. He is also in the background with King Nothing in the Higashikata House stage.