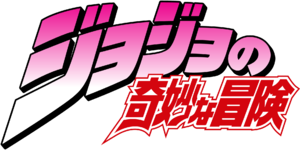 “
I'd say living with a positive outlook is the theme of JoJo. It's a celebration of humanity.
”
—Hirohiko Araki

written and illustrated by Hirohiko Araki, and the main subject of this wiki project.

JoJo was serialized in Weekly Shonen Jump from 1987[2] until 2004, when it then transferred to the monthly seinen

magazine Ultra Jump, where the current story continues. The series is collected in a variety of formats ranging from standard Tankōbons to special edition volumes such as Bunkobans and Kanzenbans all of which contain the manga as it was serialized in Weekly Shonen Jump and Ultra Jump with some differences such as chapter names being different and dialogue changes.

The series has over 100 million copies in print,[3] making it one of the best-selling manga series

in history. Filling over 120 volumes, it is Shueisha's second longest-running manga series. Publication in English of the earlier parts of the series is ongoing.

JoJo's genre spans Action, Adventure, Supernatural, Thriller, Comedy, Tragedy, Mystery, Slice of Life, and Horror. It is perhaps most popularly known for its Stand phenomenon; the Stardust Crusaders arc and its characters Dio Brando/DIO and Jotaro Kujo; the expressive rendition of its proud, glamorous personalities; and its hundreds of nominal references to Western popular music.

Adding to the JoJo canon to varying degrees, Araki has authored several spin-offs and related artbooks; and several light novels have also been produced, all containing his illustrations.

JoJo was previously the longest Shueisha manga series to have not received an animated adaptation for television. However, the official anime TV series finally made its debut on October 6, 2012 (separating the manga and anime debuts by twenty-five years); designed by animation studio David Production.

Its range of other merchandise includes several adaptations in video games, including three fighting games of international release; Heritage for the Future by Capcom

board) in 1998; All Star Battle by Bandai Namco Games

The story in JoJo is divided between two continuities. The first includes Parts 1 to 6, detailed in Weekly Shonen Jump from 1987 to 2003, while the second includes Parts 7 and 8, detailed in seinen magazine Ultra Jump from 2004 to the present. The plot across these stories is supplied in multi-chapter arcs detailing precarious, melodramatic conflicts between parties defined both by unique supernatural powers, mainly by the versatile Stand phenomenon, and exclusive ambitions, attitudes or moral standards. These arcs vary in tone, alternating adventure, suspense, mystery, and horror; always through action, and with frequently embedded comedy. Typically, a race emerges among the heroes of a story to intercept a powerful central antagonist.

Many references to modern film, television, fashion, fine art, and popular music are readily identifiable throughout JoJo in many settings and both the characterization and nomenclature of the cast. Examples of physical, mathematical and psychological theory, biology, technology, mythology, natural phenomena, historic events, and segments of other artistic work inform the design and functionality of the multitude of unique Stands. The series occasionally makes fanciful developments upon contemporary scientific theory in creation of the routes by which certain Stands and other powers exert their influence on nature.

Morioh, fictional Japanese town and base of Diamond is Unbreakable and as a distinct incarnation in the ongoing JoJolion shares its coordinates with Araki's hometown, Sendai

,[4] assuming a more culturally detailed description and referencing more contemporary topics (such as the 2011 Tohoku earthquake

) than other settings. Additionally, Stand-wielding mangaka Rohan Kishibe, a resident of Morioh introduced in Diamond is Unbreakable, returns as a guide in a number of JoJo spin-offs.

Hirohiko Araki, asked in 2006 to describe the subject of JoJo in a phrase, answered "the enigma of human beings" and "a eulogy [to] [the] human";[5] and as his attitude to manga, "the salvation of the heart".[6] Subjects in the text of the manga may be condensed under themes of Destiny

The first continuity follows an intergenerational feud between the Joestar Family and various forces of evil, the most prominent of which is Dio Brando and his followers. 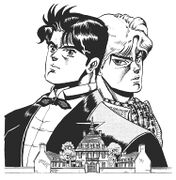 The first part Phantom Blood, set in England in 1880, follows Jonathan Joestar as he matures with and eventually combats his adoptive brother, the cunning, merciless Dio Brando who becomes a Vampire with the help of an ancient Stone Mask. Jonathan is trained by Will Anthonio Zeppeli in the vibrant energy of the Ripple, wielded in the human body and transferred in hand-to-hand combat, which is the only sure way apart from sunlight of defeating Vampires and their Zombie minions.

The second part Battle Tendency sees Jonathan's grandson Joseph Joestar crossing the world in the days leading up to the Second World War in 1938 to combat the Pillar Men, an ancient race of hostile beings responsible for the creation of the Stone Mask. Like his grandfather, Joseph undergoes strenuous Ripple training alongside Caesar Anthonio Zeppeli, Will's grandson, by the secretive Lisa Lisa and tries to protect the Red Stone of Aja, a gem sought by the Pillar Men to complete the Stone Mask and grant them immunity to the Sun. 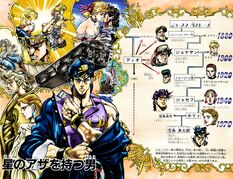 The saga of the Joestar so far

The third part Stardust Crusaders is set during 1988-1989 as Joseph's grandson Jotaro Kujo journeys along with Joseph, Muhammad Avdol, Noriaki Kakyoin, Jean Pierre Polnareff, and Iggy from Tokyo to Cairo in order to fight DIO who has returned from the depths of the sea and save his mother from DIO's mystical influence. From now on allies and villains alike primarily use Stands, a usually humanoid representation of the person's spirit, which has become one of the series' most prominent features.

The three first parts constitute a trilogy after which Hirohiko Araki intended to end the series, but JoJo's Bizarre Adventure continued nonetheless after the end of the third part.[7] 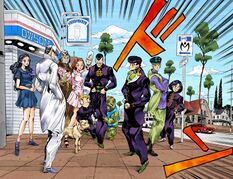 The warriors of Morioh

The fourth part Diamond is Unbreakable is set in the fictional town of Morioh, Japan, in 1999. It follows Joseph's illegitimate son Josuke Higashikata as he meets friends and enemies among a host of new Stand users within the population of Morioh created with the Bow and Arrow, two items which gave DIO his Stand. He, Okuyasu Nijimura, Koichi Hirose, Jotaro Kujo, and Rohan Kishibe eventually chase the serial killer Yoshikage Kira.

In the fifth part Vento Aureo, set in Italy 2001, DIO's son Giorno Giovanna fights his way to the top of Passione, the most powerful gang in Italy, as he plots to overthrow the gang's mysterious Boss in order to protect the civilian populace from the gang's drug trade. To do so he cooperates with gang member Bruno Bucciarati and his own team of Leone Abbacchio, Guido Mista, Narancia Ghirga, and Pannacotta Fugo as they are tasked with protecting the Boss' daughter Trish Una from the assassin teams Squadra Esecuzioni and Unità Speciale.

The sixth part, Stone Ocean, is set in 2011 as Jotaro's estranged daughter Jolyne Cujoh is framed for murder and imprisoned in Green Dolphin Street Prison. Jotaro then has both his memories and Stand stolen by the Stand Whitesnake after an attempt to free Jolyne. She then decides to stay imprisoned in order to find out both who Whitesnake's master is and what he plans to do with Jotaro's memories and Stand. Along her adventure, Jolyne gains allies in Emporio Alniño, Ermes Costello, Foo Fighters, Narciso Anasui, and Weather Report. 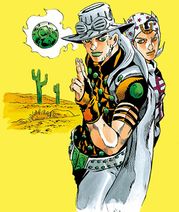 Set in 1890 in the United States, Steel Ball Run follows a race across the continent of the United States of America. The race is called the Steel Ball Run horse-race and is named after the sponsor, Steven Steel. The protagonists are Gyro Zeppeli, a master of the unique Spin technique seeking the cash prize and Johnny Joestar a paraplegic ex-jockey seeking to cure his legs through the Spin, both cooperating to win the race. Johnny and Gyro discover that the race is a cover-up from the President Funny Valentine to uncover the powerful and invaluable relics of Jesus Christ, eventually also hunting for said relics while fending off Valentine's many agents.

Leaping to 2011 in JoJolion, university student Yasuho Hirose discovers an amnesiac man tentatively named "Josuke" in Morioh after the (then-contemporary) Great East Japan earthquake. Both then decide to investigate Josuke's past identity, initially thought to be that of the ship's doctor Yoshikage Kira, and the circumstances of his presence in town, leaving him in the care of the affluent Higashikata Family as both uncover the family's darkest secrets and a drug trade involving a mysterious race of humanoid beings and an equally mysterious fruit.

The second continuity features many nods to characters of the former continuity including restyled main characters, Stands and locations.

Chapters are serialized in Weekly Shonen Jump and Ultra Jump, under Shueisha. While in Weekly Shonen Jump, the series was published under the tagline "Romantic Horror! -A Crimson Tale-" (ロマンホラー!—深紅の秘伝説—, Romanhorā!-Shinku no hi densetsu-). The tagline was created by the editorial department at Shueisha and was included in every chapter up until Stone Ocean.

In North America and the United Kingdom, Stardust Crusaders was translated into English and published in 16 volumes by VIZ Media from November, eighth 2005 to December 7, 2010 under the title of JoJo's Bizarre Adventure, skipping both Phantom Blood and Battle Tendency. On June 9, Viz Media published the first three parts of JoJo's Bizarre Adventure from the JoJonium line of manga, from February 24, 2015 to February fifth, 2019, marking the first English publications of Phantom Blood and Battle Tendency. On July 6, 2018, Viz Media announced they would be releasing an English publication of Diamond is Unbreakable. The first volume of Diamond is Unbreakable was released on May 7, 2019. Diamond is Unbreakable is still currently being released.

In Italy, Star Comics began publishing the series in a monthly format under the title Le Bizzarre Avventure Di JoJo from November 1993 to April 2004,[8] these monthly releases contained around five chapters in each trade paperback with 126 paperback volumes released. These releases would then be followed up in March 2006 with translations of the Steel Ball Run volumes that were published until February 2012. During this time, Star Comics published the JoJo's Bizarre Adventure (Bunko Edition) volumes with their Italian translation of the series starting from 2010. Currently, they have been publishing JoJolion since February 2014 and have begun releasing the JoJonium volumes since October 2019 with further releases still on-going.

In France, the first four parts were published by J'ai lu[9] from January 2002 to December 2005. In 2007 publisher Tonkam (now a subsidiary of editions Delcourt

resumed the publication of the following parts starting with a publication of Vento Aureo, the previous parts would later see revised releases under Tonkam's publication starting with Stardust Crusaders and then going back to Phantom Blood and continuing from there. Currently, they are publishing JoJolion.[10]

In Spain, the entire series is being published by IVREA. Phantom Blood started publication on June 30, 2017. This publication uses the same volume count as the Bunko Edition volumes, these volumes come out monthly. They are currently publishing Vento Aureo as part of their publication.

In Argentina, the first four parts are being published by IVREA Argentina.

In Mexico, the first five parts are being published by Panini. Publication started on August 1, 2018 with Phantom Blood using the same volume count as the Bunko Edition volumes, these volumes come out monthly. The current part in publication is Diamond is Unbreakable.

In Brazil, the first three parts are being published by Panini.

In China, JoJo was illegally distributed under the title Strongman Front (強人陣線) by Tong Li Comics

for many years until Daran Comics obtained the official publishing license for JoJo, renaming the comic JoJo Adventure Wild (JoJo冒險野郎). On March 31, 2003 Daran Comics shut down their offices and their license for JoJo was officially obtained by Tong Li Comics who now officially distributes the series in Taiwan and reverted the title of the series back to JoJo's Bizarre Adventure (JoJo的奇妙冒險). Currently, the series is being published by World Publishing Limited

as they are currently releasing a publication of JoJolion.[11]