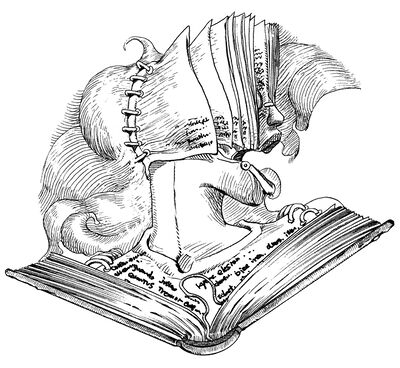 The Book is the Stand of Takuma Hasumi, featured in the light novel The Book: JoJo's Bizarre Adventure 4th Another Day. It is a book Stand that stores Takuma's memories and can make someone relive the memories when they touch its pages.

The Book appears as a hard covered Tankōbon-size book with a brown leather cover on which traces of ancient scratches can be seen. Its cape has no title or author name. It is about 380 pages thick, about 3 centimeters.

When Takuma opens the book, despite its relative slickness, he cannot reach the back cover, as more pages manifest themselves endlessly. If touched, it is noted that the book is warm like human skin and a sensation of slow breathing can be felt.

The text inside relates the entirety of Takuma Hasumi's life down to every detail noticed and thoughts.

The Book is an automatic Stand: Part Tool, Part Ability. As a simple book, it doesn't have any fighting ability whatsoever. However its esoteric power is put to use by Takuma with imagination, making it surprisingly deadly.

One of The Book's most important features is its range. Although it can only affect someone up to 2 meters[1] it can still maintain itself within 30 meters around Takuma.[2]

Takuma is able to remotely control The Book in a limited fashion, being able to order it to open and flip the pages itself but unable to make it move.[3]

Although it is usually invisible to normal people, Takuma can make anyone consult the pages as long as they can see the text, distinguish and understand it.

Takuma has the natural ability to memorize everything he sees, listens, or senses all the time on the smallest details. The Book stores all those memories on its pages in the form of a continuously appearing text, which Takuma can read at any time and remember them as if they were taking place at that instant.

Before Takuma could control his ability, his eidetic memory became a burden on his consciousness to the point where he kept falling down "Memory Holes", where one memory would keep linking to another and yet another for hours on end. It got so bad that Takuma tried to commit suicide on separate occasions. However, the full manifestation of The Book enabled Takuma to control his thoughts. The Book not only records Takuma's memories, but also gives Takuma the ability to not automatically recall memories and only have recollections of them.

The memories stored in The Book are detailed and encompass the entirety of Takuma's life since his birth. They are written in the first person, as if Takuma was writing his diary. This means that when Takuma was a baby, he could only record a limited amount of feelings. Takuma can only begin to consult his memories starting from the most recent page and it takes time to flip all the pages to the desired date. Several harmful memories are contained within "forbidden sections" of The Book, specific pages narrating life-threatening events or particularly dangerous incidents from Takuma's life.

If Takuma rips off a page, the memories contained on the page do not disappear and will reappear the next time Takuma uses The Book.

If anyone reads a page in The Book, the same thing will happen to them.

When the text is read, the mind of the reader naturally "Empathizes" with the narrator. However the Empathy effect is multiplied so the body is fooled into believing that the read events actually happened to the reader. The implanted memories keep all details that Takuma experienced by himself, including the environments, sensations, and cognition, and therefore are able to make the person share the exactly same experience as Takuma. In some cases, the body of the reader may change to reflect the events of the memory.

Takuma has used this ability in two ways. First, he can make a target read several of the life-threatening incidents he's experienced, Takuma is able to severely injure them, disable them, and outright kill them. The body of the victim will fall ill or even injure itself through a powerful autosuggestion, resulting in spontaneous wounds or ailments. Although the incidents cannot be fatal by themselves, Takuma can simply leave an injured victim alone to die from their injuries. It is a double-edged sword as Takuma could also fall victim of The Book if he handles it carelessly and glimpses the pages by mistake.

Secondly, Takuma can accelerate the learning of any skill by continuously reading a memory of a successful attempt in anything, making himself effectively train himself over and over. It allowed him to learn knife throwing within a short span of time.[3] There are several limits to the memory implantation.[1]