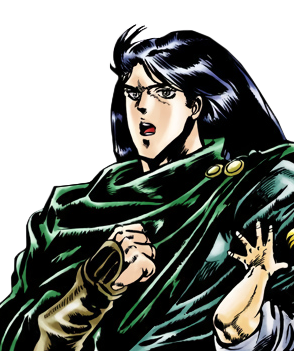 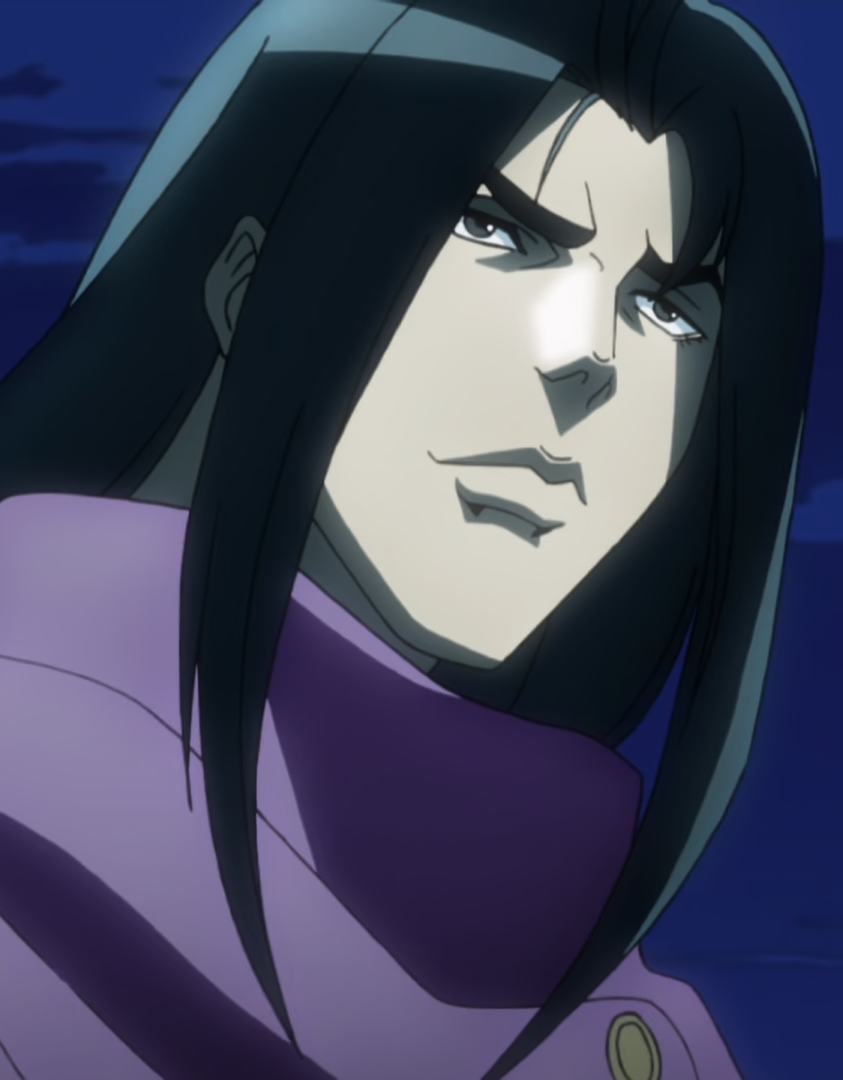 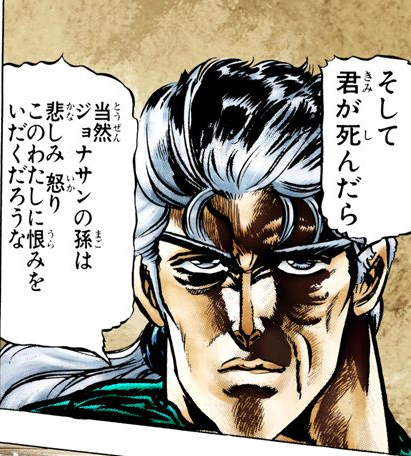 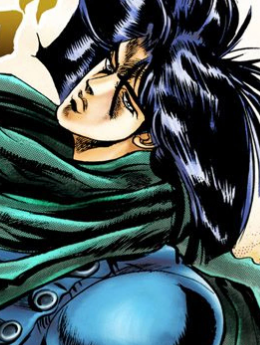 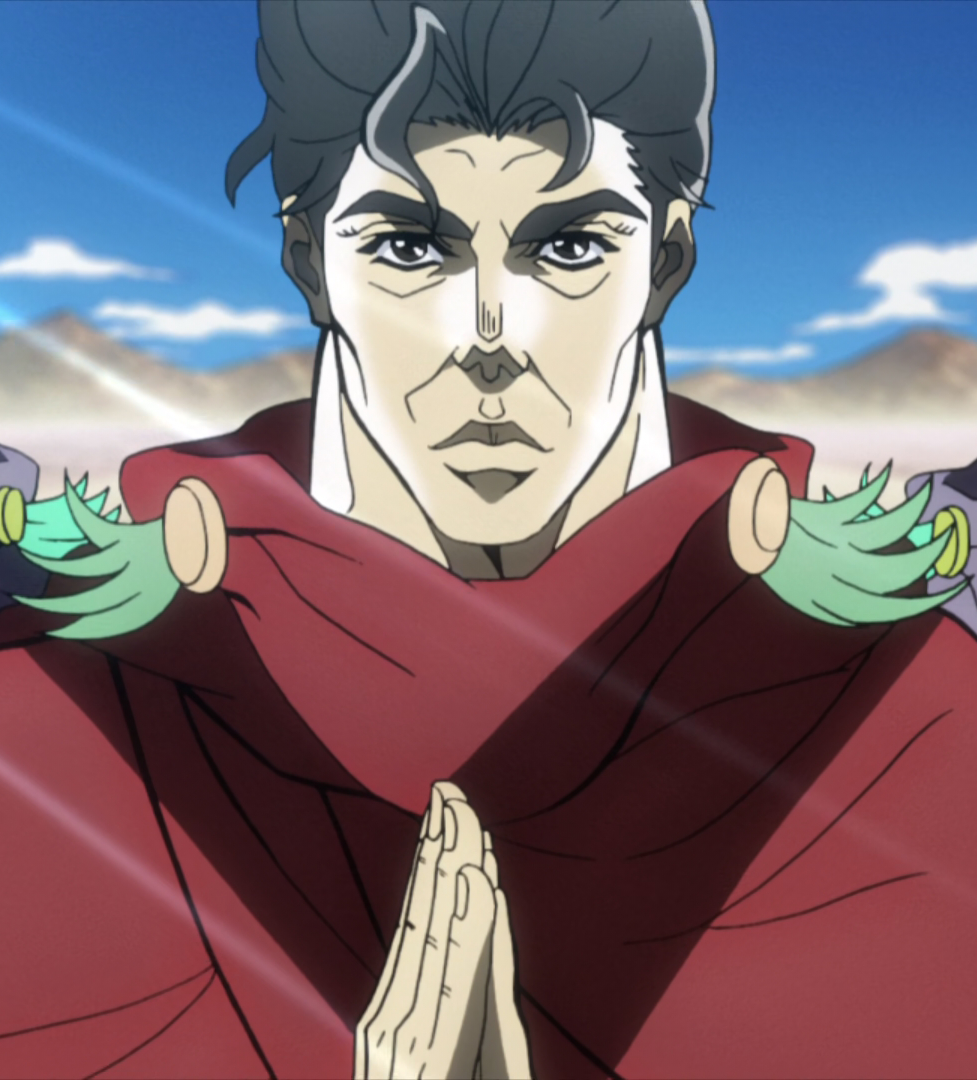 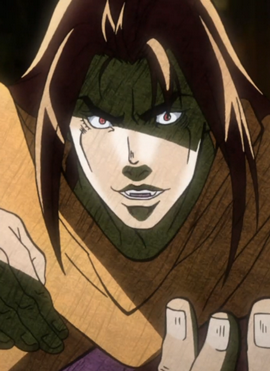 The character featured in this article is sometimes referred to as "Straights" or "Straits".

Straizo (ストレイツォ, Sutoreitso) is a minor ally in the 1st part of JoJo's Bizarre Adventure, Phantom Blood, and a minor antagonist in the 2nd part, Battle Tendency. First a Ripple master, Straizo later becomes a Vampire to gain eternal youth.

Straizo is a male of average height and athletic build with long, straight dark hair. During the group's battle with Dio, his attire consisted of a thick tunic complete with wristbands, knee pads, and a large cloak.

His outfit undergoes very little alternations as an old man, but after regaining his youth, he dons a double-breasted jacket and scarf. The scarf is revealed to be made up of the wings of 30,000 Satiporoja beetles found in Southeast Asia.[4]

“
During the fight with Dio 50 years ago, I admit that I admired him... that power, that beauty, that immortality! I want the power of the Stone Mask for myself! Now that I've grown old, I want to become a being that surpasses all!
”
—Straizo to Joseph, Chapter 46: Joseph Joestar of New York, Part 2

When Straizo appears alongside Tonpetty and Dire, he initially has the impression of being a noble Ripple user who wants to put an end to Dio's ambitions of world domination in order to protect humanity. He also has the habit of uttering the phrase "I, Straizo will show no mercy".[5] Straizo then becomes an acquaintance of Speedwagon during the 50 years leading up to Battle Tendency, with the latter trusting him to destroy Santana before he had reawakened.[6]

Straizo was, however, revealed to be a villainous person with gerontophobia

. Straizo explained that he trained in the Ripple to become stronger, but his powers only made him even more aware of his human limitations.[7] He admits having admired Dio's overwhelming strength as a Vampire and when the Ripple proved insufficient to preserve his youth, decided to use a Stone Mask. In his search for a way to stop his aging process, Straizo killed friends and followers. He was ready to die for it, which was demonstrated when he killed the expedition group, along with his disciples, and nearly ended Speedwagon's life.[8] He died satisfied, knowing he would go to Hell as a young man rather than die of old age.[9]

He claimed that, unlike Dio, he would not toy with his enemies to explore the limits of his powers and would eliminate any potential threat as soon as possible,[10] going after Erina and Joseph because they knew of the Stone Mask. He was also aware that Joseph could become a potential threat to him in the future. Straizo's carefulness in his actions is further proved when he is revealed to have brought a scarf made of beetles from Tibet in order to negate Joseph's Ripple.[11] He also repeatedly shot the same pressurized eye liquid Dio used to mortally wound Jonathan. He further showcased his ruthlessness in order to test Joseph's spirit by taking a woman hostage and tearing out one of her teeth to show how serious he was about the threat.[12]

However, Straizo did maintain some good within him, as he didn't want to bring a bigger danger to Earth just to maintain his youth and warned Joseph about Santana's awakening in order to prepare him for the upcoming threat.[9] In spite of his faults, he managed to be a good enough adoptive parent to Lisa Lisa to have her become conflicted when she learned Joseph had killed him.

Straizo was a skilled human trained in the art of the Ripple on his own, capable of channeling ripples through solid objects to destroy multiple zombies.

After becoming a vampire, Straizo shares with them their basic characteristics of regeneration and increased strength, with the advantage of also knowing how to use the Ripple, being the only vampire to do so. However, it is rumored that this actually made him weaker, as the two sources of power are opposites of each other. His regeneration is notably much quicker and more efficient than Dio's as he was able to pull himself together from being blown to several pieces by Joseph's hand grenades at a quick pace without the need of having to drain the blood of a person first.

Straizo is, along with Dire and Will Anthonio Zeppeli, one of Tonpetty's followers. During the events of Phantom Blood, Straizo accompanies Tonpetty to the English town of Windknight's Lot after they have received a letter from Will asking for help in destroying the Stone Mask, but they arrive too late to prevent his death. He helps Jonathan in the fight against Dio Brando and his minions, easily defeating Page, Jones, Plant and Bornnam to protect Poco and his sister. During the fight, Straizo witnesses the power of the Vampires firsthand. He later appears to wish Jonathan and Erina a good honeymoon.

Straizo, posing for a photo with Erina, baby Elizabeth, and Speedwagon.

After giving birth to George Joestar II, Erina gives the infant she saved from the night of Jonathan's death to Straizo to raise as his own daughter. Later succeeding Tonpetty as head of their order, his Ripple skills allowing him to slow his aging, Straizo raises the girl Elizabeth as the Ripple user later known as Lisa Lisa. Called by Speedwagon to meet him in Mexico, Straizo gives Lisa Lisa the flawless Red Stone of Aja known as the Super Aja to guard it in his place.

After giving Lisa Lisa the Super Aja, Straizo is welcomed by Speedwagon upon answering his call to meet him in Mexico. Soon after, he is brought to an underground chamber under a recently discovered pyramid where he sees various stone masks and the figure that Speedwagon needs his help to destroy. However, having checked Speedwagon's translation notes the night before and asking about Joseph Joestar's Ripple mastery, Straizo suddenly kills his disciples and Speedwagon's men. After kicking Speedwagon to the ground, Straizo admits that he's envied the youth and vigor Dio kept from using the stone mask. Straizo then helps himself to one of the masks, using the blood of his victims to activate it while explaining his intent to eliminate all loose ends starting with Speedwagon and then the Joestars. The vampirized Straizo then dumps Speedwagon and the corpses into the nearby river, assuming the former will drown while ensuring the Pillar Man will not be revived by his victims' blood.

Once at New York City

, Straizo stalks Joseph Joestar while he is eating out at a dinner after sunset. Joseph notices Straizo, feigning ignorance of his identity as he leaves the dinner to inspect him before taking out a concealed Tommy-Gun to blasts Straizo through the bar's window. As a vampire and using a special scarf to safely neutralize Joseph's Ripple attacks, Straizo thinks that he has the upper hand but underestimate Joseph's resourcefulness, who ties several grenades to his scarf. The resulting explosion blows Straizo into several pieces, which gradually reassemble as Joseph runs off. Once fully regenerated, the naked Straizo kidnaps a lady reporter and intercepts Joseph at the Brooklyn Bridge where threatens to kill the girl if he runs again. Explaining that he is testing Joseph's character to deem if he is truly a threat to him or not, Straizo rips a tooth out of the girl's mouth to prove he means business and provoke the Joestar into fighting him. The fight ends with Joseph, using Ripple-infused shot glasses to redirect Straizo's eye beams, and then knocking the vampire off the bridge with a punch to the face.

But Joseph catches him at the last second, demanding answers concerning Speedwagon's death. Straizo reveals the existence of the "Pillar Man" that he and Speedwagon found, telling Joseph that he will cross paths with the being and learn the meaning of evolution. Straizo then releases the Ripple stored in his body to self-destruct, revealing he has no regrets for his actions and prefers going to hell in his prime.

Straizo appears as a playable character during one of the final chapters (against Pages, Jones, Plant and Bornnam) and "Extra Battle Mode". If the player manages to use his Special Ripple Move during the fight, a cutscene will appear and automatically end the chapter. Straizo, Jonathan, Zeppeli, Dire and Tonpetty are the only Ripple-user characters in the game.

As Straizo's role in Phantom Blood was fairly minimal, his game appearance and moveset is based on his only fight scene, with his special Ripple move being a continuous series of kicks beginning with "I, Straizo...". As the attack ends with a more powerful kick, he finishes his sentence with "..will not have pity!".

Straizo's Part 2 incarnation possesses a Metal Striker in the game. His FINISH move is based off of the action he performed on the young journalist, removing one of her teeth with his immense strength. Stardust Shooters marks the debut of Battle Tendency Straizo in a video game.

Enhances panels in a diagonal line, then erases the panels below those