From JoJo's Bizarre Encyclopedia - JoJo Wiki
Jump to navigation Jump to search
This page contains changes which are not marked for translation.
Intro
Gallery
History
Games 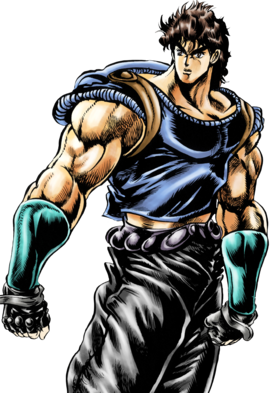 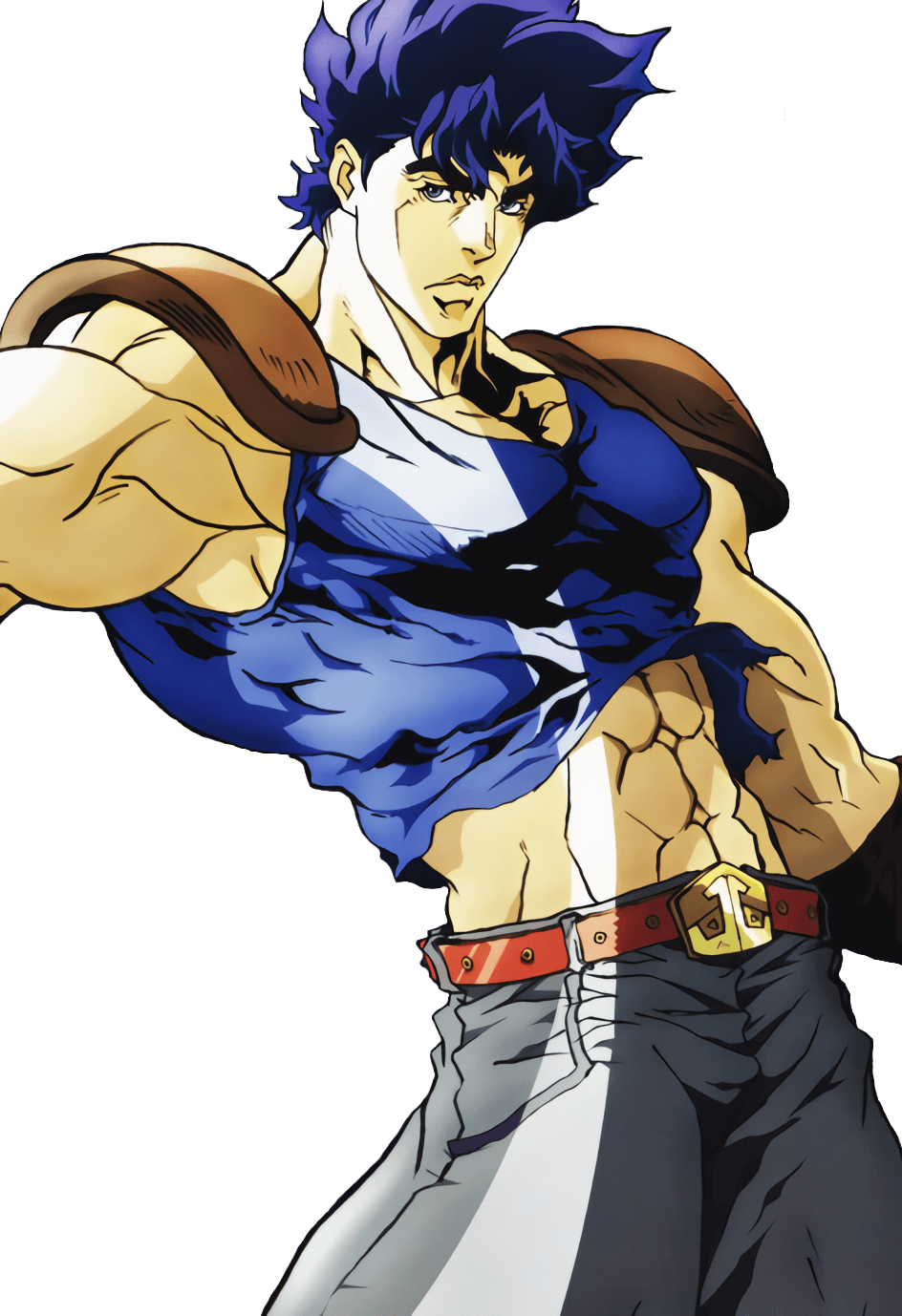 Phantom Blood (PS2 Game)
“
There are times when a gentleman has to be courageous and fight, even when his opponent is bigger than he is and he knows he's going to lose!
”
—Jonathan Joestar, Chapter 1: Prologue

Jonathan Joestar (ジョナサン・ジョースター, Jonasan Jōsutā) is the protagonist of the first part of the JoJo's Bizarre Adventure series, Phantom Blood, and the first JoJo of the series. His legacy extends throughout almost the entirety of the first six parts of the series, with major characters such as Joseph Joestar and Jotaro Kujo being his descendants.

Born the unique son of the wealthy businessman George Joestar I, Jonathan is an honest, kind, and positive man whose life is fraught with tragedy after meeting his adopted older brother - and series antagonist - Dio Brando. In his battle against Dio, Jonathan becomes a Ripple user under the tutelage of the master Will Anthonio Zeppeli.

Jonathan is the biological father of Giorno Giovanna, the protagonist of Vento Aureo, as well as a handful of other illegitimate offspring.

Adhering to the norms of the Victorian era

, Jonathan's childhood attire consisted of a collared shirt, breeches, and a pair of long socks with dress shoes. This was either accompanied by a blazer, vest, and tie, or a pair of suspenders. As a nobleman, he'd sometimes replace the tie with a ribbon-like his father's.[6] 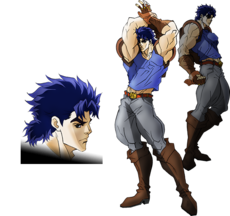 As an adult, Jonathan is a tall (195 cm/6'5"), extremely muscular individual with a gentlemen's poise. His typical attire tends to reflect his noble background, characterized by stylized tunics over long-sleeve shirts. Reoccurring articles of clothing include a cravat

, bowtie, thick boots and a vest.

During his childhood, Jonathan was proud and mischievous, yet gentle. Despite already aspiring to be a "true gentleman",[11] Jonathan lacked manners and mostly behaved like a normal child. His mother having died before he could remember her, and his fellow boys ostracizing him because of his status left Jonathan somewhat lonely.[12] While at first, Jonathan didn't have his future strength of will, Dio unwittingly became the catalyst of his growth by pushing him to the edge and humiliating his girlfriend Erina Pendleton.[13] However, he did have the kindness and courage to immediately jump to Erina's rescue against two bullies bigger than him despite not knowing her.[11]

First and foremost, Jonathan strives to become a "true gentleman." He carries his Joestar name with pride, never betraying the code of conduct he has set for himself and will treat any fellow human with respect unless they prove evil. 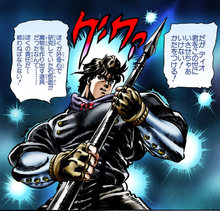 JoJo is determined to rid the world of Dio's evil

Jonathan also possesses a fierce inner strength and the drive to face and overcome conflict, which Dio calls an "explosive power". That drive, fueled by his affection to his friends and loved ones, enabled him to overcome the direst situations, notably managing to save his wife Erina when their boat was overcome with zombies and he was fatally hit in the throat.[14] Jonathan fights for what he believes in, and once he is committed to something, he won't back down until the deed is done. During his journey to find a cure for his father's illness, he was ambushed by a band of misfit hoodlums. He did not so much as flinch as he grasped an assailant's knife within his hand, saying he had much more riding on the fight than merely four fingers.[15] 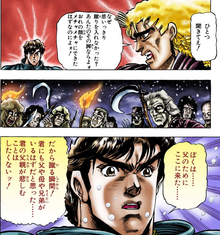 Explaining his reason for going easy on Speedwagon

As a gentleman, Jonathan is also kind and positive. Jonathan has a mindset where he tries to imagine the consequences his actions would have on other people, even if they appear to be enemies.[16] He is gentle and sympathetic, feeling pain even as he vanquishes a zombified copper. Despite his skill in fighting, he will never seriously harm a person without a valid reason. Even after everything Dio has done, Jonathan still considers him his brother, and sheds tears for him.[17] His courteous nature as well as his mental fortitude and ability to withstand fear and pain, is the main reason Speedwagon decides to aid him on his journey. During his life, Jonathan has always had an impulse to save others, beginning with Erina, and ending with his thought of a nearby baby just as he was agonizing from Dio's attack.[18]

Yet Jonathan can feel righteous fury at the evilness of his foes, and will conduct justice by vanquishing them. He admitted that his reason for fighting Dio wasn't out of duty for saving the world, but to avenge his loved ones that Dio had killed.[19] Moreover, he has no pity for truly despicable individuals he is not familiar with such as Doobie.[20]

With his courage and spirit, Jonathan sets a legacy as the first JoJo of the series.

Fascinated with the Stone Mask, Jonathan tried to study it and even took on the path of archeology.[21] However, not having thought of putting in on anyone, Jonathan didn't discover its true purpose himself.

Jonathan had lived a rough past as the son of an aristocrat, and was known in his childhood to have been at least a competent boxer. In his college life, he played Rugby alongside Dio Brando, and was revered as one of the two stars of Hugh Hudson Academy.

Even prior to learning the Ripple, Jonathan was able to hold his own against three thugs, Speedwagon among them, with sheer might and willpower. He was capable of wielding various weaponry held by the suits of armor in the Joestar Mansion. He had also performed incredible feats of strength, such as jumping from the hilt of a sword and hoisting himself up to the second floor while doing a flip over the guardrails, despite his arm being inhibited by a spear pierced into his pectorals. Perhaps his greatest display of strength was after being revitalized and empowered by Zeppeli's Ultimate Deep Pass Overdrive, where he ripped through 3 steel bars clutching his neck, a feat that even the mighty zombie Tarkus outright admitted he was incapable of.

Jonathan is shown to be an intelligent person and a very competent thinker during battles, constantly coming up with new strategies mid-combat to defeat foes such as Bruford and Dio.

Academically, Jonathan graduated from university after having written a celebrated thesis in archaeology.[22] He has meticulously studied the Stone Mask, going as far as identifying the spots in the brain it would pierce,[15] but didn't discover its true purpose himself.

In a fight, Jonathan is adept at thinking of moves on the spot and using the environment to his advantage. On several occasions, Jonathan was quick to formulate plans even in a moment of crisis. Still agonizing over the death of his father, Jonathan had to fight a vampirized Dio, and quickly thought about burning down the Joestar Mansion in order to cancel out Dio's regenerative abilities. Likewise, agonizing from a wound in the throat which also led to a lack of oxygen going to his brain, Jonathan managed to use his last Ripple on Wang Chan to dispose of a horde of zombies and Dio at the same time by controlling Wang Chan's body to make the boat explode. Jonathan even notably used his belt as a supplementary whip before ever acquiring the Ripple, as well exploited the fact that Windknight's Lot was a coal mining town to deduce that a lake would have air pockets at its bottom to surprise Bruford with an unexpected production of Ripple.

Jonathan has an arsenal of ancient martial art techniques, most inherited from Will A. Zeppeli and involving Ripple, at his disposal. Some are his original creation, each ending with "Overdrive".

Alongside the attacks, the Ripple has various other uses in combat. A skilled Ripple user such as Jonathan has the ability to walk on water, strengthen objects and increase their potency, increase jumping height, and much more.

One of the main conveniences of the Ripple is the ability to heal the body to an extent. During his battle with Doobie, Jonathan was able to eject poison out of his bloodstream via Ripple transfusion.[28] During his battle with Tarkus, he was also able to heal his broken neck after receiving the Supreme Pass Overdrive from Zeppeli.

Manga Debut: Chapter 122, The Thing on the Plane Along with the The World, it was stated that DIO's semi-precognitive abilities that seemed to have resulted from a Hermit Purple-like Stand were due to a Stand power that awoke in Jonathan's body.[30] Similar to Hermit Purple, it can produce a psychic photograph by smashing a camera, which DIO used to track the Joestars and their friends's current location to send Stand Users after them.

The brave and noble characters from Phantom Blood