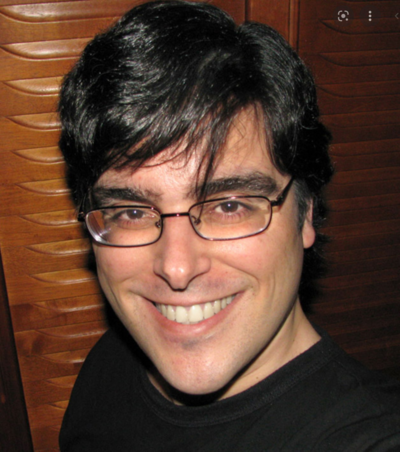 Guilherme Briggs is a Brazilian voice actor notable for voicing young Joseph Joestar in the Brazilian Portuguese dub of the anime adaptation of Battle Tendency.

He is also well known for voicing Buzz Lightyear in Toy Story, Superman from DC since the 90's, Yoda and Han Solo in Star Wars (he also voiced Yoda in the Latin Spanish dubs of The Last Jedi and The Rise of Skywalker), Hawk Moth in Miraculous: Tales of Ladybug & Cat Noir and Mickey Mouse from Disney since 2009.

Guilherme Briggs was born in 1970, in the city of Rio de Janeiro, to Suelly Neves and Henrique Briggs. During his childhood, Guilherme created characters and stories with his father on an old tape recorder, in a kind of home radio theater. Guilherme refers to his father as his great supporter of the arts.

On the occasion of the release of the movie Star Trek IV: The Journey Home, a friend of hers published a letter in a newspaper criticizing the dubbing of the production. Because of this, he was invited with his friend to visit the studio responsible for this dubbing, VTI Rio. Guilherme then learned that he could intern at the place, starting to work there later as a voice actor.

In 1991, he began his career as a voice actor at VTI Rio, and later went on to dub at other studios, and his first permanent character was Worf, from Star Trek: A Nova Geração. In cartoons, his first character was Eek, from Eek! The Cat. In 1994, he started working at Herbert Richers, led by Orlando Drummond, with whom he worked at VTI Rio, and in the same year he became the announcer for Cartoon Network Brasil and later did voiceovers for Som Livre and Rede Globo. With the death of the voice actor Alexandre Lippiani in 1997, Guilherme Briggs replaced him as the voice actor for Clark Kent in Lois & Clark: The New Adventures of Superman and in other productions with the character.