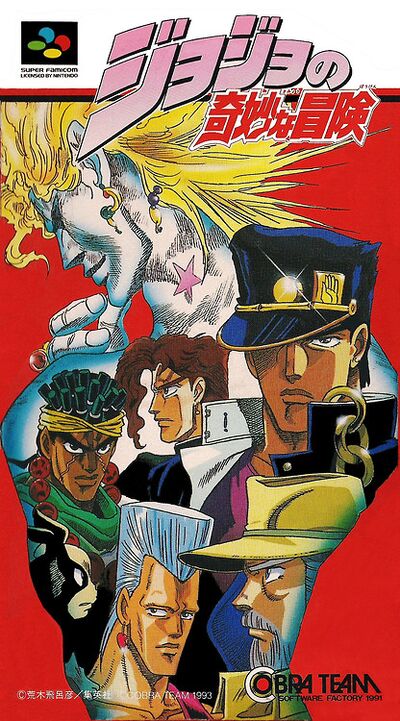 Just like in the story, the game features Jotaro Kujo and his companions traveling the world together and battling enemy Stand Users to reach DIO. Like most RPGs, the player manages the heroes of Stardust Crusaders who can level up as they fight and whose health (named HP) and mental state (named "mental points" or MP) must be taken care of. If either HP or MP reaches 0, then the character is down or is too discouraged to fight. The game's Biorhythm System (バイオリズムシステム, Baiorizumu Shisutemu) also modifies how well a character can fight depending on their state of mind such as stress. The characters can also buy, use or equip items.

The player can take the following actions when not in combat:

It is extremely easy to trigger a game-breaking bug. If, after opening the Status Menu (X button), any other button is pressed instead of closing out of the Menu (B button), the game will be stuck in the Status Menu. There is no way to close the menu at this point and the player must restart the game and load a previous save. This bug was present in the original Japanese cartridge of the game.

Prior to a battle, the player selects one of the face-down cards offered by DIO. These cards can either have beneficial effects on the party, such as restoring HP, or harmful effects, such as lowering defense.

The game uses a turn-based combat system. At the beginning of a turn, the player selects what actions each of the party's member must do and the turn unfolds. The enemy will usually attack the characters to reduce their HP, or "talk" at them to attempt to reduce their MP. A character's Stress level affects how susceptible they are to an enemy's demoralizing words; characters with lower Stress have a higher chance of resisting.

The player characters can take the following actions during a combat encounter: