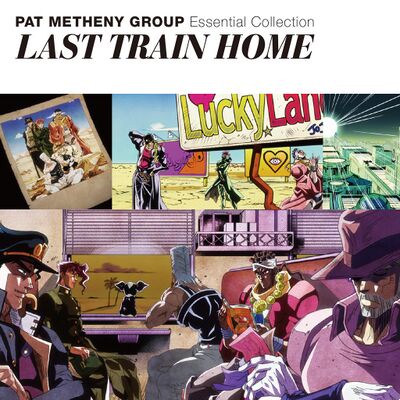 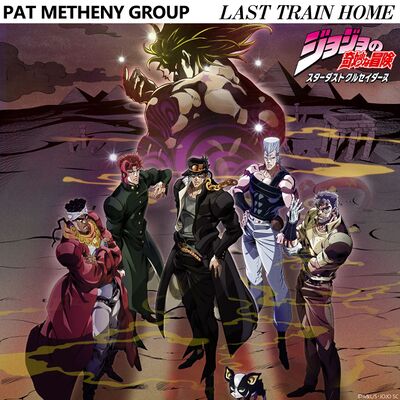 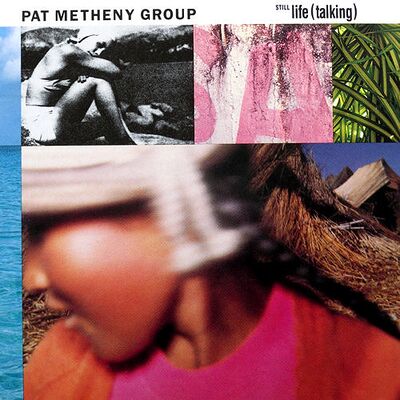 "Last Train Home" is an instrumental composition by the Pat Metheny Group from their 1987 album Still Life (Talking). It is used as the second ending theme for JoJo's Bizarre Adventure: Stardust Crusaders, specifically the second half of the anime.

Pat Metheny Group's first greatest hits album titled Essential Collection Last Train Home was released in Japan on March 4, 2015, featuring artwork from the ending credits of the anime on the cover.[1] The Last Train Home collection contains selections from the band's albums released by Geffen Records and Warner Bros. Records, spanning from 1987 to 2002, except from the 1996 album Quartet.

The ending opens with a slow fade-in from black, depicting the deserts of Egypt at night. As the screen scrolls horizontally, the skies over Egypt continuously transition from night to day. Several billboards and street signs are shown along with images of various characters.

The camera then pans out to reveal the Joestar group quietly enjoying a train ride, Polnareff and Iggy look out of the window as Kakyoin smiles at them. Avdol is reading a book as Jotaro smiles at his sleeping grandfather, Joseph, who is holding three train tickets.

The scene then continues scrolling to reveal the characters amidst Egyptian ruins. Looking out across a small body of water connected by a bridge, Jotaro, Joseph, and Polnareff are shown smiling at Avdol, Kakyoin, and Iggy; who are gathered around a campfire on the other side. This possibly references the fates of the Crusaders by the time the adventure ends.

With the sun shining brightly in the sky, the wind erases Jotaro's footsteps as he gazes out at the city of Cairo before walking away. The screen fades to a Polaroid photograph lying on a patch of dry, cracked earth. A gust of wind causes the photo to blow away as another fade occurs. This reveals the photograph to be the group photo the Crusaders took upon finally reaching Egypt.