Breathing
“
My heart is burning with the heat of a raging fire! Feel the pounding beat of my pulse! SUNLIGHT YELLOW OVERDRIVE!
”
—Jonathan Joestar, Tarkus and the Dark Knight Bruford, Part 4

The Ripple (波紋, Hamon), is an energy used in the ancient form of martial arts, Sendō (仙道, lit. "Way of The Hermit/Wizard").

Through self-controlled respiration, a trained person can produce an energy manifesting as ripples throughout their body and that is identical to the energy of the Sun, in polar opposition to the energy exerted by Vampires, Zombies and the Pillar Men.

Ripple is the main source of power for the heroes of Phantom Blood and Battle Tendency. It is also briefly featured in Stardust Crusaders.

Zeppeli creating a Ripple by breathing

The Ripple is an energy identical to the Sun's rays, which the human body can produce through controlled breathing, having the effect of producing ripples of energy propagating from the bloodstream to the rest of the body and other objects in contact with it. The Ripple manifests itself as electricity-like sparks, and it can be seen by ordinary humans.

The Ripple can also affect non-living things. An object charged with Ripple energy will have one or several attributes enhanced by the energy, making it a more effective tool, or weapon. Liquids conduct the Ripple especially well (and the user's Ripple shows on liquids as actual ripples). It is mentioned by Joseph that objects covered in oil can conduct Ripple much easier. However while all materials can conduct the Ripple more or less well, inorganic material such as metal cannot store the energy, which simply passes through. Joseph was also shown to be able to channel the Ripple through his own Stand. It is unknown if a humanoid Stand like Star Platinum, belonging to his grandson Jotaro, could do the same.

Anybody can technically produce the Ripple. However, Will Anthonio Zeppeli explains that only one in ten thousand has the ability to be a Ripple user in practice. In effect, only a few people have the willpower and therefore the discipline to breathe correctly: those notably who have lived through great tragedies and yet have kept their fortitude like Jonathan Joestar.[1] However, the ability to use the Ripple is also a talent granted to people whose ancestors were once Ripple users. Thus Joseph Joestar had a natural affinity for the Ripple without being really proficient.[2]

Due to its identical nature to the positive energy of the Sun, the Ripple's primary uses are to heal various wounds or ailments, and combat creatures such as vampires or zombies.

Living organisms can be affected by Ripple attacks, but are not automatically hurt by it. For instance, Will A. Zeppeli healed Jonathan Joestar's broken arm while Caesar Zeppeli used his Ripple to control a woman into fighting Joseph, and Joseph's trained Ripple would have caused an ordinary person to experience a pins and needles-feeling before fainting - similar in nature to symptoms experienced after prolonged exposure to the sun's rays. Kars' Ripple energy, boasting several hundred times Joseph's power, caused Joseph's flesh to nearly instantly melt.[3] Ripple is transferable between people, as both Will A. Zeppeli and his grandson Caesar transferred their Ripple to the protagonists they were aiding shortly before their deaths. Ripple users can reject harmful substances inside of them by ejecting it from their bloodstream with the use of Ripple energy.

Producing the Ripple also preserves the user's vitality, making them look more youthful and be more energetic even during old age although this method has limits.

To produce an optimized Ripple, users must precisely control the energy produced by the breathing. It typically requires focusing the energy before unleashing it all at once to create a powerful burst of Ripple.

The Ripple makes anything into a weapon

By imbuing any object with the Ripple, a Ripple user can perform several techniques that can combine with the warrior's own tactics, to allow for a very flexible fighting style. Because of its versatile nature, many warriors use different weapons ranging from a scarf, soap bubbles, wine, or clackers. Many of the most powerful techniques are classified as "Overdrives" (, Ōbādoraibu, lit. "Ripple Dash/Sprint"), and are often color named for the medium they're used with (Metal Silver being one to transmit through a sword). An object that is impacted with the force of the Overdrive will carry Ripple energy through it, and will become lethal to a vampire's touch. This can be used to strike an enemy in another room by breaking through a wall and causing its solar energy to disintegrate the target.

Merely producing a light amount of Ripple requires the user to breathe a precise way. Thus to not only enhance the ability to produce it, and efficiently wield it in battle, the Ripple user must undergo training and exercise his ability.

Ripple users undergo harsh physical training to increase their breathing ability and thus the amount and power of the Ripple they produce. Although the training is explained as being focused on the rhythm of the breathing, which will positively impact on the whole body, it doesn't stop a master from using physical exercise, like prolonged swimming, or forcing a student to stay balanced on the tip of the finger.[4] Harsh masters have also designed lethal training regimens like the Hell Climb Pillar which puts students in a life or death situation to push them to overcome their limits.[5]

Those who want to fight with the Ripple also typically undergo martial arts training to acquire battle experience and fighting skills that will be enhanced by the Ripple. Will Zeppeli and Jonathan Joestar thus have trained to use the Sendō alongside the Ripple. However, other Ripple users like Joseph prefer to use tools with the Ripple, and Caesar Zeppeli has an unrefined fighting skill honed by years of delinquency.

While the Ripple Users can become dangerously powerful and turn the most mundane of objects into lethal weapons, they are not without significant weaknesses.

A Ripple user must be able to constantly breathe: if this breathing is stopped or reduced due to injury or other conditions, they slowly grow weaker and lose the ability to create more Ripple energy, to the point that they can be easily defeated - even by a mere zombie. This weakness was exploited by many Vampires - notably when Dio mortally injured Jonathan, piercing his trachea and in the process preventing him from using the Ripple. Similarly, Ripple energy needs a strong flow of the user's blood to be used with any great strength. Dio had discovered that he could flash-freeze a Ripple user in seconds (he even claimed to be able to freeze Jonathan whole in just two seconds), causing their blood to flow slowly to an eventual stop, making them unable to attack as rapidly or disabling them outright. Additionally, Wamuu remarked that Caesar's heavy blood loss prevented him from using the Ripple.

The Ripple also appears ineffective when removing an object from the User's body if said object is made of the User's own flesh, as demonstrated by Joseph Joestar during the Empress story arc of Stardust Crusaders. 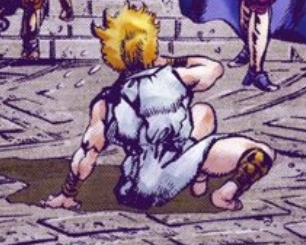 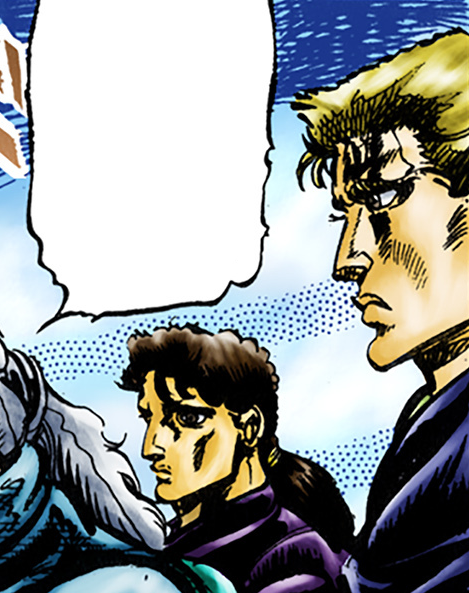 Note: Due to the versatility of the Ripple and the near-universal ways of deploying it, there are very few shared techniques between Ripple users. Many of the techniques listed here are exclusive to individuals and do not represent the full spectrum available. 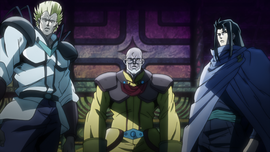 According to Will Anthonio Zeppeli, only one in ten thousand bears the aptitude capable of utilizing Ripple, and the main characteristic of driving Ripple comes from the pressure one has felt through harsh situations in life. Those who are not capable will still be able to use Ripple, but only to an insignificant extent.[6]

Ripple seems to have been created at the dawn of humanity with the purpose of fighting off the Pillar Men's influence on the world along with the vampires and zombies created with their Stone Masks, and stopping them from ever achieving perfection through the Red Stone of Aja. Ripple users have built many devices and temples across the world to help them train and learn from one another.

In the Steel Ball Run canon, a power called the Spin (回転, Kaiten) is introduced, similar in a few notable ways to Ripple; as part of a series of parallels to concepts native to the original canon.

Channeled by Gyro Zeppeli with special Steel Balls and by Johnny Joestar with a Stand power that spins his nails, the Spin enables a range of effects on the environment and the body.