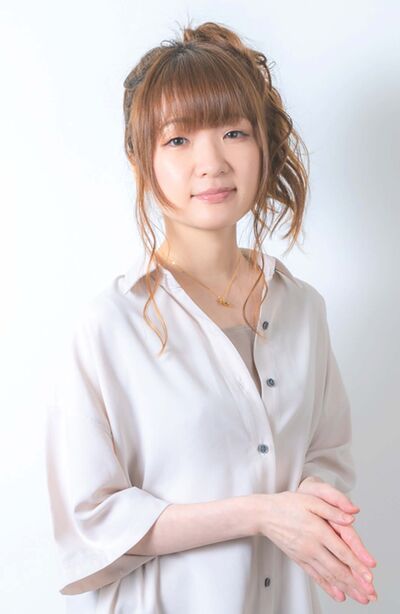 She is also well known for her roles as Asako Natsumi in My Little Monster, Lisa Mishima in Terror in Resonance, Chise Hatori in The Ancient Magus' Bride, Juno in Beastars, Arisa Uotani in Fruits Basket (2019), Dai in Dragon Quest: The Adventure of Dai, and Anya Forger in Spy × Family.

Tanezaki was originally planning on becoming an actress but became interested in voice acting while watching Sailor Moon, particularly becoming fascinated in the occupation after watching episode 45 of the series. Around that time, she started recording her voice in cassette tapes. One day she met Junko Iwao at a concert. After Tanezaki mentioned wanting to become a voice actor, Iwao told her that she hopes they can co-star someday.

After graduating from high school in Oita Prefecture, she moved to Tokyo alone and started working immediately in part-time jobs so she could save money to enter a voice actor training school.

Tanezaki admires Miyuki Sawashiro and Mayumi Tanaka, and was inspired by Tanaka's role as Pazu in the film Castle in the Sky.

Tanezaki made her debut as a voice actor playing the character Asako Natsume in My Little Monster, although she had also auditioned as Shizuku Mizutani. She mentions wanting to play the role of a boy because one of the reasons she aimed to become a voice actor was that she thought it was fascinating that voice actors could play characters of different genders.[4] In 2020, she eventually earned her first major role as a male protagonist as Dai in Dragon Quest: The Adventure of Dai. Tanezaki is currently affiliated with the Japanese talent management agency Haikyo.

Tanezaki has read all of the Stone Ocean manga. The character she was most drawn to was Emporio, so she was really happy and honored when she got chosen to play him. She was ecstatic as she never expected to be part of the JoJo's Bizarre Adventure series. She stated that her goals are to do her best to keep up with Fairouz Ai and support Jolyne as her character.[5]