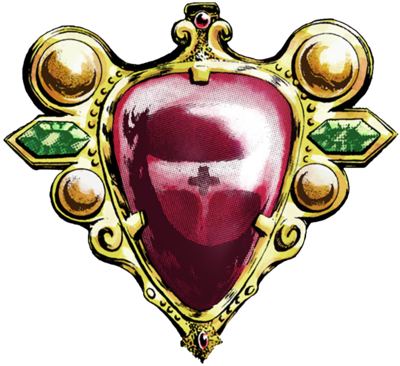 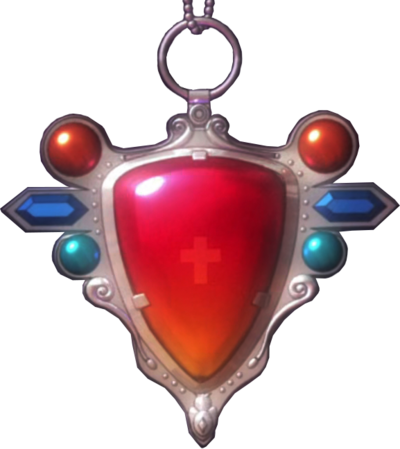 Unknown, possibly lost in the eruption caused by Joseph Joestar

The Red Stone of Aja (エイジャの赤石, Eija no Sekiseki), also known as the Super Aja (スーパーエイジャ, Supā Eija), is a perfect gemstone sought by the Pillar Men, and the main plot device for Battle Tendency.

The stone can absorb and refract light one million times, causing it to emit a laser-like beam. Combined with the Stone Mask, it would unlock a Pillar Man's full potential, removing all weaknesses, including the inability to withstand sunlight and the Ripple.

About 2,000 years ago, this perfect stone was in possession of an unnamed Roman Emperor.[4] Kars, Esidisi, and Wamuu pursued it, and although successful in wiping out the entire Ripple clan at the time, they were ultimately unable to obtain it and were put to sleep inside a stone wall.[5] The circumstances under their failure to retrieve it are unknown.

During their sleep, the Ripple users could not destroy the stone to prevent the Pillar Men from obtaining it, due to a legend passed down among Ripple users, warning that destroying the stone would cause the opposite and instead make defeating the Pillar Men even more difficult.[6]

The Stone was passed down among many generations of Ripple users, presumably through the leader of each clan. It eventually ended up in the possession of Master Straizo, (implying that Tonpetty may have had it at some point), who gave it to Lisa Lisa before his death during the events of Battle Tendency.[7] 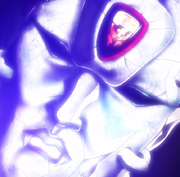 Esidisi manages to locate the stone and, after his initial defeat, is able to ship it to Switzerland. Before the stone can cross the border however, it is confiscated by the German Army, or more specifically Colonel Rudol von Stroheim. During his and Joseph's encounter with Kars, the red stone goes sliding off a cliff, but Joseph is able to retrieve it after some struggle. Lisa Lisa then hides the stone somewhere in Switzerland before she and Joseph confront the Pillar Men in Kars's fortress. After threatening to blow up the stone with a time bomb, Lisa Lisa forms an agreement to fight with the Pillar Men one-on-one. Joseph is sent back to the hotel where he finds the stone in Lisa Lisa's luggage and sets off to the Skeleton Heel Stone.

At the climax of Part 2, Kars was able to claim the Red Stone of Aja by tricking Lisa Lisa during their fight. He combined the Stone with his customized Stone Mask just as the heroes unleashed a barrage of UV light, enabling him to become the Ultimate Thing. Following his transformation, the Stone fell from Kars's broken mask, and Joseph Joestar grabbed it before running away. Later, Joseph instinctively holds up the Stone to intercept Kars's final attack, amplifying the villain's Ripple several times over into a beam that the Stone fired into the volcano beneath them. This causes the volcano to erupt and blast Kars into space. The whereabouts of the Stone afterwards are unknown.

The Red Stone appears as one of Young Joseph's super moves in Heritage for the Future.

It appears as Joseph's Ultimate Hero Burst in J-Stars Victory Vs. He uses it in the same way seen in Heritage for the Future.

The Red Stone appears as the main collectable item in one mission of JoJo's Bizarre Adventure World in Jump Ultimate Stars.

The Red Stone appears as both Lisa Lisa's HHA (similar to Joseph's special move in Heritage for the Future) and the item that allows Pillar Men and Vampire characters to fight on stages that contain sunlight in All-Star Battle.

It appears as the finishing part of Joseph's and Lisa Lisa's DHA in Eyes of Heaven, functioning similarly to Joseph's special move in Heritage for the Future.

The Red Stone of Aja was obtainable for a limited time as an assist in the mobile game Puzzle & Dragons. 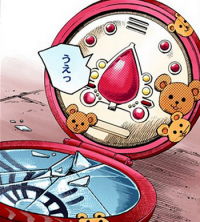