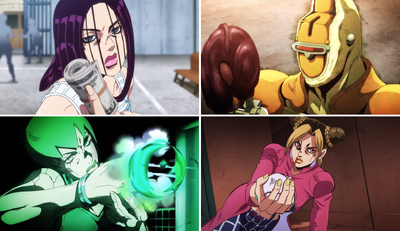 Marilyn Manson, the Debt Collector (取り立て人マリリン・マンソン, Toritatenin Maririn Manson)[2] is the ninth episode of Stone Ocean and the one-hundred-sixty-first episode of the JoJo's Bizarre Adventure anime. The episode covers Chapter 34 to Chapter 39 of the original manga.

Whitesnake's user, Enrico Pucci, makes his entrance. A baseball game in the courtyard heats up when F.F. and Stone Free get involved.

During a confession, a prisoner named Miraschon confesses her mischievous habits to Father Pucci, who seems to be unperturbed by her words. When she asks her assistance for her parole, Pucci asks her the difference between a man and an animal, then shows her a cherry stem with its pits still connected. However, Miraschon continues to press about her parole. Pucci says there might be a way through a recommendation, but before she can thank him, he slams her face into the table. Admitting that he quite likes her habit of theft, Pucci inserts a Stand DISC into the incapacitated Miraschon.

At the prison courtyard, Ermes questions Jolyne's trust in F.F. for letting her hide Jotaro's Stand DISC herself. Jolyne responds that she trusts F.F., and that Whitesnake knows nothing of her betrayal. F.F., preoccupied in a game of baseball, invites them to play with her until a bully prisoner threatens to drink from her cup. F.F. responds to the situation by shooting a black substance into the prisoner's mouth, forcing her to her to vomit even more water into the cup. The game of catch resumes.

Later, F.F. informs Jolyne that they have tossed the ball 86 times without dropping. Miraschon overhears them from nearby, introducing herself as prisoner FE26789, and bets 100 dollars that they will not be able to reach 100 tosses. F.F. is confident that they can reach it with only 13 throws left, but Jolyne says that she does not have 100 dollars to wager. However, Ermes tells her to accept the bet, knowing that Miraschon is a petty thief. Suspecting that the wager is Whitesnake's trap, Jolyne nonetheless accepts under the condition that Miraschon cannot raise her voice nor approach them. For their part, Jolyne and F.F. must stay at least three meters away from each other, and are only given ten seconds to throw the ball.

At the 89th throw, Miraschon distracts F.F. by sitting near her water cup. Although Ermes holds her cup for her, they narrowly reach the 100th throw at the last second. Winning the bet, they ask Miraschon to hand over 200 dollars - after betting from both Ermes and F.F. - but she wagers a thousand dollars if the group can reach 100 more throws. Jolyne refuses to play due to her gut feeling, but Ermes accepts the challenge in her stead. As the sun sets during the 32nd toss, a guard warns them to stop playing. Ermes slips in 100 dollars to let them continue playing for three more minutes, but the guard insists that 100 dollars can only pay for the ball and takes away the glove. In the commotion to catch the ball, Ermes accidentally violates the rules, causing the debt collecting Marilyn Manson to appear. Marilyn Manson grabs Ermes, takes the money sewed in her breast, and - with 590 dollars left to collect - extracts Ermes's liver with plans to sell it on the black market.

F.F. shoots Miraschon in the dark

Realizing that Miraschon and Marilyn Manson intend to lure her into wagering her father's Stand DISC, Jolyne makes another bet with Miraschon: if she can reach 1000 tosses, Miraschon must return everything she took from Ermes. Unable to remain in the courtyard after sundown, Jolyne and F.F. toss the ball while running inside the prison, planning to chase Miraschon and put her out of commission. The two chase Miraschon to one of the prison's bathrooms, where she turns off the lights just as Jolyne throws the ball to F.F. Fortunately, she catches it in time with her plankton, and shoots in the direction of Miraschon's voice to injure her arm and turn on the lights. Jolyne finally corners Miraschon in an elevator with Stone Free. Jolyne takes the opportunity to ask her about Whitesnake, but Miraschon pleads that she only wanted her parole before quickly pressing one of the elevator's buttons, causing the elevator to close its doors and ascend. F.F. forces the doors open with her plankton and tosses the ball to Jolyne, who prepares to throw the ball back on the second floor. However, as she does so, the guard from the courtyard catches the ball, revealing that Miraschon herself asked him to do so. Having seemingly failed, Jolyne is immobilized by Marilyn Manson as it takes both her most expensive organ and her father's DISC.

Miraschon lies defeated as the group obtains their reward

Suddenly, Jolyne reveals the baseball in her hand, having unwrapped and retrieved the baseball with Stone Free's strings. As Jolyne's partner was never explicitly stated, Marilyn Manson returns what it has taken and vanishes. Unsure of how many throws she has remaining, Jolyne delivers a thousand back-and-forth blows to Miraschon, putting her out of commission and allowing Jolyne, Ermes, and F.F. to collect the money she owes them. As Miraschon's memory and Stand DISCs eject from her head, Jolyne repeats her determination to obtain both of Jotaro's DISCs and save her father.