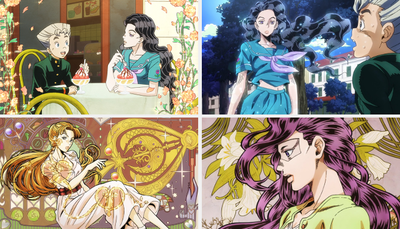 In the streets, Yukako coincidentally meets Koichi, who wishes to put aside their past fight and make peace, to Yukako's joy. Koichi is enthralled by Yukako's change in appearance and can hardly look at her. Although Koichi and Yukako go as far as touching each other's hand, the time limit has passed. Koichi begins to have stomachaches and runs away. Dismayed, Yukako rushes back to Aya's salon and demands to be upgraded further. Aya accepts to modify Yukako's whole body, but drawing a parallel with the story of Cinderella, warns her that she would need to use a special lipstick every 30 minutes from now on. Yukako accepts. Meanwhile, Koichi suddenly feels better, and noticing that he is holding Yukako's bag, runs back to give it to her. When he sees Yukako, Koichi's heart is enthralled by her beauty. However, Rohan Kishibe appears and pressures him into following him. Yukako, who pictured both of them having an intimate moment, is taken aback. Finally, events conspire to make them hug each other; Yukako and Koichi share a passionate kiss as the time limit of 30 minutes passes.

Several days later, Koichi finds it strange that after their kiss, Yukako never contacted him again. In the streets, he sees a woman resembling Yukako, but the hideous woman denies being her. However, it is indeed Yukako, who then crashes Aya's salon, ordering her to fix her face. However, Aya reveals that Yukako's face is gone forever and her features begin to progressively disappear as a result of tampering with Fate. Koichi suddenly enters the salon, having recognized Yukako by her personality alone. Impressed, Aya decides to give Yukako a second chance and spawns several faces, saying that she can choose whichever feels like hers, but choosing incorrectly would make her incredibly ugly forever.

“
Here's another episode that I particularly enjoy. Much like episode 16, I would have liked to handle the storyboard myself, but it was impossible with my schedule. Therefore, Jiro Fujimoto helped me out while also doing the directing. That said, the parts largely inspired by Alphonse Mucha were still directed by me.