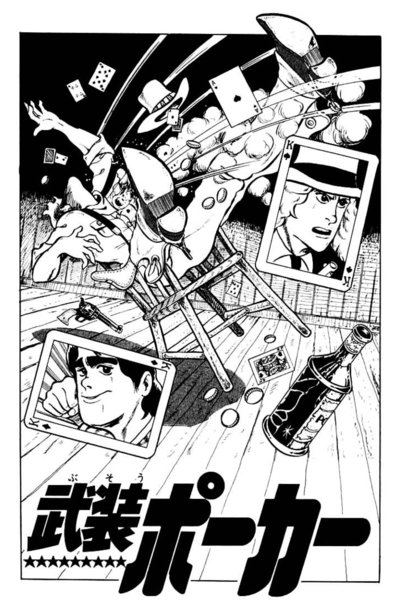 Poker Under Arms (武装ポーカー, Busō Pōkā) is a Japanese shōnen manga one-shot written and illustrated by Hirohiko Araki. Having been a "Selected Work" runner-up at the Tezuka Awards, this Wild West one-shot was Araki's first published work and his official debut as a manga artist.

The one-shot is included alongside Araki's other early works in the volumization of Araki's manga, Gorgeous Irene.

A Western set in a town without laws. The story begins with a wealthy old man telling his accounts of a dangerous poker game between gunmen.

Don Peckinpah (ドン・ペキンパー, Don pekinpā) is an infamous gunman with a bounty of $10,000 on his head, making him a constant target for bounty hunters looking for fame and riches. He is often described as being the devil, due to his malicious yet calm nature. At the start of the story, Peckinpah has just killed his latest victim, a bounty hunter who tried to ambush him at the barbershop. Peckinpah is impressed by the cleverness of the ploy but states that it wasn't enough because he is smarter and a faster draw.

After leaving the barber, Peckinpah enters a bar and orders a drink. At the bar, he overhears a group of poker players and asks if he can join them. One of the players, Mike Harper (マイク・ハーパー, Maiku hāpā) is an equally skilled gunman with also bounty of $10,000 who's just arrived in town. To show off, Peckinpah takes four cards and flicks them into the deck to push out the four aces. Not to be outdone, Harper then mixes the deck so that the four aces end up at the top, scaring the other players away. The two gunmen agree to play one-on-one.

Mike Harper quickly reveals himself to be the better player and keeps winning. Frustrated by his losing streak, Peckinpah takes out his anger on a drunken old bum interrupting the game. Regaining his composure, Peckinpah devilishly suggests that they bet their guns to make the game more interesting, which would the loser defenceless against anyone wanting to claim their bounties. Unaware of the bluff, Mike Harper reluctantly agrees. Peckinpah secretly switches his cards and reveals his hand, four of a kind in queens. Unfortunately, Harper has also cheated and also has four queens. When the bum points this, out, Peckinpah and Harper throw the table and draw. At this moment, the old bum throws a molotov cocktail at the two gunmen, killing both.

And so the old rich man's story ends. The old man's girlfriend appears to remind him they have to go back him. The woman also mentions seeing him in the newspapers having killed two criminals and saying that being a sheriff must be hard, revealing the old man's true identity.

Author's Note
“
I was so excited when I heard that my work was going to be published that I wrote several diary entries about it!
”
—Hirohiko Araki
“
自分の作品がのるときいて感激のあまり日記を書きまくった！（81年１号）
”
—Hirohiko Araki
Author's Note
“
Poker Under Arms
My debut work. When I drew it, I hoped to take it to my editor's office and have him want to read it to the very end, without ceasing to flip the pages and putting down the work. The reason why it's 31 pages long is that at the time, it was decided that story manga should be cut down to that number of pages. I drew around a hundred pages in total, redrew it again up to page 31, reworked the material, and brought it into my editor's office. It was then submitted to the Tezuka Awards committee. I chose to make it a Western because I loved Clint Eastwood.
”
—Hirohiko Araki
“
『武装ポーカー』
デビュー作。とにかく作品持ち込みで編集者をラストベージまで “読ませたい“ と思ったし、途中でページをめくるのをやめて見捨てたりしないでください…と願って描いた。
31ページというのは当時、ストーリーマンガはこのページ数で投稿すると決まっていたため。全部で100ページくらいをとにかく描き、そして31ページまでもう一回描き、ネリ直して編集部へ持っていった。手塚賞にまわされた。西部劇にしたのはクリント・イーストウッドが大好きだったから。
”
—Hirohiko Araki

In his book Hirohiko Araki's Manga Technique, Araki explains how he's designed his one-shot to be as appealing as possible.

To start the story, Araki eschewed directly introducing his protagonists and instead used the character of the old man as a mysterious narrator. Araki then purposefully introduced Don Peckinpah in the second page in the barbershop to show the reader that he was a formidable gunman and a guy tough enough to be able to care about his appearance in the midst of a dangerous gunfight. Araki also decided to have Don Peckinpah gun down someone in an unusual place (the barbershop) to show the readers that the setting wasn't a normal town.

This one-shot has been created in order to be presented at the 1981 20th Tezuka Awards and won the "Selected Work" runner-up distinction, meaning that none of the works have technically won this year, but Araki's one-shot still drew the attention of the judges.