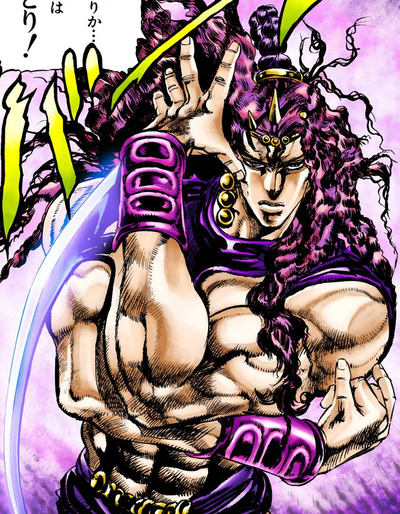 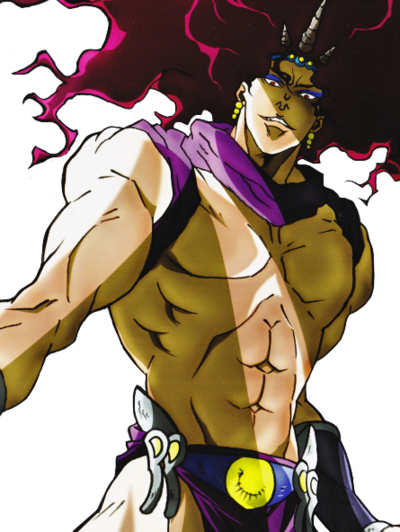 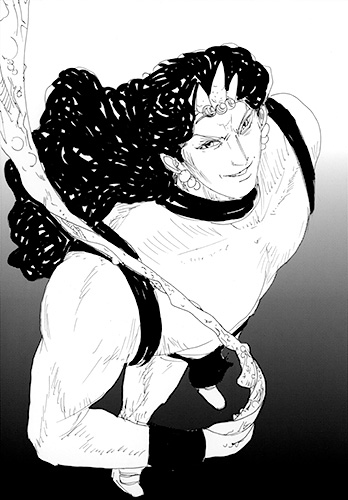 Initially, he appears to be the most aloof and no-nonsense of the Pillar Men, rarely smiling and often being the one to remind Wamuu and Esidisi of their goal.[5] Kars is utterly devoted to obtaining the Red Stone of Aja, and tramples over anyone in his way, no matter the method. Though he entertains Joseph's initial challenge, and later Lisa Lisa's. In Kars's mind the only thing that matters is the final victory. He still has some level of respect for bravery, but ultimately his philosophy is to never leave anything to chance.[6] He breaks his word about fighting for the Stone fair and square, cheating to defeat Lisa Lisa and has been revealed to execute children, anticipating their revenge.[7] Though he vows to avenge his companions, he found Wamuu's warrior spirit to be a weakness. Kars will fight for his companion's memory but his priority will always be attaining absolute power by any means necessary.[8] 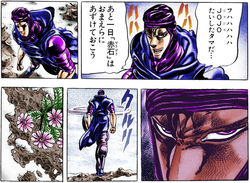 Kars is observant, methodical and boasts an incredible intelligence accustomed to trickery. His first battle against Joseph demonstrates a great deal of relentlessness in trying to obtain the Stone as the Pillar Man answers Joseph's every trick calmly with moves of his own.[9] Unaffected by setbacks such as when he peacefully accepted that Joseph stole the Stone from under his nose,[10] he will relentlessly struggle to win through the direst situation. Only when does he find himself in space, unable to move despite repeated attempts to do so, and drifting away from Earth does he lose his composure and hope.[11] Nonetheless, his obsession with the Aja Stone is an easily exploitable weakness as Kars prefers to take no chance in losing it. Thus it has been used as a shield and leverage by his enemies with ease.[10][12] 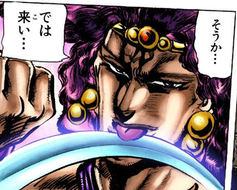 Despite his stern, no-nonsense exterior, Kars possesses a murderous and sadistic nature. He has stated that a life without an enemy is boring[5] and has shown to enjoy fights occasionally. However, he only really derives pleasure from inflicting harm and hearing the cries of his victims.[13] Kars enjoys the desperation, and often licks his lips in anticipation of their demise. Kars also comes across as mockingly polite, as he offered Lisa Lisa poison in order to die on her own terms rather than fighting him.[14] These tendencies become more clear when he attains his ultimate form, and he is seen to thoroughly enjoy his status as the most powerful life form on Earth.[15] 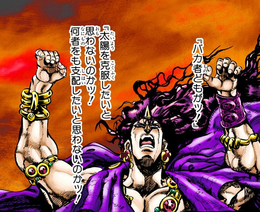 Kars reveals himself to be a power-hungry Pillar Man, fixated on controlling the full potential of his body and the idea of resting "at the top".[7] When he discovered that the Pillar Men's brains held untapped potential, much like humans, Kars wanted to control it. That obsession made him build the Stone Masks to unlock his hidden abilities; when that failed to meet his expectations, he sought out the Red Stone of Aja to complete his transformation into an Ultimate Thing. He was enraged when the rest of his tribe refused to "conquer the sun" as he wished, believing that they should use their innate power to the fullest and rule over all life; however, he either ignored or failed to consider the fact that the increased hunger brought on by the Stone Mask's power would cause his race to exterminate all life on Earth.[16] When Kars transforms into Ultimate Thing, he is enamored by the sun, brazenly standing in its light and prided with the conquest of his only natural foe.[17]

Kars keeps an ambiguous relationship toward those around him. On one hand, he considered Santana to be nothing but a simple guard dog,[18] and slaughtered the rest of his race (including his parents) without hesitation or remorse.[16] On the other hand, he expresses himself to care deeply for Esidisi and Wamuu,[19] repeatedly vowing to achieve his goals and kill Joseph Joestar to honor and avenge their sacrifices in ensuring his success.[18][15] Kars also seems to have a certain respect for nature and animals; he caused a drunk driver who nearly hit a puppy to get into an accident and die,[20] and he deliberately complicated an otherwise-simple landing to avoid falling on a flower.[10] However, he does later attack a squirrel when testing his Ultimate Form's abilities,[15] and is said to have threatened an entire ecosystem fueling his Stone Masks. Ultimately, Kars is capable of affection and forming bonds with others, but those affections always come second to his goals.

Kars looks down on machines, sneering at the cyborg technology Rudol von Stroheim demonstrates and considering it inferior.[18] Moreover, he considers his Vampire grunts to be worthless pawns, unmoved if they are victimized or slain, and willing to execute them himself should they prove annoying to him.[7]

As the Ultimate Thing

In his Ultimate Form, Kars is able to use the Ripple, but at a level that is hundreds of times stronger than Joseph's. According to Stroheim, Kars's Ripple is comparable to the intensity of the Sun itself,[16] and it can literally melt and vaporize human flesh on contact. 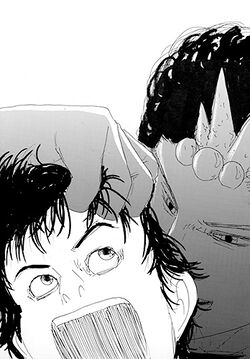 In the novel JORGE JOESTAR, Kars expresses a higher skill of biology manipulation of not only himself but other beings:

Esidisi: Kars appeared to care for his comrade, being the only Pillar Men of his generation to agree with his ideals. He trusted him to investigate a lead on the Red Stone of Aja alone, and immediately went to Switzerland himself when he realized that something must have happened to Esidisi. Upon learning that Joseph had killed Esidisi in order to keep him from the stone, Kars vowed to kill him after completing his primary objective - and he meant it, as the first thing he did after testing his Ultimate abilities was to attack Joseph.

Joseph Joestar: As the man who created the stone masks, Kars is essentially responsible for Dio Brando's transformation and the death of Jonathan Joestar. Initially, Kars was just one of the Pillar Men to defeat in Joseph's eyes, but after Joseph killed Esidisi, Kars voiced a deep-seated hatred for the human above all Ripple users. Kars would win Joseph's ire as well by revealing how dishonorable he is compared to the others. It was only once Kars became the Ultimate Thing that he indulged himself in attacking Joseph who made great efforts in order to defeat him. Kars responded by cutting off Joseph's arm and it ended in Joseph unintentionally sending Kars out into space, but not before mocking him one last time.

Araki compares the roles of the Pillar Men to the Japanese historical drama Mito Komon. Kars is similar to the protagonist Mito Komon, a prominent daimyo in the early Edo period. Esidisi and Wamuu are similar to his retainers, Suke-san and Kaku-san, respectively. Araki was inspired by their hierarchy when drawing their poses.[4]

Kars's blades are based on Ikuro Hashizawa's Reskiniharden Saber Phenomenon in Baoh the Visitor, another manga by Hirohiko Araki. Kars's quest to become the epitome of biological evolution is also similar to the goal of the Dress Organization in Baoh.[4]

Araki drew the final scene of Kars with the intention of him never returning, stating that unless Kars developed a compass ability or crash-landed on another civilization, he'll remain in space forever.[4]