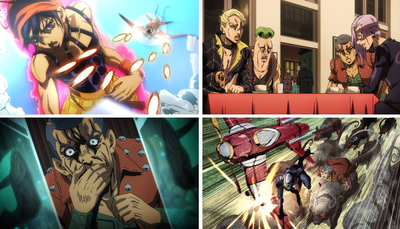 The Hitman Team (チーム, Hittoman Chīmu)[1] is the tenth episode of Golden Wind and the one hundred twenty third episode of the JoJo's Bizarre Adventure anime. The episode covers from Chapter 472 to Chapter 474 of the original manga with parts of Chapter 475.

Narancia is attacked by the assassin Formaggio, whose Little Feet causes Narancia to slowly shrink. Formaggio must hide from Narancia, who somehow manages to track him.

Losing Formaggio out of his sight, Narancia notices his surroundings becoming bigger

A short recap of the last episode narrates Formaggio's confrontation with Narancia Ghirga. In the now, Narancia calms himself and finally notices that the shoe and knife that he's lost have become bigger than usual and so did his surroundings. Meanwhile, Formaggio is still hiding inside Narancia's dress pocket. Back at the hiding place, Fugo worries that Narancia is taking too much time.

Aerosmith pursues Formaggio in the sewers

Narancia understands that he is slowly shrinking and thus rushes to a nearby hall to use the phones inside. Because of his light weight, he is temporarily blocked by the automatic doors but uses Aerosmith to break the doors and pierce the payphones for their coins. To prevent Narancia from reaching his allies, Formaggio summons Little Feet to cut the phone's wire but Narancia understands that his enemy is nearby. Trying to hide at the bottom of the pocket, Formaggio is mysteriously detected by the boy, who squeezes him into his hand and shows him to Aerosmith to be shot at. Formaggio escapes out of Narancia's fist by returning a pen to its normal size, the sudden change propelling him out. Still, Aerosmith effortlessly tracks Formaggio despite his best efforts. Falling into a sewer but still being tracked even underwater, Formaggio weights his options while defending from Aerosmith's bullets.

A flashback reveals a meeting Formaggio had with some of his partners from La Squadra Esecuzioni while assassinating a target by making him unwittingly drink a shrunken car and then grow it back inside his stomach. After the deed was done, the team gathered to share their meager payment but noticed that two of their teammates, Sorbet and Gelato, had disappeared. Indeed, compared to the lucrative drug traffic and gambling other teams controlled, the Hitman team only received money through payments for assassinations and that frustrated them, to the point Sorbet and Gelato decided to look into The Boss' past. They spent time searching for the two but couldn't find any clue until Formaggio found Gelato's corpse, choked with a rag. The team then began to receive strange pieces encased in formalin. Putting them together, La Squadra realized with horror that The Boss had had Sorbet cut into pieces by Cioccolata and sent his corpse to the team as a well-orchestrated demonstration of his might while Gelato choked himself with his own gag. Burying their comrades, the team then despaired to ever overthrow The Boss, until news of Trish fell into their ears.

In the now, Formaggio is still under attack, but noticing that Aerosmith has also needlessly attacked some rats, he understands that Aerosmith detects life forms through the carbon dioxide they release. Formaggio hides inside a swarm of rats whom he scatters and even wounds Aerosmith, but Narancia deduces that one rat breathing more heavily than the others must be carrying Formaggio and shoots. Formaggio is hit but it is too late: the assassin grows back into his normal size while Narancia has shrunk with his Stand, becoming too weak.