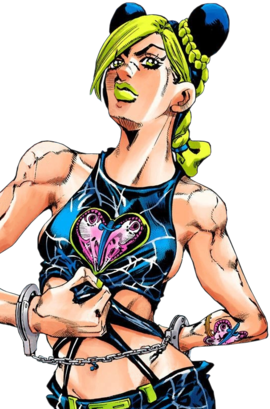 JoJo (by her mother) 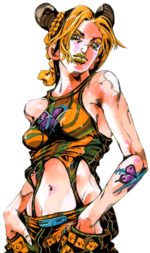 Flighty, abrupt, and snappy with her elders, Jolyne in her teenage years was easily considered a delinquent and lost cause. Bitter at Jotaro for being absent from her life, she tried multiple times to catch her father's attention by committing multiple minor crimes and went to jail several times for them. Because of her father's absence, Jolyne was said to be dependent on the affection and approval of those around her,[10] and she was ready to cover Romeo's accident, resulting in her being sentenced to 15 years in prison for it.[3]

Jolyne retains her confrontational attitude throughout the story. A former delinquent living in a maximum security prison, Jolyne had to toughen up and can be especially rude. She frequently taunts enemies. She also advocates aggressively asserting herself, especially in the prison, and once told F.F. to violently confront an inmate who cut in the queue for buying their lunch.[12] Jolyne is particularly violent in her fights; she's used the cutting ability of her string to gruesomely wound her opponents, severing ears and nails[13] for instance. Jolyne also has a vindictive side and repays tenfold any wrong committed against her, notably indirectly cutting Romeo's tongue for betraying her,[14] moreover, Jolyne still holds a little grudge against Gwess, her first enemy and wants nothing to do with her despite the latter's effort to behave in front of Jolyne.

Jolyne possesses a fierce determination, carrying her through several battles and inspiring her companions. After learning of DIO's plan, Jolyne took pride in her lineage and opted to continue Jotaro's effort to seal the menace DIO left behind him. Jolyne stoically endures the hardships she faces and carry on her goal, disregarding the suffering[15] and possible risks. Her determination is so great that she was willing to lose a limb or even her life to defeat her enemy and save her comrades, an inclination especially prevalent in her that culminated in her sacrifice to get Emporio away from Pucci.[16] Even still, Jolyne once expressed her doubts about being able to stop Pucci after Weather Report's death and the priest's second escape.

Common in her lineage, Jolyne has honorable morals and treasures her family and friends. She would selflessly do everything in her power to help her companions and random victimized people, once helping a fellow mistreated prisoner to take back stolen money from her tormentors.[17] Jolyne is willing to believe in the good in people, which resulted in a share of betrayals, but also earned her F.F.'s friendship.[18] Jolyne is especially sweet to Emporio, her real first ally in Green Dolphin Street, and despite its status as an enemy, she didn't want to kill the Green Baby. Jolyne's primary motivation for investigating Whitesnake was her love for her father, and Pucci exploited that affection to escape her the first time.

Outside of combat, Jolyne behaves like an average young woman, if not a teenage girl, hanging out with her friends and occupying herself the best she can in the prison, as she is also fun-loving. Jolyne notably played ball with F.F. and Ermes,[19] and made herself a navel ring while in isolation.[20] Unlike her father, Jolyne is rather extroverted and easily expresses her feelings to others. She is a sociable woman and can converse with her fellow prisoners easily, asking for explanations about the ins and outs of Green Dolphin Street.

Araki created Jolyne with the hopes of "making up" for his previous (and in his eyes, failed) attempt at a female protagonist. Aside from offering an interesting contrast to most shonen comics, he thinks she is a "real woman" sorely lacking in the medium. The role reversal between her and her father was devised for her character to go beyond the typical archetypes found in Japanese fiction.[23] 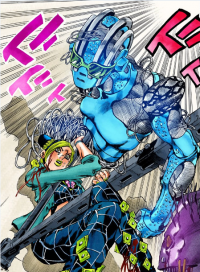 Jolyne's intelligence is intuitive to a degree, as she often shrugs off some of her moves as dumb luck,[25] although it is a valid interpretation of her actions. 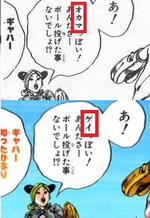