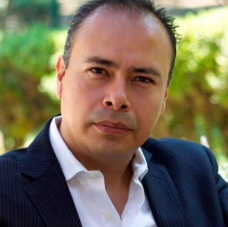 He is also well known for voicing Loki in the MCU, Satoru Gojo in Jujutsu Kaisen, Neji Hyuga in Naruto, and Andromeda Shun in Saint Seiya.

José Gilberto, born on February 10, 1977, at Ciudad de México, began his career in voice acting at the age of 32 years in 1990. José comes from a family dedicated to voice acting and translating. His mother (Banny Barrero), uncle (Jesús Barrero[1]), cousins (Víctor Covarrubias and Yectli Barrero Palestino) and second cousin (Víctor Covarrubias Jr.) are all voice actors. He has shared characters with his uncle Jesús, which he would later replace in several of this roles after the passing of the latter[2]. He also works at a radio station through Digital Media Radio, where he leads the program "El Compló, Un programa de Hombres... para Mujeres", alongside Carlos Segundo and Carlos Olizar, fellow voice actors.