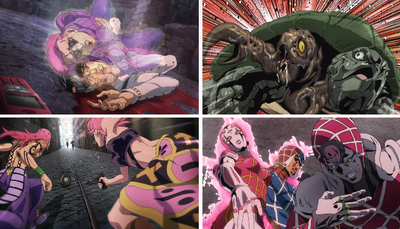 Diavolo Surfaces (ディアボロ浮上, Diaboro Fujō)[1] is the thirty-sixth episode of Golden Wind and the one-hundred-forty-ninth episode of the JoJo's Bizarre Adventure anime. The episode covers from the end of Chapter 578 to Chapter 583 of the original manga.

In the streets of Rome, Team Bucciarati try to snatch the Arrow from Chariot Requiem. However, it becomes clear that Diavolo is closer than anyone of them dares suspect.

In the Colosseum, it is revealed that Doppio was in Bucciarati's body all along. Having seen the body that Diavolo has gone into their souls were dragged out of their body, Doppio is confident that victory is guaranteed. Dying from his wounds, Doppio feels lonely and awaits a call from his Boss.

After Polnareff grabs the Arrow, Chariot Requiem spurs into action and rushes toward Coco Jumbo, leaving only Mista able to protect him. Mista draws his revolver but it has inexplicably broken. Fortunately, Mista draws another gun he's stolen from a policeman and shoots Chariot in the face, protecting Polnareff although Chariot Requiem retakes the Arrow. During the reprieve, Mista asks Sex Pistols why the cylinder broke, to which No.5 suggests that Diavolo may have broken it, which worries the group and the rest of Sex Pistols dismiss the idea. Chariot Requiem gets back up but still comes to attack Polnareff since he's touched and Arrow. Mista and Giorno cripple Chariot but it doggedly continues to pursue Mista and Polnareff. Mista tries to take refuge up a lamp post but one of Chariot Requiem's hands emerges from inside the post to touch Polnareff and it then inexplicably stops its attack.

The team initially is confused by Chariot Requiem's erratic actions, but Polnareff finally realize Chariot Requiem's ultimate ability. It is revealed that another "thing" is growing out of Polnareff's turtle body and worse all manners of eldritch creatures start to emerge from other people, including the team. In reality, Chariot Requiem can switch souls with "something else" and Mista is particularly angered about what is happening to them, lashing out on Polnareff before Bucciarati calms him . Unbeknownst to the team, Diavolo's soul is near and has discovered the way to defeat Chariot Requiem. He thus patiently waits for Team Bucciarati to come close to it again.

However, Giorno suddenly shouts at the team to stop moving and stay away from each other. Giorno explains that he's examined Mista's discarded revolver and proves that it was sabotaged. Mista points out that nobody has approached them since the Colosseum, to which Giorno agrees, stating that Diavolo's soul must currently be in one of the teammates akin to a form of possession. Giorno explains that Diavolo must not be able to dominate his current host and it is shown that the Boss is pestered by Giorno who has accurately deduced his current state. To detect Diavolo, Giorno thus plans to use Gold Experience to sense how many souls there are in each of them, innocents Polnareff, and uses the Frenchman's dripping blood trick to detect any time erase. After a tense argument with Mista, Giorno approaches Bucciarati, letting blood drop on his hand. Suddenly, time skips and King Crimson appears behind Giorno, severing Gold Experience's hand before he can react. Trish summons Spice Girl to protect Giorno but it is revealed that Diavolo had been hiding with Trish's soul inside Mista's body all this time, moving her body without her noticing. With Spice Girl in the open, King Crimson can now physically dominate her and manipulate Trish's body through it. 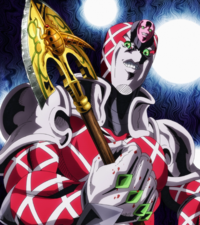 Evading Sticky Fingers, Diavolo begins to run towards Chariot Requiem, making Bucciarati realize Diavolo has a plan. Mista shoots at Diavolo but King Crimson makes evading the bullets effortless despite Mista's best intentions. The team hopelessly runs after the Boss but's already caught up to Chariot Requiem near the Ponte Sant' Angelo while Giorno and Polnareff can only watch from afar. Diavolo turns around Chariot, observing its shadow and discovering that no matter his position, Chariot's shadow will always be opposite from him. He then finally unravels the mystery of Chariot Requiem's nature, discovering that the shadow is in truth the shadow cast by one's soul. King Crimson punches behind Diavolo's head, hitting a small orb of light responsible for casting the shadow and disables Chariot Requiem. Diavolo has taken hold of the Arrow.

"You have made me very angry!"

Giorno suddenly intervenes and turns his blood that has stuck to King Crimson's hand into ants that gnaw at the shaft of the Arrow and make the tip fall on the ground. Mista empties his clip to force King Crimson to defend itself while Sex Pistols ride some bullets to reach the Arrow and knock it back to him, but a corpse suddenly gets in the way of the bullets and also sends the Arrowhead at King Crimson's feet. Bucciarati is still too far and Mista must reload his gun; both are helpless as a "grateful" King Crimson reaches for the Arrowhead. Suddenly, a bullet comes out and knocks the Arrow in the air toward the team. Spice Girl comes out, revealing that she has softened the bullets so that they were merely squashed down and stuck to King Crimson's hand; she then reverted them to overcome her father. Furious, King Crimson punches Spice Girl in the stomach, mortally wounding Trish and sending Mista's body flying toward the Arrowhead. Bucciarati watches on in shock, seeing Trish's soul go limp.