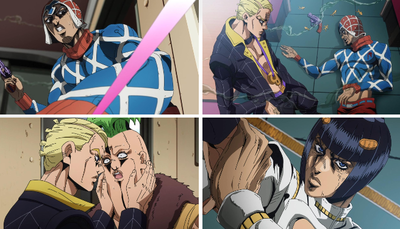 The Grateful Dead, Part 1 ( その①, Za Gureitofuru Deddo Sono 1)[1] is the fifteenth episode of Golden Wind and the one hundred twenty eighth episode of the JoJo's Bizarre Adventure anime. The episode covers from Chapter 490 to Chapter 493 of the original manga.

As Prosciutto's The Grateful Dead is aging everyone in the train, Mista is sent out to stop him. However, his mission is complicated when he encounters Pesci whose fishing rod Stand Beach Boy threatens to sink a metal hook into his heart.

A recap of the last episode relates the context of the fight. Mista, out of the turtle to find the enemy forcibly aging everyone, is ambushed by the fishing hook of Pesci's Beach Boy. In the bar wagon, Pesci calls for Prosciutto as he firmly hooks Mista, the hook itself having sunken deep inside of his hand. Mista sees that it is now crawling up his arm and tries to shoot the line, but it cuts through the bullet and even damages Mista back. Having felt the shock, Pesci identifies Mista and gloats as his line is invulnerable and reflects damage. Reeling the gunslinger into the corridor, Pesci can almost reach Mista's vitals. After his attempt to shoot himself and have Sex Pistols pull the hook proves ineffective, Mista does the unexpected and shoots twice into the door leading to the next wagon to have No. 6 and 7 look for the enemy. Crossing wagons full of aged victims, Sex Pistols reaches the bar. Pesci hides within the crowd but panics when they aim for the ice instead, destroying his lifeline against The Grateful Dead.

Distressed, Pesci drops Beach Boy to gather the remaining bits of ice, freeing Mista from his hook. Out of ice, Pesci decides to run away but one of the old civilians grabs him, forcing him to stay. Mista soon enters the wagon and confronts Pesci at gunpoint, asking him where Pesci's partner is. Suddenly, the same old civilian grabs Mista. Despite the ice, Mista ages as such a fast rate he is disabled before he can aim at the old man, who rejuvenates and is revealed to be Prosciutto in disguise. Prosciutto proceeds to beat Pesci for his cowardice in battle and then lectures him on the determination of the members of the assassination team, finishing by declaring that the only time they talk about killing someone is when the deed is already done. To prove his point, Prosciutto grabs Mista's revolver and shoots him thrice in the head.

Giving Pesci some ice, Prosciutto goes back to the driver's cabin. Inside Coco Jumbo, when Trish tries to treat Narancia with some ice cubes, Bucciarati, already aging himself, tells her to keep the ice for herself. However, the aging is only becoming worse. Trying to think how the enemy could be hiding, Prosciutto asks Pesci about the second life form he's sensed earlier. Discouraged, Pesci meekly refutes his own theory but Prosciutto heartens his junior, reminding him of his potential. Pesci remembers the unknown thing hiding under the seat, but cannot find it anymore. Nonetheless, Prosciutto spots the turtle's dropping and praises Pesci, breaking inside the machinery and finally spotting the turtle. The two assassins gaze inside the jewel and see Trish but then notice that someone is missing: Bucciarati.

Bucciarati drags Prosciutto out of the train through Sticky Finger's zippers

At the same time, Bucciarati sneaks down from the roof of the train through a zipper, having been informed by Sex Pistols No. 6. It is revealed that Mista has survived the headshots, protected by No. 5. Bucciarati almost punches Prosciutto but he feels the wind coming from the hole and blocks the attack. Ensuing a close-quarters battle between Bucciarati and Sticky Fingers against Prosciutto and The Grateful Dead, Pesci on the sideline hesitating about what to do. Bucciarati manages to take the advantage over the two assassins, but the physical effort heats his body to the point the ice becomes ineffective and Bucciarati begins to wither too. In a last ditch attempt, Bucciarati grabs Prosciutto and opens a zipper through the wall, throwing himself and the assassin out of the speeding train.