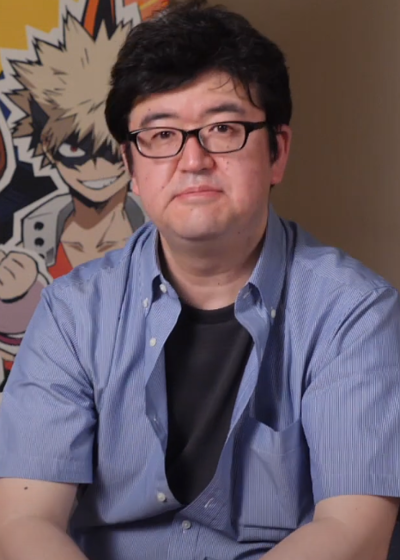 Yoshihiko Umakoshi (馬越 嘉彦, Umakoshi Yoshihiko) is a Japanese animator credited for his work on the animated adaptations of JoJo's Bizarre Adventure. He was a key animator for both the OVA by Studio A.P.P.P. and the TV Anime by David Production.

Umakoashi is a veteran freelance[2] animator born in Hakata-cho, Ehime, Japan. After graduating from Tokyo Animator College, he joined Studio Monsieur Onion (affiliates of Toei Animation) where he was mentored by Junichi Hayama.[3] Around Spring 1991, he transferred to Studio Cockpit alongside Tatsufumi Tamakawa and became freelance in 2011.[2]

Umakoshi is widely known for being the character designer for several animated series, most notably My Hero Academia, Berserk 1997, Casshern Sins, Mushishi, Baki the Grappler, HeartCatch PreCure!, Ojamajo Doremi and Saint Seiya Omega.[1] His key animation is often described by fans as dynamic and expressive, in particular his technique of zooming into the eyes has been coined the "umakoshi eye".

His protégés in the past have included animators like Terumi Nishii and Mitsuko Baba.