Bucciarati Is Coming (ブチャラティが来る, Bucharati ga Kuru) is the second episode of Golden Wind and the one hundred fifteenth episode overall of the JoJo's Bizarre Adventure anime. It covers the first half of Chapter 444 through Chapter 447, as well as the first page of Chapter 448 of the manga.

Giorno's tragic past is revealed. In the present, Giorno now has to fight the gangster Bruno Bucciarati, who too possesses a Stand ability named Sticky Fingers. Inexperienced, Giorno must still defeat Bucciarati to escape the gang's vengeance.

Giorno Giovanna was fathered by DIO with a Japanese woman, who for unknown reasons managed to leave DIO and safely go back to Japan. Giorno's mother was beautiful but neglected her son, leaving him alone in his home while she went partying. Beyond terrified, Giorno couldn't even cry for help. When he was four, Giorno's mother married an Italian man and he went to Italy, but his step-father was revealed to be an abusive man who regularly beat the child when Giorno would attempt to know how he felt. Moreover, Giorno was the perfect target for racist bullies and he came to think he was the scum of the earth, fated to become a hopeless person.

One day, Giorno saw an injured man lying in the shadow of an alley, suspicious men came and asked where the man was, prompting the child to lie as he felt a connection with him. One of the gangsters thought to look in the direction of the alley, but the wounded man was then hidden by herbs, an unwitting awakening of Gold Experience allowing that miracle. From this day on, the grateful man would watch for Giorno, prompting his stepfather to stop beating him, the bullies to suck up to him, and the locals to act nice. This man, the first to treat Giorno like a human being, became his role model. One evening, Giorno also witnessed his hero's darker side: the man had just shot someone. Indeed, he was a gangster with violent methods, but the man he killed was a drug dealer who sold his merchandise to women and even children, justifying his execution as this was an infringement of their code of honor. Despite the drug dealer's son crying in front of them, Giorno only looked up to his hero further. Inspiring himself from the gangster, Giorno would forge a dream to become a "Gang-Star".

A recap of the last episode is shown until Giorno is punched across the funicular by Bruno Bucciarati. Forced to fight for his life, Giorno decides to summon Gold Experience just as Bucciarati dashes in to punch the boy. Bucciarati is punched by Gold Experience and notices that he's become unbelievably fast and strong. Growing confident, he evades Gold Experience and tries to punch Giorno only to see his fist go through Giorno's head. Bucciarati then understands too late that his spirit was overwhelmed by the life energy, creating a delusion of strength while the body remained still. Gold Experience thus punches Bucciarati in the jaw, the gangster feeling a long agonizing moment as the Stand punches one of his teeth out. Thrown at the bottom of the wagon, Bucciarati is now at a disadvantage.

Giorno walks forward as Bucciarati asserts the danger his opponent poses. The gangster understands that Giorno is indeed the culprit, but the misunderstanding can only end in blood for the two determined men. Bucciarati decides to fully summon his Sticky Fingers; ensues a short but intense fistfight showing Bucciarati's advantage in strength. However, the gangster decides to flee and keep his distance anyway. Giorno is forced to pursue Bucciarati in the streets of Naples up to a dark crowded alley. Bucciarati takes advantage of the civilians to disappear, and Giorno understands that one of the citizens is a hiding spot. A fly starts to bother one of them, who swats the fly, only for Bucciarati to emerge out of him, hurt. Giorno had transformed Bucciarati 's tooth into a fly to track down his adversary.

Now in the open, Bucciarati is forced to directly confront Giorno. Flaunting his arm before Giorno, Bucciarati faces off the boy who summons Gold Experience, which punches said arm. Gold Experience jumps in to follow-up on the attack, but Bucciarati surprisingly retaliates and opens up zippers all over Giorno. Indeed, Bucciarati has baited Giorno with the arm of the civilian he attached to himself via his Stand's zippers. When Bucciarati drops the arm and pauses for a moment, Giorno uses the opening to attempt a last ditch attack. Bucciarati, wasting no time moves in to finish Giorno off, before Giorno rips out his unzipped arm so as to get his attack in first and throws it at Bucciarati, who is then influenced by Gold Experience's life energy again. Vulnerable, Bucciarati sees with dread the boy approaching to finish him off, but Giorno stops his attack.

Bucciarati asks why he was spared, but Giorno has seen that Bucciarati was disturbed by the arm of the civilian, full of needle scars due to drug use despite only being thirteen years old. Consequently, Giorno has understood that Bucciarati was a decent man who felt conflicted about the drug flowing in Naples. Explaining his reasons, Giorno claims that from now on, Bucciarati will become his ally in trying to get rid of the drug trade. He finally and boldly announces his intention to overthrow the Boss of the gang, take over the organization and cleanse the city to become a Gang-star. 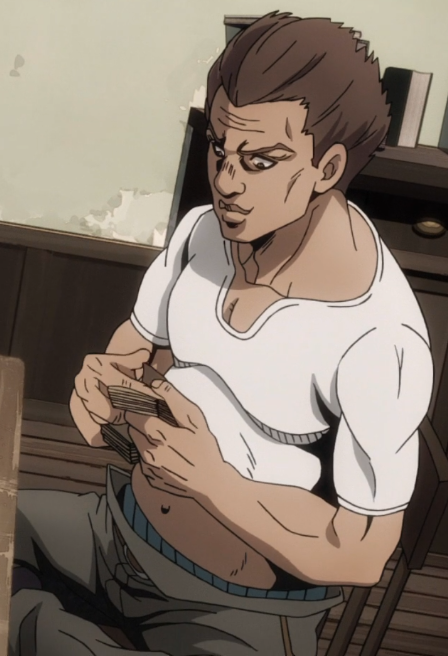 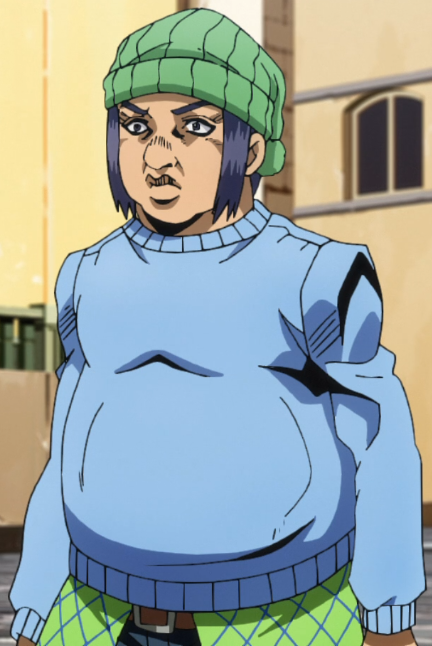