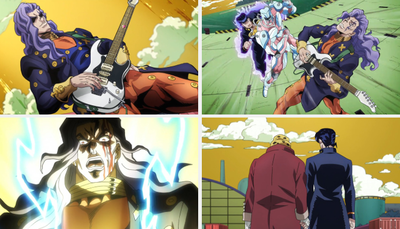 Red Hot Chili Pepper, Part 2 (レッド・ホット・チリ・ペッパー その2, Reddo Hotto Chiri Peppā Sono 2)[1] is the twelfth episode of Diamond is Unbreakable and the eighty-sixth episode of the JoJo's Bizarre Adventure anime. It covers Chapter 311 through Chapter 314 of the manga.

At the port, Jotaro and Okuyasu leave to reach Joseph's boat. It is at this moment that Akira Otoishi, the User of Red Hot Chili Pepper, appears to Josuke in order to kill him.

Jotaro and Okuyasu head off to rendezvous with Joseph's ship while Josuke and Koichi stay on the docks, where they are confronted by Red Hot Chili Pepper's user, Akira Otoishi.

Akira Otoishi reveals himself as a Stand user

Akira Otoishi reveals himself to be a student gifted with an electric guitar and who is stealing from the town's inhabitants thanks to Red Hot Chili Pepper. He arrogantly boasts about his power, but then Josuke breaks his pinky finger to put him back in his place. In reaction, Otoishi performs an angry guitar solo. When Josuke starts the fight, Otoishi hides Red Hot Chili Pepper in the underground wires to launch surprise attacks on Josuke from all directions. Eventually, Josuke manages to turn the surrounding concrete back into coal tar, allowing him to predict Red Hot Chili Pepper's movements and land a punch.

Meanwhile, Okuyasu is now bodyguarding Joseph, who has grown old and is hearing-impaired. When the boat approaches the dock, Koichi and Josuke notice that Otoishi has disappeared. In truth, Otoishi has managed to survive and snuck onto Joseph's boat disguised as a member of the Speedwagon Foundation. When a Speedwagon Foundation rushes to warn Okuyasu and Joseph in their room, he finds Otoishi but Otoishi accuses the man first. Confused by the situation, Okuyasu nonetheless manages to take out Otoishi just before Red Hot Chili Pepper can kill Joseph. He then reveals that he hit Otoishi at random and lucked out. Josuke finally meets his father, the two leave together as the rest of the group watches, touched by the moment.

“
This whole episode can basically be summed up with the guitar scene, since the animation for it monopolized a quarter of the episode's frames. Notice that the position of the fingers is also as realistic as possible, it’s the same notes one would use in real life! Mr. Kato is really committed to the details.

I love the episodes with Okuyasu in them. The part on the boat where Okuyasu tries to guess who’s the real Otoishi brings us back to a gag anime. There’s also this scene where he proposes Josuke to fix the cane and Koichi goes “What are you saying, idiot? You’re really dumb!” My dear Koichi, there's no need to repeat, we get it (laughs)…

Joseph fully enters the story starting from episode 12 and I think that a good number of fans were surprised by his new appearance; he’s changed a lot since part 3. He will show off his capabilities in the next episode, but for the most part, we wanted to really make the audience feel the character’s old age and at the same time the perils he was facing. Unsho Ishizuka, Joseph’s voice actor, really went into his role as an old guy, for instance coughing a lot in the studio during the recordings. He was doing it on purpose, but at least he lightened the mood during recording.