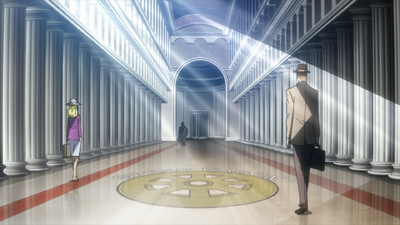 The Speedwagon Foundation (スピードワゴン財団, Supīdowagon Zaidan), often abbreviated as "SPW", is a powerful and influential organization created by Robert E. O. Speedwagon in 1910, funded by the money he made from the oil he discovered in the United States.

It is primarily featured in the second, third, fourth, and sixth parts of the JoJo's Bizarre Adventure series, with an alternate version of the group having a minor role in the seventh and eighth parts.

The foundation dedicates itself to medical research and environmental conservation, but it has also helped the Joestars countless times through intel, supplies, and backup. The foundation also has connections with underworld groups and studies many supernatural phenomena, such as the Pillar Men and Stands.

“
At the beginning of the century, a lone Englishman by the name of Robert E. O. Speedwagon, arrived in the USA and started his own oil business. Because of this he became one of the world's richest men. Speedwagon decided that after his demise, the large sum of his fortune would be used for medical research and wild animal and plant protection. In this organization exists a department called the Supernatural Research Department, which is responsible for supplying the Joestar Family with everything they need. This was the will of Speedwagon, who died in 1952."[2]
”

Their first noted action was the investigation of the ancient Mexican temple where the Pillar Man Santana slumbered. Speedwagon Foundation scientists subsequently sheltered the remains of Santana after his defeat, and uncovered a prediction announcing the awakening of three other Pillar Men in the same year. The foundation's Special Fighting Technological team also fought alongside the Germans against Kars's vampire army.

There are two known headquarters of the Speedwagon Foundation located in Washington, D.C. and Dallas, Texas. However, there are also smaller branches in Tokyo and Meguro, Japan.

In JoJolion, Lucy Steel is a member specializing in botany and geomorphology.[4] In 1901, she's shown in Morioh carrying a suitcase with the Speedwagon Foundation's logo.[5] In 1941, she investigates Morioh once again.[4]

After meeting Lucy, Joseph Joestar travels with her back to America and joins the Speedwagon Foundation as her assistant. In 1952, he meets another member there named Suzi Q.[6]