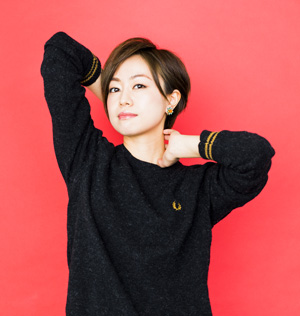 She is also well known for her roles as Kobayashi in Miss Kobayashi's Dragon Maid, Sonya in Kill Me Baby, young Kakashi Hatake in Naruto: Shippuden, Koshiro Izumi in Digimon Adventure tri., Hiro Amanokawa in Digimon Ghost Game, Sayaka Kanamori in Keep Your Hands Off Eizouken!, and Lute in Monster Hunter Stories: Ride On.

Mutsumi Tamura was born in Aomori Prefecture, Japan, before moving to Tokyo where she spent most of her childhood in. Growing up, Tamura expressed interest in voice acting around 3rd to 4th grade after seeing the voice actors' profiles from the Rurouni Kenshin TV anime. She was also a fan of the YuYu Hakusho TV anime.[4] According to Tamura, it was during her high school years when she fully decided to become a voice actress after her drama club coach refused to cast her in male roles. She later attended Japan Narration Acting Institute during her third year high school to pursue a career in voice acting. While attending classes, she worked part-time jobs in order to afford school expenses.[5]

Tamura debuted in 2007 as a young Kyosuke Tsutsumi in the TV anime adaptation of Ef: A Fairy Tale of the Two. She eventually landed the titular role for Battle Spirits: Shounen Toppa Bashin before her breakthrough role as Kobayashi in Miss Kobayashi's Dragon Maid.

Aside from voice acting, Tamura also has a certificate for teaching classes specializing in calligraphy.[6]

Tamura became a fan of JoJo's Bizarre Adventure in middle school during the serialization of Stone Ocean. According to Tamura, after seeing the female characters in the story, she aspired to play empowering roles like them ever since. Like fellow voice actress Mariya Ise, voice actress for F.F., she had also auditioned in the previous seasons of the TV anime only to come up short every time. She had expressed her extreme eagerness in getting the role of Ermes Costello during her audition, to the point that she would repeatedly ask her agent for any news about the Stone Ocean anime adaptation.[7][8] About a year before she auditioned, she climbed Mt. Fuji and made a wish to play as Ermes. When she submitted the tape audition, she also tried playing as Jolyne, but didn't think she sounded cute enough.[8] She later received a call from her manager saying she got the part for Ermes Costello.[9]

Tamura finds the role of Ermes to be fun and challenging because of the scenes where Ermes gets beaten up as well as her inner monologues. Fairouz Ai, who voices Jolyne, looks up to Tamura for inspiration as the more experienced voice actor and compares her presence to Ermes. Alongside Ise, the three of them wore matching hair glitter during the Stone Ocean anime information reveal.[9]