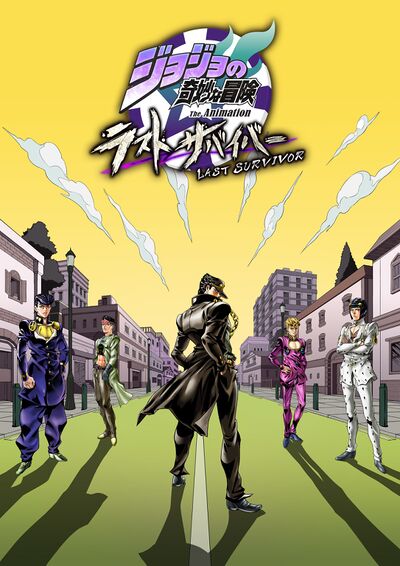 JoJo's Bizarre Adventure: Last Survivor (ジョジョの奇妙な冒険 ラストサバイバー, JoJo no Kimyō na Bōken Rasuto Sabaibā) is a multiplayer battle royale arcade game based on the JoJo's Bizarre Adventure franchise developed by historia and published by Bandai Namco Amusement. The game was first announced on December 18, 2018,[1] and was initially set to release in summer 2019 before its launch was delayed to December 18, 2019.

The arcade machines are equipped with two handles, one for each hand. The left handle has one stick for movement and two shoulder buttons, which are used to summon the player character's Stand (L2) and activate their Ultimate Skill (L1). The right handle has one stick for camera control, as well as four face buttons and two shoulder buttons, which are used to attack (R2) and perform Skill moves (R1). The four face buttons are used to jump (A), crouch (B), investigate areas (X), and show the map (Y). Pushing the left stick in allows the player to dash, while pushing the right stick in opens a selection wheel for Pose emotes. The cabinet display also features a touchscreen, which is used for menu navigation and in-game chat (albeit with only pre-written messages).

Each player controls one character as they roam a vast map and fight other players, with the goal being to outlast every other player. Defeating an enemy player can be done by attacking them until their health bar is depleted, at which point they are either knocked down or eliminated. The map's playable area gradually shrinks as the match continues, eventually forcing players to confront each other.[2] Depending on the game mode selected, players may be split into pairs to fight as allies, gaining the ability to revive an ally if they are knocked down.

Depending on the character selected, each player's moveset can vary dramatically. Generally, however, each character has three attacks: a regular attack, a charge-based Skill move, and an Ultimate Attack. Characters with long-range Stands can deploy and control their Stands independently from them to attack other characters while hiding themselves. To balance the power of each Stand, each move is given a certain number of charges that it can use before needing to recharge. Usually, the player's Skill move and Ultimate Move are locked until the player reaches a certain level. Players level up by collecting soul chips from fallen enemies. Moreover, depending on the character, a stats of the player character will be increased when a certain level is reached.

Exploration is encouraged via the presence of items scattered throughout the map. Three types of cards are hidden throughout the map, and can be picked up to give a player an advantage. Red cards heal a player's life points when picked up; blue cards give the player a shield that absorbs damage. Green cards are trick cards that allow the player to temporarily see through walls.

Any action, from walking to attacking, creates noise that is indicated visually through onomatopoeia, allowing other players to see what is happening nearby. It is possible to sneak around by walking while crouching, however.

DIO
(Greatest High ver.)
The World
From Diamond is Unbreakable 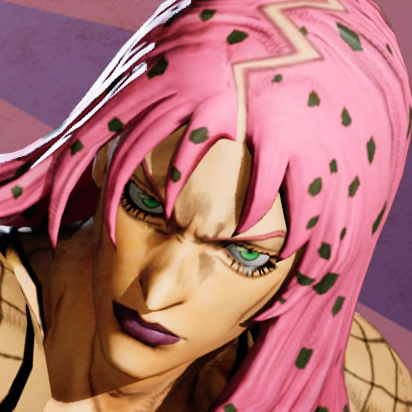 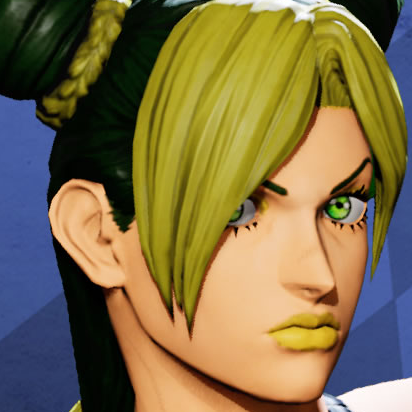 The World
(Greatest High ver.)
DIO
From Diamond is Unbreakable 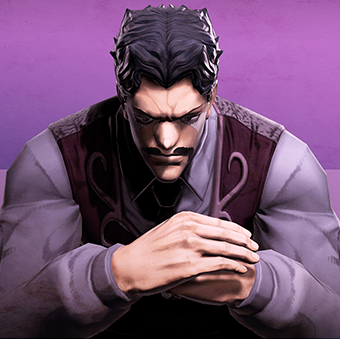 Last Survivor currently has two stages. The stages themselves are quite vast, and each area has several landmarks.

The first stage is downtown Morioh, the game's default stage. Due to the map's size, the game selects one of six areas for the battle to take place in: the rural district area, the Trussardi area, the Angelo Rock area, the Owson area, the Kameyu area, and the train station area.

The second stage, downtown Cairo, was announced on November 24, 2020[3] and was released on December 16 of the same year.[4] Unlike Morioh, the Cairo stage is significantly smaller and only has one possible area to play in.

Promo for the game's PP system

It is possible to play Last Survivor as a guest, but an account must be created to save any collected cosmetic items. These cosmetic items can then be applied by logging into the game's arcade machine with a BANAPASSPORT Card, which can be purchased at arcades that have the game installed.

The game operates using PP (Play Points). By exchanging credits (which cost ¥100 each), the player can receive a certain amount of PP that can be spent in-game. One credit is worth 200 PP, three credits are worth 700 PP, and five credits are worth 1200 PP. 1 PP is subtracted from the player's counter for each second of gameplay, and entering a match requires a minimum of 400 PP. If the player has less than 400 PP, they can either spend their points on Premium Draws or play in Training Mode until the counter reaches 0.

Last Survivor features a gacha mechanic known as Draws, which serves as the principal way to obtain items in-game. The player can either draw a Lucky Draw by spending the tickets they obtain after a match or spend 200PP to draw a Premium Draw, which has a higher chance of obtaining rare items. In either case, three cards are displayed on-screen, of which the player must choose one and receive the cosmetic item behind it. The cosmetic item obtained can be equipped either on the spot or via the game's official website. If the player draws a cosmetic item that they already own, it will be converted into Coins according to its rarity; these Coins can be exchanged for cosmetic items at the Exchange Station on the game's website.

Soul Chip and Title displayed on the game's matching screen

Several varieties of cosmetic items are available to alter each character's appearance and show the player's progress:

Before and After of Okuyasu's house gate