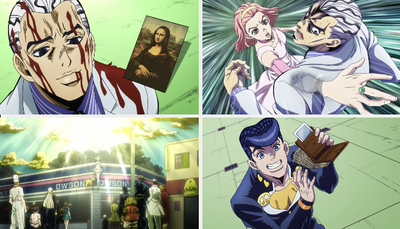 "Goodbye, Morioh – The Heart of Gold"

Goodbye, Morioh - The Golden Heart (さよなら杜王町-黄金の心, Sayonara Moriō-chō - Ōgon no Kokoro) is the thirty-ninth and final episode of Diamond is Unbreakable and the one hundred thirteenth episode of the JoJo's Bizarre Adventure anime. It covers Chapter 436 through Chapter 439.

The final battle against Kira reaches its climax. Surrounded on all side by the heroes, Kira has nonetheless a last chance to escape retribution as a paramedic approaches him.

Kira tells his real name to a paramedic

Having been backed into a corner by Josuke, Okuyasu, and Hayato, Kira is left in disbelief at the prospect that Jotaro might finally catch him. As a paramedic crew who heard the explosion from earlier rushes to aid him, Jotaro, Koichi, and Rohan come to the realization that the man before them is the serial killer they've been searching for.

Seemingly delirious, Kira reveals his identity and his hand fetish to the female paramedic who comes to his side. Hayato suddenly screams for the heroes to stop Kira; he plans to make the paramedic the new host of Bites the Dust and undo his defeat. Rohan tells Jotaro to stop time, but the latter notes that he's too far away to do anything. He runs at Kira as Killer Queen raises its left thumb...

...all for naught, as Bites the Dust activates. Kira gloats at his success, only to realize that he's in an unfamiliar part of town. When he looks at his watch to check the time, he notices that it's still damaged from Stray Cat's air bubble. As he contemplates his situation, he is confronted by Reimi Sugimoto, who reveals that Kira is, in fact, a ghost. At her prodding, Kira starts to remember how he died:

Just before he could activate Bites the Dust, Kira's trigger hand was weighed down by Echoes ACT3. Jotaro then used Star Platinum: The World to stop time, breaking Killer Queen's finger before pummeling the serial killer and his Stand. Once time resumed, a bloodied Kira was thrown by the force of Star Platinum's punches into the path of the paramedics' reversing ambulance, which ran over his head and crushed it in, killing him instantly. The gruesome result horrified everyone, leaving Hayato bittersweet towards the death of the man who killed his father. Meanwhile, the police ask for the dead man's identity, as his face was scraped off by the ambulance's wheel; the female paramedic from earlier identifies him as Yoshikage Kira, all the while oblivious to the fact that he was a murderer.

Kira is damned to hell for eternity

Having remembered his death, Kira's skin starts to crack and bleed as Reimi reveals who she is by showing the wounds he gave her. Kira realizes that Reimi was actually trying to make him turn around and be dragged away by the alley's hands and tries to force her to turn around instead, reverting back to his original appearance. However, Arnold bites Kira's hand and the alley hands tear the killer to shreds, ensuring that Yoshikage Kira will forever spend his afterlife as a damned soul.

Having finally found peace, Reimi and Arnold are able to ascend to heaven, bidding farewell to Koichi, Rohan, and company. Meanwhile, Hayato is left in tears at his home as his mother obliviously waits for her dead husband to return; in a narration, Rohan notes how because of Kira, so many families in Morioh have been left waiting for loved ones that will never come home.

Josuke poses for the last time

With the summer of 1999 coming to a close, everyone is able to return to living normal lives. Among others, Joseph Joestar adopts Shizuka as his own daughter, Jotaro is able to obtain his doctorate after a successful thesis on a starfish he saw on Morioh's beach, Koichi and Yukako now live happily as a couple, Tonio Trussardi's restaurant booms in popularity thanks to Pearl Jam's restorative abilities, and Josuke, Okuyasu, and Koichi continue to hang out as an unbreakable trio of friends. 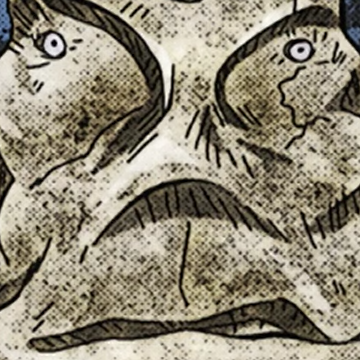 “
For this final episode, I wanted to conclude with Yoshikage Kira being defeated by all of the town's inhabitants. Basically, there wasn’t any particular hero. That is why in the anime, there’s an original scene where Reimi tells the whole cast that they all saved Morioh. I also wanted to draw an epilogue after Reimi’s departure into the sky, so I asked Yasuko Kobayashi, this episode’s writer, to allot some time for that. I hope that by seeing all the faces of Morioh, the viewer will feel a certain nostalgia for having to leave this place. I think we pulled off a very good finale. Going back to the scene where Jotaro stops time, this was actually the first time he's activated Star Platinum while every other character was in motion. I was initially afraid we couldn’t reproduce this part faithfully, but the post-production team did a fantastic job. We’re fortunate that they are here. (laughs) Likewise for the part where Kira thinks he’s triggered Bites the Dust, all the animators worked really hard to animate this scene in a magnificent manner. Everyone gave it their best in this last episode. Not to mention, don’t you think the final storyboard and the directing were also really well done? (laughs)
”
—Naokatsu Tsuda, Blu-Ray limited edition commentaries